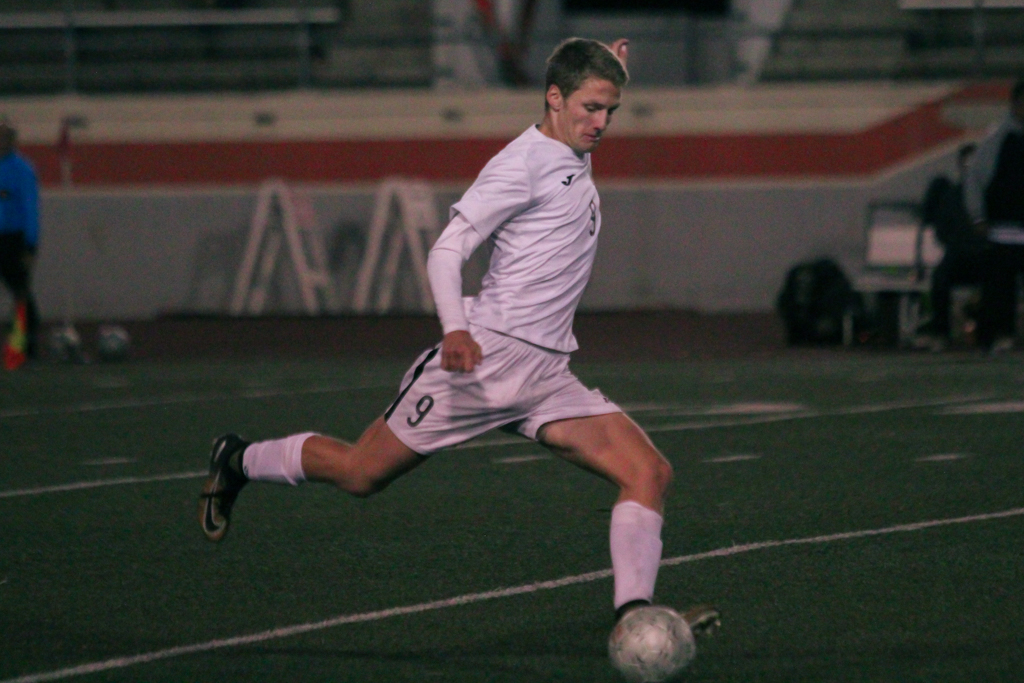 Senior Hank Rainey kicks the ball away from South Pasadena's goal, as the team held its ground against Riverside Prep. The defense was tenacious, as it ate up its adversary and set the groundwork for brilliant offense in the second half. The team will play in the quarterfinals on Saturday.

South Pasadena boys’ soccer continued its postseason run with a 3-0 victory over Riverside Prep at home on Wednesday, February 21. After a slow start, the Tigers exploded for three goals in the second half, electrifying the large South Pasadena audiance. The win propels South Pas into CIF quarterfinals, putting them just two victories away from the finals.

Although the Tigers scored three goals (the team’s highest amount in CIF play), it was their defense that gave them the edge over the Silver Knights. This was apparent in the first half, as Riverside Prep failed to muster a single quality shot. Senior Hank Rainey and junior Addison Foord locked down a high percentage of Silver Knight attacks with physical play and nifty maneuvers. For the ball that did get past the stalwart Tiger defense, senior goalie Jack Gallagher was there to clean it up. Gallagher made multiple key stops, including a diving tackle on a Silver Knight attacker that was on a fast break. The Tigers didn’t have any more luck on offense either, however, sending the game to halftime in a tieless score.

South Pas came out of the break with a newfound intensity, which translated to an early goal. The tie breaking shot came from leading goal scorer, senior Jack Renken, who had utilized his superior speed to brake past two Riverside Prep defenders to open himself up for a goal.

The Tigers continued to strain the Silver Knight defense with shot attempts from junior Jett Donlevy and freshman Caleb Lee. The constant pressure led to another South Pas goal, this time from Lee, who had dribbled past the goalie on a breakaway allowing for a wide open goal. This extended the Tigers’ lead to two and reenergized the South Pas’ players and crowd.

Renken finally put the game out of reach when he scored his second goal of the game, thanks in part to a Riverside Prep miscue. The game ended minutes later, with a 3-0 Tiger win on the scoreboard.

With three straight wins under their belt, the Tigers now find themselves one of the top eight teams in division six CIF Southern Section. South Pas’ next opponent will be Rubidoux, who narrowly won their sweet sixteen matchup in shootouts. Rubidoux is 13-8-3 on the year and finished second in the Mountain Valley League with a 6-3-1 record. The game will take place on Saturday, February 24.