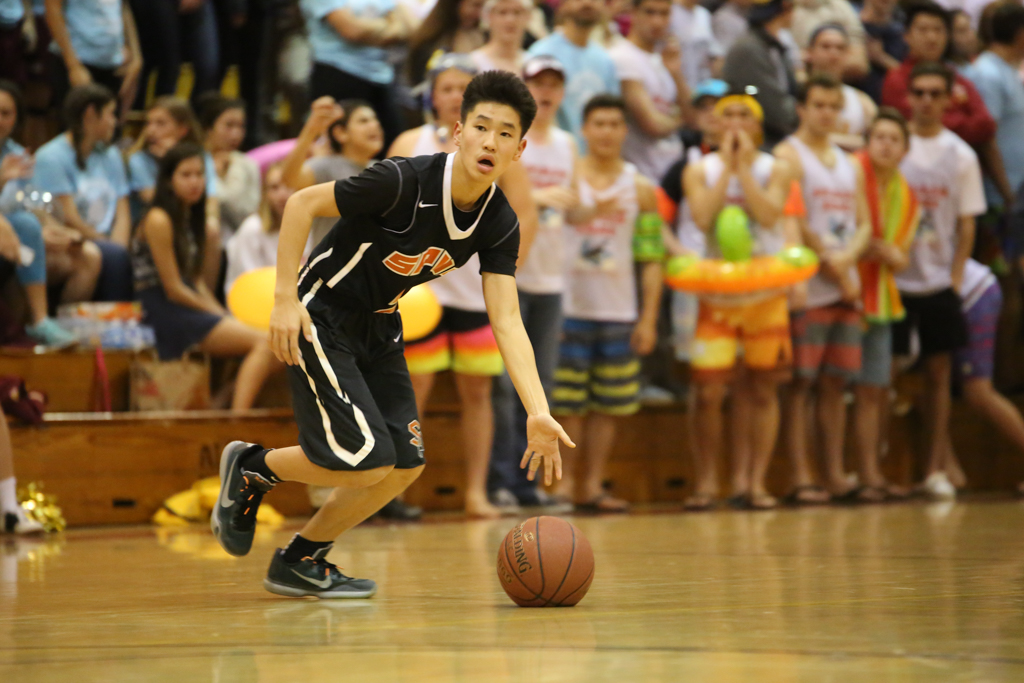 Senior Jaylen Park reaches for the ball while surveying the court. The 54-53 win closes South Pasadena's preseason with a 8-9 record heading into its first game against San Marino.

Boys’ basketball outmatched Schurr 54-53 in epic fashion on Friday, January 3, capping off its 8-9 preseason. The nailbiter demonstrated the defensive prowess of the squad, as it utilized both man and zone coverages to defeat the Spartans. With league matchups approaching, holding a DIII CIF-caliber Schurr squad to 53 points could indicate success against high-quality league opponents.

The Tigers opened the game in full command, forcing several Schurr turnovers and jumping out to a 9-2 lead. After missed opportunities on both sides, the Spartans eventually battled back, narrowing South Pas’ lead to 11-8. The intensity and physicality rapidly increased; grabbing jerseys and clapping in opposing players’ faces became commonplace on the court and the crowd expressed gratuitous emotions on nearly every play. Fouls created multiple chances for Schurr to eliminate the Tigers’ advantage from the free throw line, but the Spartans were unable to consistently drill the 15-foot shot. The first quarter finished with South Pas holding a slim 13-11 lead.

In the first few minutes of the second period, Schurr built on the momentum it gained in the latter half of the first quarter. During their 8-0 run, the Spartans drove hard to the basket time and time again, while the Tigers forced additional unnecessary passes, resulting in steals and turnovers. Fortunately, senior Nick Corvino knocked down a pair of threes, but Schurr responded with a transition attack and dunk that extended its lead to 23-19 and incited vehement emotions from its bench and audience. South Pas managed to rebound before halftime, utilizing strong play on the boards and missed Schurr free throws to tie the game at 23.

Corvino wasted little time adding to his stat line early in the second half, drilling a three and banking a two-pointer off the glass to bring the score to 28-27. As the third quarter progressed, the Tigers retained significant control of the game.  Senior Jaylen Park added a triple and a deuce; Schurr continued to miss free throws. Using its unmatched speed, South Pasadena worked as a cohesive unit to wreak chaos on defense. The Spartans stayed afloat with hasty but accurate shots and quick put-backs after rebounds. South Pas’ advantage slowly augmented, reaching a 42-35 climax after junior Matthew Mayemura dizzied a Schurr defender, pulled up, and swished a mid-range jumper to end the quarter.

The Spartans used a four-point play to halve the 43-35 deficit, before both squads traded several layups and jumpers. Following a Schurr timeout, senior Reno Goudeau brought the Tigers’ lead to 49-45 with an impressive individual effort. Uemura received a pass near the top of the key and drove to the basket, gaining separation with a pivot before lofting a perfect hook shot. After Schurr drilled a three with 1:39 left in regulation, the gravity and tension of each possession skyrocketed. Mayemura stepped up again – literally and figuratively – and the swish of his shot ignited the crowd. The Spartans knocked down a deuce, bringing the score to 52-50, and played exceptional defense on the subsequent South Pasadena inbound play, forcing Corvino to step out of bounds and relinquish possession. On the ensuing opportunity, Schurr hit a three to gain its first lead (53-52) since the opening minute of the second half. With 9.6 seconds remaining on the clock, the entire gymnasium except for 10 players held their breath, looking on with hopes of a glorious victory. Meanwhile, senior Danny Rios took a pass from Park, penetrated the left side and tossed a layup off the glass and into the basket, just as time expired, to give the Tigers the 54-53 win.

Boys’ basketball will face off in its opening league matchup against rival San Marino on Wednesday, January 10, at SMHS at 7:00. The Tigers defeated the Titans 68-65 earlier in the season, creating an intense atmosphere for the matchup.