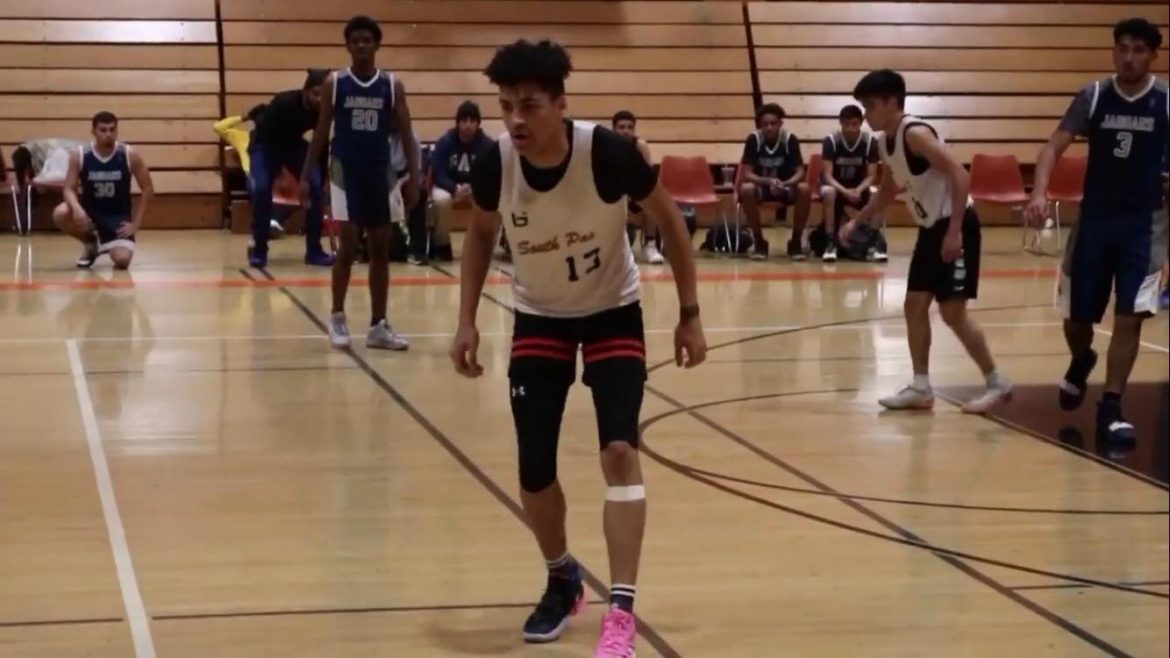 Despite letting the Eagles come back from an early 12-2 lead, the Tigers hung on and managed to come away with the 66-62 victory.

Boys basketball kicked off the season with a victory, defeating the South El Monte Eagles, 66-62, on Monday, Nov. 25.

Behind senior Billy Reed’s 34 points, the Tigers pulled out a nail biting win. Each quarter, South Pas jumped out to an early lead, but allowed South El Monte to creep back into the game. Fellow senior Rodney Ortega, who finished with 13 points, clinched the victory with a late go-ahead three pointer.

From the opening tip, the Tigers took advantage of Reed’s height. Reed scored the first nine points for South Pas — five came from the charity stripe — and gave the team an early 12-2 lead.

The Eagles quickly called a timeout and dropped into a defensive zone, cooling the Tigers off. Offensively, South El Monte began to infiltrate the Tiger defense and eat away at the lead.

With seconds remaining in the first period, South El Monte broke through the South Pas press and finished with an alley-oop layup.

The Tigers entered the second quarter with a slim 17-14 lead. South Pas missed valuable open shots and were unable to stop South El Monte’s post play. The Eagles snatched a one-point lead, but Reed swooped back in and scored five straight to put the Tigers up, 22-18.

Frequent turnovers prevented South Pas from breaking away in the middle of the second. Finally, sophomore JJ Kim knocked down a deep triple, re-energizing the Tigers. Reed opened up an eight-point advantage, swatting an opposing shot off the glass and completing a three-point play on the other end.

However, the Tigers would not score again in the first half. South El Monte climbed back into the game with multiple open looks in the corner, cutting the South Pas lead to 30-29.

Reed continued to dominate in the third quarter. He put up 10 points in seven minutes, including a deep three, a putback, and a baseline reverse layup. Still, the Eagles stuck around and the quarter ended, 47-44, Tigers.

In the beginning of the fourth, Reed picked up a loose ball, flew down the court, and jammed a one-handed slam. The Tigers followed with three pointers from Reed, Ortega, and senior Alan Quan, but turnovers and fouls allowed the Eagles to remain within striking distance.

South El Monte rattled off six unanswered points to tie the game at 60 with under three minutes remaining. With all the momentum with the home team, Ortega silenced the crowd with a triple with just over a minute left.

Kim and junior Amar Ebrahim sank free throws to ice the game and the Tigers escaped with a 66-62 victory.

“We really executed on both ends of the floor and on all the little things we’ve been working on leading up to the season,” Ortega said. “We played as a team and individually everyone did what they had to do to get the win down the stretch.”

The Tigers will compete in the Azusa Basketball Tournament starting Monday, Dec. 2.

Good team but not as good as the testers