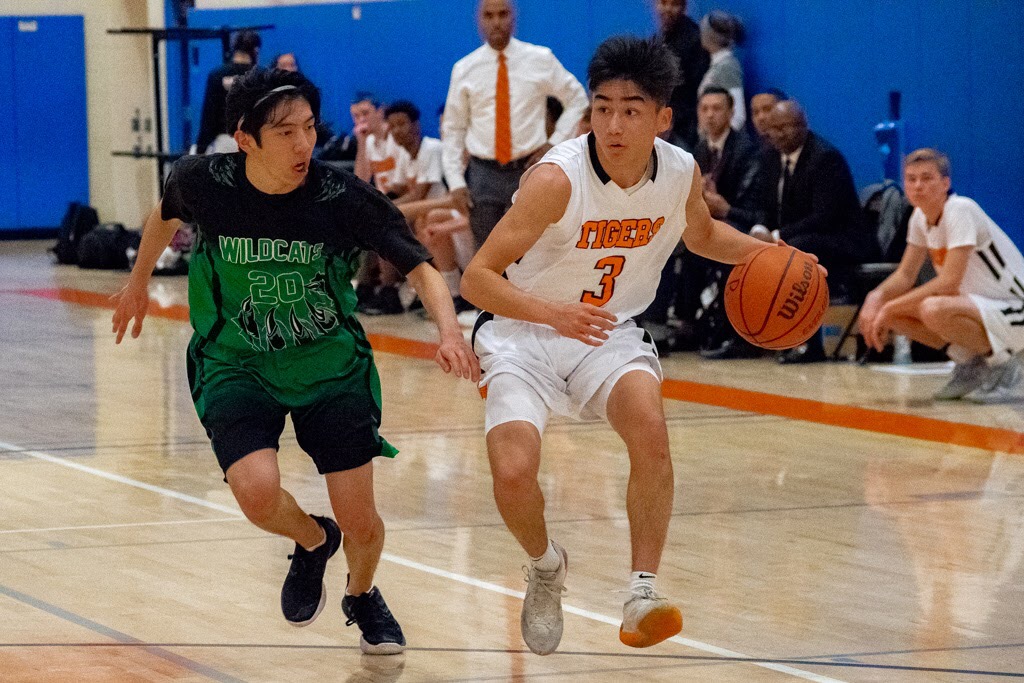 The match was highly contested throughout, with the lead bouncing back and forth between the two sides. But in the end, fouls and turnovers crippled South Pas and Monrovia secured the victory.

From the get go, the Tigers played well, demonstrating strong communication and defense. Senior Preston Sharkey kicked off the game with a three pointer. Sophomore Mikey Ebner followed with a two pointer, all whilst Monrovia hadn’t scored.

But this winning streak was bound to be halted; Monrovia responded with consecutive two pointers and consistently outrebounded South Pas. By the end of the first quarter the score was 14-12, with the Tigers holding on to a slight two-point lead.

Senior Alan Quan began the second with a jumper, but the Wildcats responded right away. The rest of the game continued in this back and forth fashion. South Pas managed to keep Monrovia at bay, leading by a point for the majority of the quarter. However, Monrovia slowly inches closer and after a three pointer, tied the game, 27-27.

Senior Billy Reed III followed up with a two pointer that shortly put South Pas back in the lead. The Tigers increased their energy, but Monrovia continued to play with much more vigor, scoring consecutive two and three pointers. By halftime, the score was sealed at 38-35, with the Wildcats in the lead.

The third quarter began with a demonstration of strong Monrovia shooting; the Wildcats increased their lead to 40-35. Poor shooting plagued the Tigers and despite great plays and passes, the ball continued to bounce off the rim. But the Tigers were not yet demoralized and kept the game within reach.

Sophomore Johnny Guy finally got a triple to fall and delivered a three pointer that put the Tigers in front, 51-50, at the close of the third quarter.

In the fourth, the Tigers increased their defensive aggression, resulting in multiple whistles. Monrovia took advantage of its time at the charity stripe, demonstrating their shooting skills and putting themselves in the lead, 57-53.

Instead of bouncing back, the Tigers began to suffer from turnovers. Two consecutive Monrovia two pointers increased their lead buried South Pas and the Tigers fell, 68-62.

“Tonight’s game was one that all of us wish we had back. We failed to adjust to what Monrovia was doing, even though our coaching staff told us what to do multiple times,” Quan said. “All of us players just have to execute better and play with more heart, especially on what could be our last home game.”

The team will face off San Marino in their final league game on Thursday, Feb. 6.