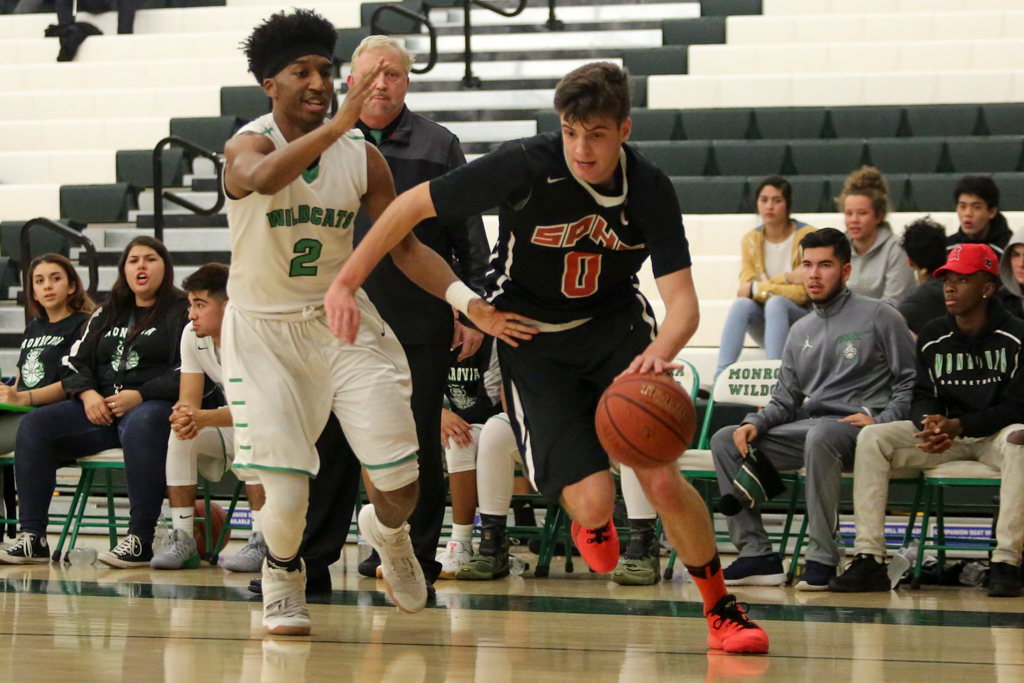 The boys’ basketball team lost its first league game of the season to the Monrovia Wildcats, 51-49, on Wednesday, January 11. South Pas’ pep squad and cheering fan base served as an eloquent backdrop for their compelling loss. The luster and lore of league tip-off was fully present while South Pas displayed their dangerous, momentum-fueled offense against the Wildcats.  Despite their record being at 0-1, the narrow loss serves as a cordial reminder that South Pasadena is once again a force in the Rio Hondo.

The team took a commanding lead shortly after behind a huge performance from Fox, who finished the first half with 11 points.  The 6’3” Chicago-native rained three’s over Monrovia, as he ran wild in the second quarter. He and Scholtz commanded South Pas’ powerful fast break while they stormed open lanes and finished across planted defenders. The team assaulted the Wildcats with raw talent and potential, sending their opponents into confusion. Despite South Pas’ dominant first half, poor transition coverage allowed Monrovia to cut a nine point lead and finish the half nipping at the Tigers’ fast-moving heels.

There were many moments in the second half when the momentum of the game hung freely between the two hard-hitting foes.  The teams exchanged crushing blows in the form of knock-down three’s and long, drawn out possessions. They went to the fourth quarter tied, 35-35, with the game hinging on the final minutes of regulation. As the groups circled around their respective head coaches between quarters, the tension raised in Monrovia’s cavernous gym.

Emotions swung, as the Wildcats took a sizable lead early in the fourth. Fox and the boys remained calm, despite the dwindling clock, while they slowly chipped away at the deficit.  Scholtz continued to bulldoze through Monrovia’s defense with cold-blooded drives in the paint.  His big performance was fueled by momentum-changing turnovers from junior Jaylen Park, and two big scores from the Chi-boy. Despite the valiant Tiger effort, the game was ultimately decided by an open lane, and one enormous Monrovia layup with 13 seconds remaining.

Scholtz let the team with 18 points in the brutal loss. His co-captain, Fox, completed the game with a total of 15. The entire team contributed, with junior Benjamin Kent, senior Stone Franco, and Park, all scoring five points individually. Junior Danny Rios also scored on a big uncontested three in the third quarter.

The team will prepare to bounce back on Friday, January 13, for their home-opener against the Temple City Rams.