Boys’ basketball falls to Mark Keppel in it season opener 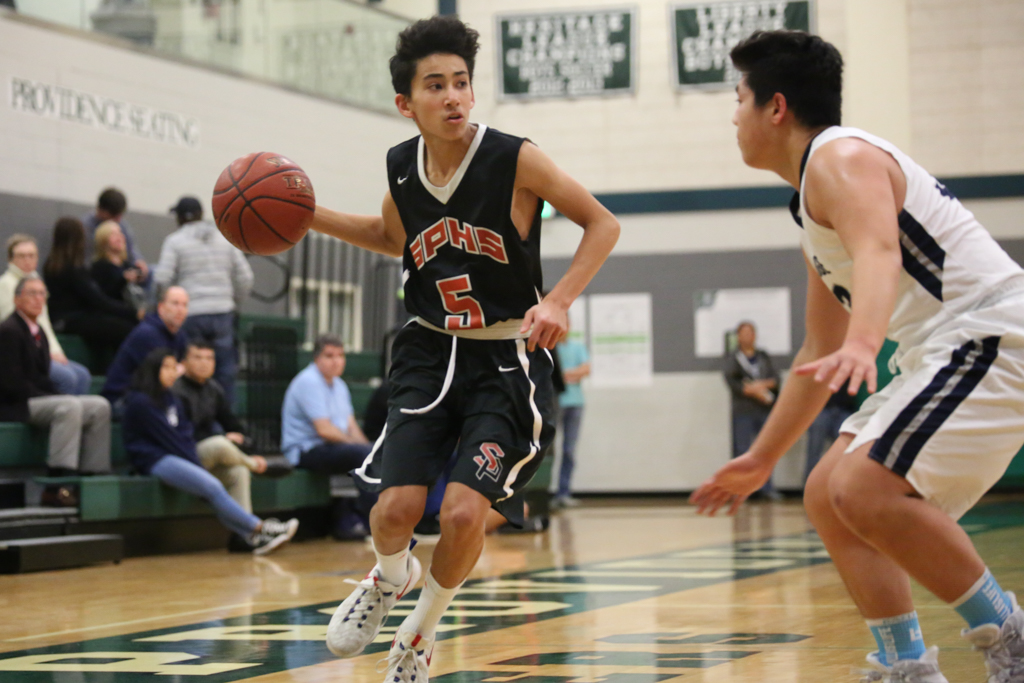 Senior Nick Corvino dribbles the ball while evading a defender.

In its opening game, boys’ basketball was defeated 72-57 by Mark Keppel on Friday, November 24, in a valiant effort. Talented seniors took command of the offense, firing numerous shots from deep. Unfortunately, this couldn’t compensate for the Aztecs’ dominant attack, which tallied 72 points: the Tigers allowed more than that just twice last year.

Mark Keppel’s energy overwhelmed South Pas early on, as the Aztecs utilized their height advantage to score multiple buckets in the paint. A balanced Tiger attack drilled threes,  decreasing the deficit, but Mark Keppel’s offense was too powerful. The Aztecs continued to exert their dominance in the paint, forcing 12 fouls and totaling 26 points by the end of the eight-minute quarter.

Defenses started to awake in the second period; South Pas’ structure prevented the Aztecs from maintaining its commanding inside presence, while Mark Keppel severely limited the number of shots taken by the Tigers. The first half closed with Mark Keppel holding a daunting 42-23 lead.

Senior Danny Rios lead the South Pas charge in the third quarter, nailing threes on the perimeter and driving inside to force fouls. The Aztecs neutralized the Tigers’ efforts, capitalizing on South Pas turnovers and displaying gritty offense in the paint. Down by 24 entering the fourth quarter, the Tigers had a renewed sense of urgency. Rios continued to showcase his offensive prowess, knocking down threes and free throws alongside senior Nick Corvino, who added two threes of his own. The dynamic duo combined for 15 of the team’s 21 points in the fourth period, with the remaining six coming from a brilliant effort by junior Ryan Chuang.

Although the preseason defeat as a whole carries negative implications under recently adapted CIF rules, the first and fourth quarter gave indications of the offensive talent the Tigers possess. If South Pas can limit opponents’ dominance as evidenced by the second and fourth quarters, success is on the horizon for the Tigers.

Boys’ basketball will compete in the AGBU/Canoga Park-Providence Tournament on Tuesday, November 28, at Providence High School in Burbank. The competition, which comprises solid squads, will be quality preparation for more talented Rio Hondo opponents.