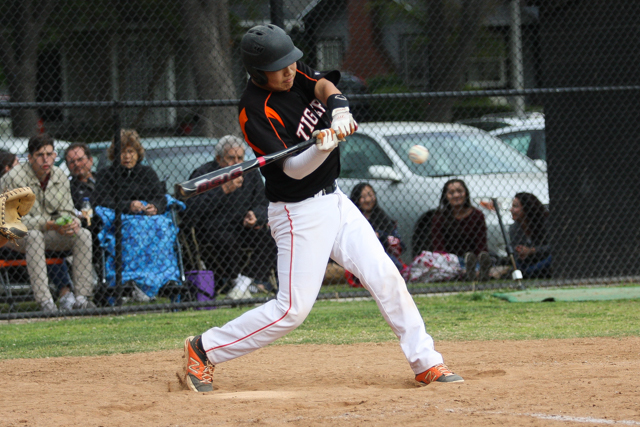 The boys’ baseball team lost Wednesday’s final home game against Temple City High School by a final score of 1-6. The team now has a Rio Hondo League record of 2-9.

The Tigers were in high hopes starting the game off. Drawing first blood from the Rams, senior Andrew Shults walked home in the first inning after teammate Paul Amerine recorded a base on balls. The Tigers would maintain defensive dominance for majority of the game behind their senior starting lineup.

Although both teams had trouble converting, the Tigers would take the lead heading into the fifth. Desperate to tally up their own runs, the Rams scored an equalizer in the sixth inning with a single up the middle.

From there, the Tigers’ defense slowly crumbled from the Rams’ repeated hits in the outfield. With the seventh inning rolling out, the pressure proved too much for the Tigers with the Rams taking the lead. Now up, Temple City began their own scoring frenzy after multiple errors on defense drove the score to five additional runs. In a last ditch effort, South Pas threw everything they had on offense. Although the boys managed to get Shults to third base, the Tigers couldn’t get any farther, and the Rams closed out the game with a 1-6 win.

The Tigers hope to notch a win at Temple City in the team’s final matchup of the season tomorrow, May 7.