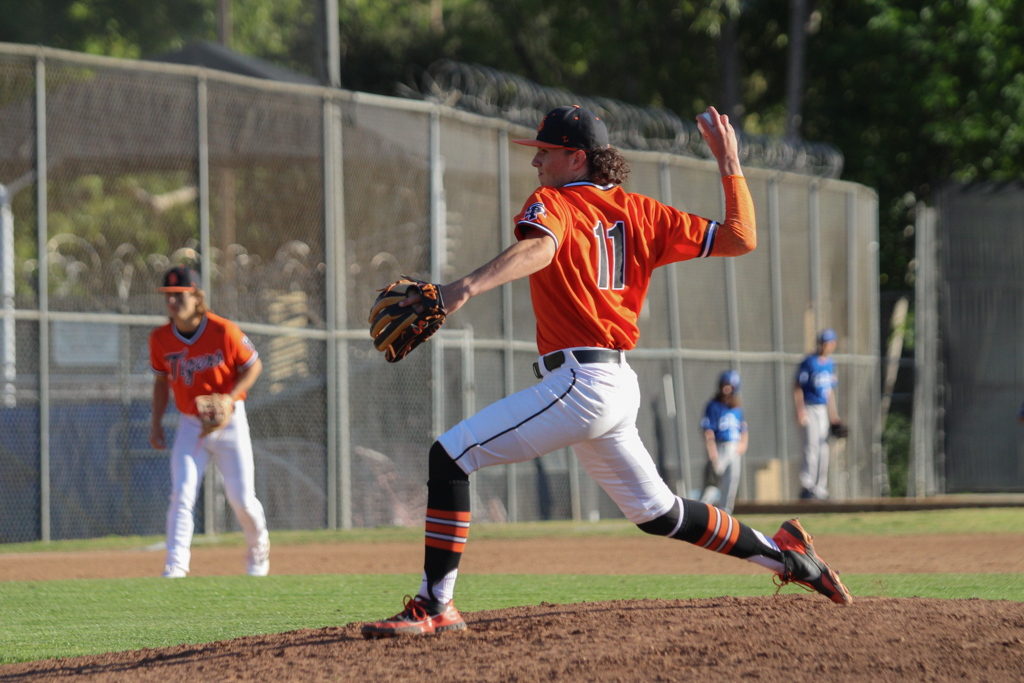 The Tigers had a good start, but by the end of the first, they started trailing and never recovered.

Varsity baseball lost its third league game to the Temple City Rams on Friday, March 11. Hindered by inconsistent defense and stagnant hitting, the Tigers lost their early lead and eventually ended the game 11-4, leaving them at 1-3 in the league.

Though the Tigers played a strong first inning to take a 2-1 lead, multiple errors and miscommunications in the second left South Pas scrambling to regain their footing. Sophomore Nolan Adams had a solid outing, but the Tigers’ defense failed to support him. A key error in the second inning allowed three Temple City runners to score: the ball getting past the left fielder and rolling all the way to the wall. The Tigers trailed 4-2.

Temple City held the Tigers off the scoreboard in a quick third inning. In the Rams’ half of the inning, they cut into the deficit with a run.

South Pas made a good effort to recover in the fourth. Sophomore Devin Robinson singled on the first pitch of his at-bat, allowing him to reach first base. Junior Quinn Stirling followed, hitting the ball hard, but right into a Rams’ glove. Robinson then stole second base. Senior Alex Hodis ripped a single, allowing Robinson to score from second. Adams and sophomore Luke Riffle tried to continue this offensive push but were unsuccessful.

The Tigers struggled defensively in the fourth inning, letting in another three runs. A mistake in the outfield let Temple City score another two runs, which was shortly followed by a third when an infielder committed an error.

The fifth inning saw the Tigers maintaining their offensive firepower. Senior Jack Riffle, with one ball and one strike, blasted a fastball over the fence. The ball flew off his bat and landed 370 feet later as a home run.

South Pas improved their defense in the bottom half of the fifth, with great plays by Hodis and J. Riffle keeping the inning short and scoreless.

The sixth inning was fruitless for the Tigers, though they had several good scoring opportunities. Stirling crushed a pitch on full-count that one-hopped against the wall and landed him safely at third; however, he was stranded there.

South Pas’ defense struggled in the bottom of the six, with outfielders failing to catch fly balls. The Tigers swapped Adams for junior Ben Petrillo in a last-minute effort to prevent Temple City from increasing their lead, but this was in vain as the Tigers ended the sixth 11-4. That score would old after the seventh

“I think we need to improve by just [having] more energy, more focus, [and] a better pre-game. I think we started off well and then we died off,” Stirling said.

The Tigers were unable to regain their initial lead and lost 11-4. This loss comes as a hard blow after their recent win against San Marino. The Tigers will play their next league game against the Monrovia Wildcats on Tuesday, March 15.