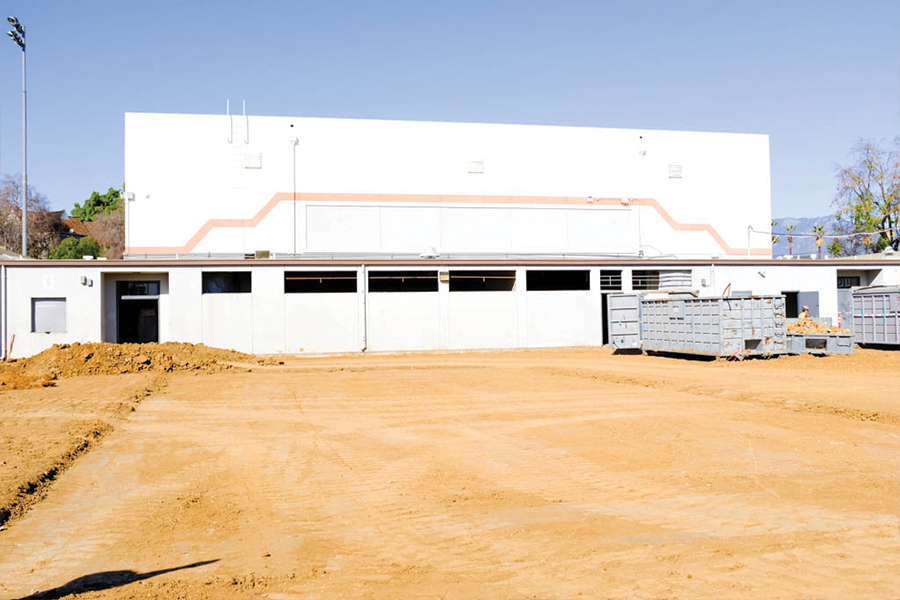 The project's new field house location has been outlined in preparation for the laying of foundation.

SPUSD’s multi-million dollar athletics and gym site construction project is in the final stages of the demolition process. The district broke ground on the renovation in November 2019, which will focus on refurbishing the main gym and practice gym, construction of a new field house and visitor bleachers, and new basketball and tennis courts.

The project will replace and modernize the main gym’s floors, locker rooms, bathrooms and bleachers. The gym’s color scheme and main components, like the Alma Mater sign and scoreboard, will remain the same.

SPEF also plans to auction off historic parts of the main gym to South Pasadena residents, including the center court floorboard medallion that was installed when the gym first opened in September 1955.

Outside of the gym, the project will replace the visitor grandstands as well as a new field house next to the gym. The grandstands will become permanent stands for visitors, unlike the previous leased ones. The field house will include a training room, a film room for team and sports medicine use, and storage space for athletic equipment.

Currently, the construction team is finishing up demolition of the tennis courts and gym and are moving on to surveying the land. The slab foundation of the basketball courts has also been completed and certified, while an outline of the location for the fieldhouse has been drawn outside of the main gym.

“We had to dig down to the bottom of the hardest dirt (5-8 feet down) [for the tennis courts] and build up from there,” Webber said.

The gym hasn’t been remodeled since the 1950s, so while demolishing the interior, the team encountered several obstacles. Asbestos, a commonly used insulation when the gym was built, was found in the ceiling of the gym. Due to the hazardous nature of the substance, special containers were needed to isolate it on the construction site.

The team is about 90 percent completed with demolition and construction and it is estimated that the team will complete the project by the end of August 2020.