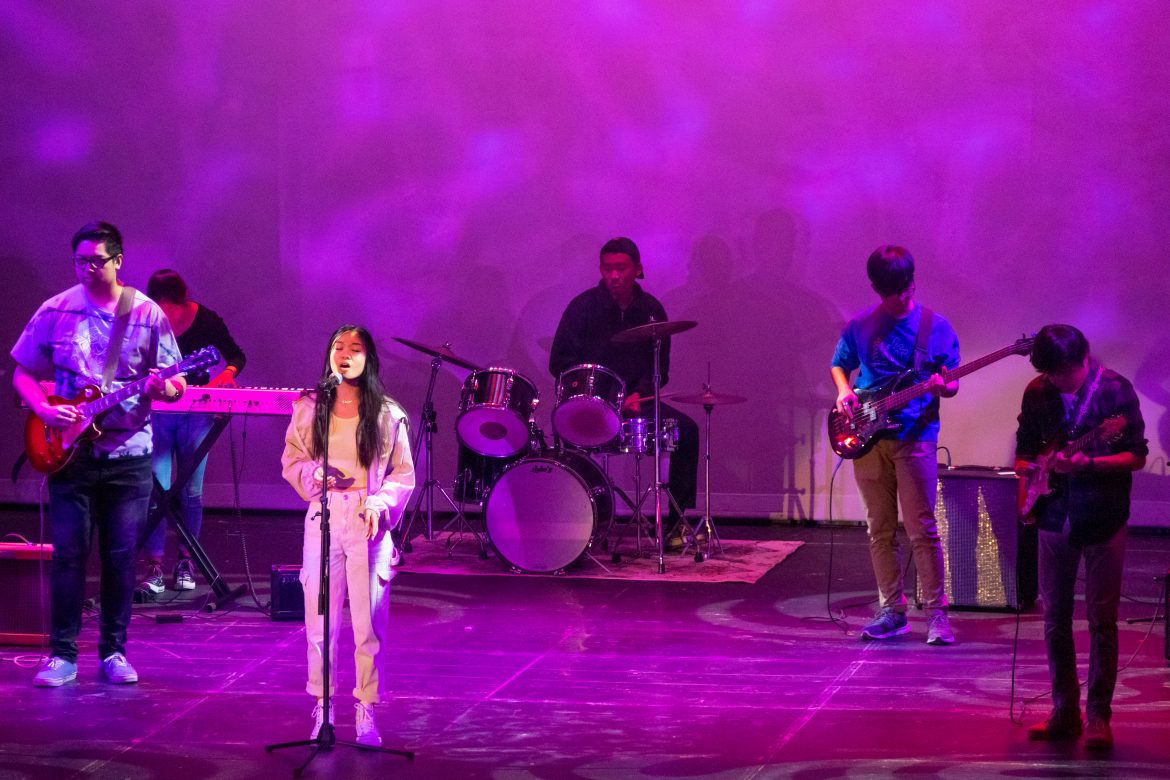 "Purple Sky" closed out the show with their original song.

Students rushed into the auditorium for the annual Talent Show assembly on Thursday, Feb. 13, to witness their peers display a variety of talents. This year ASB recruited a diverse set of acts, presenting nine multicultural performances ranging from traditional Māori dance to popular Mandarin and Cantonese songs.

The “Those Bygone Years Choir” sang a medley of Mandarin and Cantonese songs such as “Fairy Tale”  by Michael Wong and “Red Sun” by Hacken Lee. Juniors Sean Feng and Thompson Yang and seniors Dana Lin and Erin Wang led the performance, swaying arm in arm under a lowered projector displaying lyrics and a video montage.

Senior Serenda Camarillo then moved the audience with her cover of “If I Ain’t Got You” by Alicia Keys. Winning third at last year’s Talent Show, she conveyed her song with much emotion, dedicating the performance to a special person sitting out there in the crowd.

“This year’s assembly is definitely more unique than previous years,” Activities Director Casey Shotwell said. “The talent show included different forms of art that we’ve never seen, from the Chinese choir to Maori poi dance. Although we had numerous dance performances, they all varied in style and appeal. Moreover, both bands were exemplary; they were powerful, memorable, and showed great originality and talent.”

Tam and Timmerman’s Color Guard performance took hours of practice, first performing their piece at the dance concert in December 2019. This year’s Talent Show is particularly special for Tam, as it marks the last time the pair will perform on stage together before graduation.

“‘Performing “Ocean Eyes’ with my best friend is something I will cherish forever,” Tam said. “Our piece is about leaving high school and missing each other when we do so… I will probably never perform this piece again, which breaks my heart, but I will carry with me this feeling of happiness, warmth, and nostalgia when I think about our performance.”

The talent show winners will be announced next week and the first place performer will receive a $100 prize.