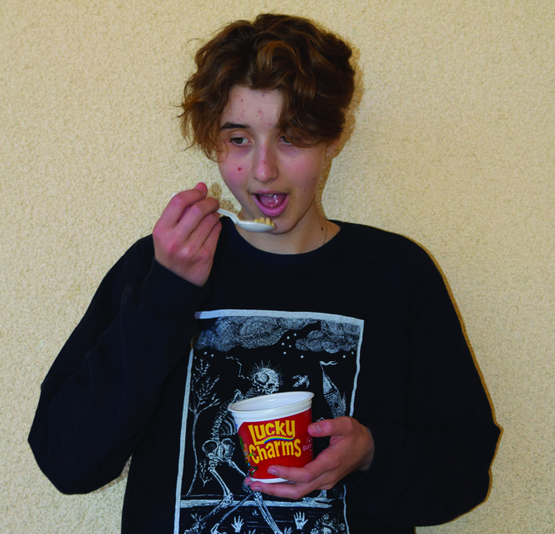 Quick to share a witty joke or story, Julian Lorenz's magnetic energy draws his peers to his presence as a natural performer.

Sophomore Remy Luz Julian Lorenz sweetened his tea with three packets of artificial sweetener after politely returning the plastic lid and straws. Prompted by a question that asked why his leather wallet looked like it had been through the wash, (which, it turns out, it had) Julian Lorenz launched into an animated impromptu about “jean day” and his dad’s second fridge. His personability and quick wit drew his listeners in as he bounced from one funny two line anecdotal to the next in between questions about being new to South Pas, growing up, and finding his place in high school.

Julian Lorenz moved to SPHS from Avison Charter School at the beginning of last year. When selecting his courses for freshman year, he chose Speech and Debate. It suited his sensibilities, giving him a platform to write, speak, and think critically. Julian Lorenz included himself in a group of students that was truly devoted to the class’ success and fully utilized the built-in community and opportunities for public speech. His determination to succeed in a new environment, natural charisma and knack for storytelling set him apart from his classmates early in the school year when he won first place in Original oratory (OO) at Fall Novice, one of his first competitions in Speech and Debate.

“Doing speech and debate makes me feel like I can tell people to [care] about me. When I first started speech and debate, I was still kind of weird and quiet and shy… I just didn’t know how to make myself a presence. But when I started speaking in public, and started getting good at it, I realized how much I needed a way to express my thoughts. When I wrote my first OO (original oratory), I had just gotten out of some wack [stuff] and hadn’t processed it yet. But, writing an OO about it made me understand it in a practical way.  It’s been easier to articulate my feelings, because now I think about it in the way I would explain it to a room full of judges,” said Julian Lorenz said.

Julian Lorenz charming personality and growing confidence is something he jokingly plays off as self-inflation, but it’s played a big part in his seamless transition into the SPHS student body. He’s a delegate in Youth and Government and is an alto in the school choir. His efforts in Speech and Debate last year paid off and have earned him the position of Assistant Captain. Julian Lorenz has not taken these opportunities for granted. His level of engagement is the result of an impressive go-getter attitude and a dedication to excelling in what he chooses to pursue.

“Before I went to South Pas I went to a school that was in a renovated dentists office in the middle of an intersection that was practically the size of the library. The first thing I noticed when I got here was how many good looking people there were here. I know it’s hard to see when you’ve known your classmates for a really long time, but since I came from the school equivalent of an Amish community, it was a big change. Also people were shockingly friendly to me, and I’m really grateful that I wasn’t seen as an outcast.”

Julian Lorenz’s adaptability has served him well. He’s looking forward to further strengthening the Speech and Debate program as Captain his senior year. In the meantime, he will continue teaching, competing, speaking, and making the people around him laugh.

SPUSD to extend closure until May 5