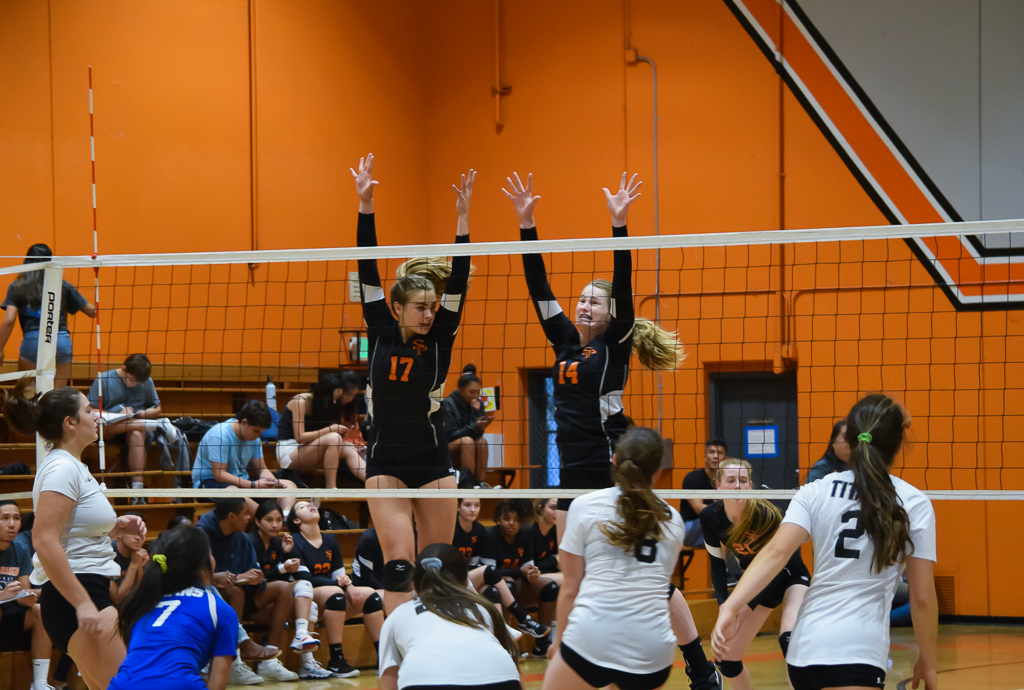 The Tigers eeked past the Titans in the fourth set, 25-21, to bring home the victory.

South Pas started off the game strong with a successful first set. The set was close throughout, with the Tigers and Titans both grabbing the lead at different times. During the drawn out rallies, junior libero Lindsey Hirano dove for every ball securing a strong lead for the Tigers. Junior Lexi Schroeder delivered powerful serves and San Marino made an effort to fight back, but were no match for South Pas’ amazing defense. To end the set, freshman Ava Dorny completed a strong spike, allowing the Tigers to win 25-20.

In the second set, South Pas lacked prior energy and stamina. The set started off strong for the Tigers, but it didn’t last long. The Titans took advantage of several strong blockers, not allowing any South Pas spikes to come through. South Pas was unable to keep up with the Titan’s rapid kills due to a lack of communication. San Marino won the set 25-14, finishing off with a corner ace.

Eager to beat their rivals, the Tigers made a miraculous comeback and won the third set, 25-15. Although the set had a rocky start, South Pas slowly made a comeback and secured a consistent lead against San Marino. Freshman Sofia Reyes scored numerous points for the Tigers thanks to her fierce serves and excellent passes to junior Lola Foord.

The Tigers’ hard work and determination paid off in the fourth and final set. Throughout the neck and neck set, sophomores Kennedy Taylor and Alyssa Sokolow spiked the ball multiple times, helping South Pas become closer to victory. Once again, the Tigers worked together to strengthen their offense and defeat the Titans. Dorny closed out the set again, spiking the ball and signifying a win for the Tigers 25-21.

“We were really composed and calm throughout the whole game. But towards the end of the game, our energy was not as strong as it should have been” sophomore Abby Garner said.

The Tigers hope to bring home another victory when they face Monrovia at home on Thursday, Sept. 19.