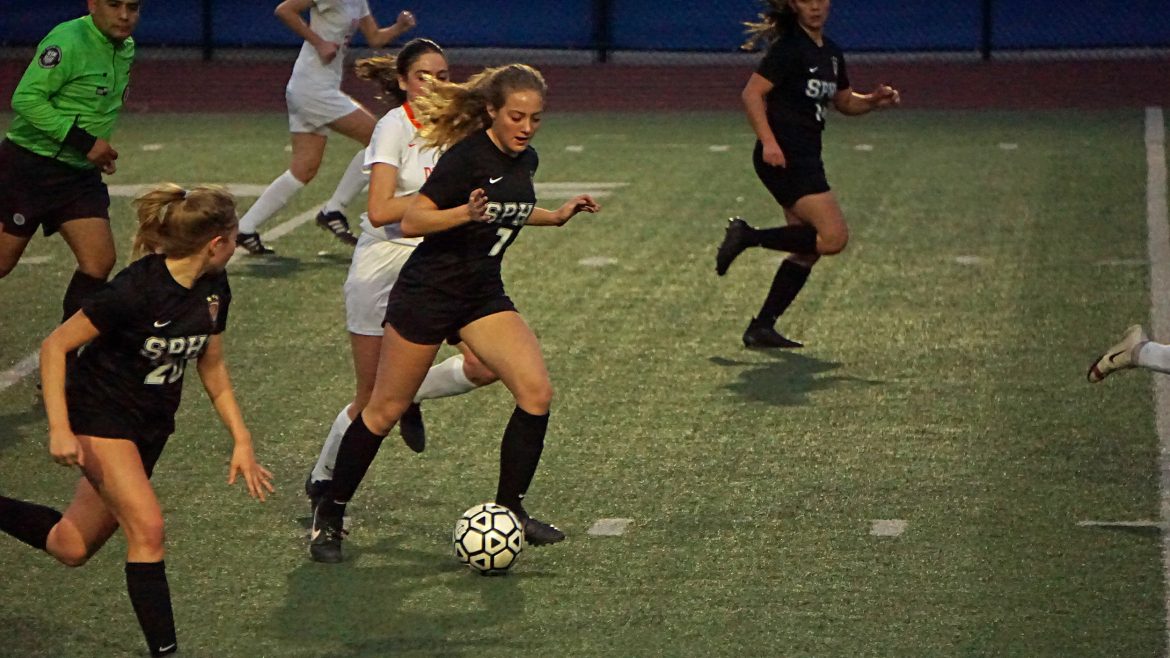 The Tigers relentlessly attacked the Panther back line and finally broke through with two minutes left in the match.

Girls soccer defeated the Polytechnic Panthers 1-0 in the season opener at home on Tuesday, Dec. 3.

The first half was a fierce midfield battle, with neither team gaining a significant upper hand. After half time, Poly controlled most of the play, but the Tigers created problems for the Panthers with repeated counter attacks and a late winner from senior co-captain Chloe Kim sealed South Pas’ first win this season.

South Pas played in a 4-3-3 formation with a high back line, which was critical to stopping Panther breakaways and allowed junior keeper Kate Buckley to come off her line and clear any approaching balls.

Sophomore Ava Dunville and freshman Daniella Lat were both central to the Tiger defense and quickly shut down Poly attacks in the first half, helping South Pas to keep most of the possession.

In the midfield, seniors Chloe Kim and Andrea Castellanos launched forward passes and were key to winning 50-50 balls with their physicality and speed. Castellanos showcased her ball control finesse by initiating the Tigers’ best chance of the first half, impressively weaving through opposing players and passing to senior co-captain Corey Segal, who shot a blistering strike that the Poly goalie barely tipped over the crossbar.

Similarly, Kim maintained possession with clever one-twos in midfield, firing several balls barely over the crossbar and slightly wide from 20 yards out.

The Tigers did well in the first half to shut down Panther offense and clear the ball, but struggled to capitalize on chances in the final third. Because Poly’s back line deflected all of the South Pas crosses, most of Tiger chances came from long shots outside the penalty box. The first half ended scoreless, but South Pas had the advantage in scoring opportunities and possession.

The second half proved to be the opposite of the first, with Poly maintaining the majority of possession and forcing Buckley to make numerous saves. Junior defender Sarah De La O was instrumental in preventing Panther chances through her aggressive covering and critical clears.

South Pas utilized the counter attack many times with defenders shuttling the ball to Segal in the midfield who then threaded it through to the sprinting junior striker Kaylee Wallace. While the squad did an excellent job moving the ball up the wings, they were still unable to land the ball in the back of the net.

South Pas’ fortunes changed when Kim dribbled around Poly midfielders and sliced the ball through the defensive line, straight into the bottom left corner. Kim’s shot, just two minutes before the final whistle, secured South Pas the win in its first preseason game.

“[Today’s game] has made me really hopeful because I didn’t know what to expect with such a new team,” Segal said. “Poly is a pretty tough opponent and we looked good tonight. I think that we can do really well in league against tougher opponents.”

The Tigers continue the preseason with a battle against Oaks Christian on the road at Westlake High School on Saturday, Dec. 7.