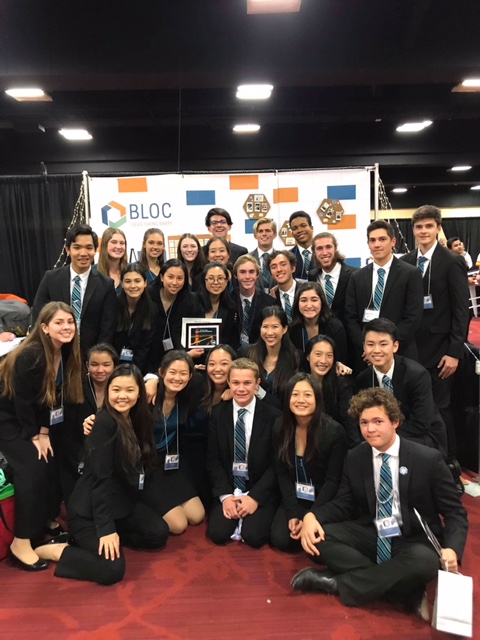 The varsity and JV teams of Virtual Business competed this past weekend in Oakland. The teams –– consisting of SPHS juniors and seniors –– exhibited their respective sections from marketing to sustainable business plan.

Varsity team Bloc along with junior varsity teams Podz and Journey competed against an estimated total of 25 teams at the event. This year, Bloc specializes in creating modular furniture from shoe-sized blocks, while Podz sell sleeping pods to enhance someone’s sleep. SPHS had approximately 50 students competing in various competitions in the trade show, which are the culminations of the earlier works in the class.

This school year, the Virtual Business teams has handled competitions and trade fairs with exceptional results.

The teams participated in numerous competitions at the event including Marketing Plan, Human Resources, Elevator Pitch, and Finance.

Sustainable Business Plan was the highlighting competition at this event. The competition challenged student companies to support themselves by creating smaller companies on a school campus to fundraise trip & trade fair expenses. Teams had to create a business plan for this topic that can be formed with a thousand dollar budget. The top eight teams with the best plans were qualified to compete in the oral presentation. Bloc placed first in this competition, garnering a thousand dollars for their win.

“[This] trade fair in Oakland was extremely successful, and an amazing learning experience for New York next month. Our next trade fair is the big one for Business Plan competitions, so we’re all setting up for that,” said Journey junior Amanda Estevez.

The Virtual Business teams will be competing in a national competition held at New York on April 14 through 19.