Trudie Strobel: A Life In Tapestry 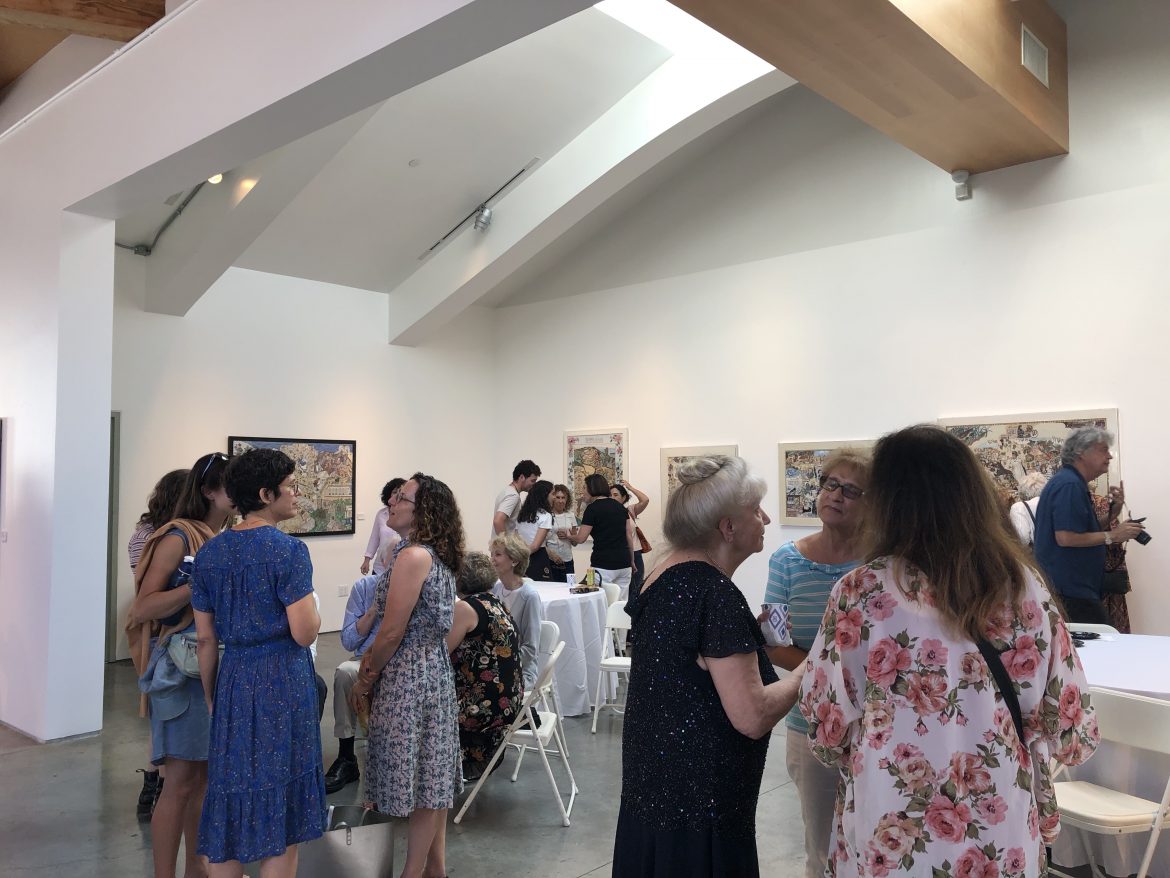 Strobel's poignant, painstakingly handmade tapestries pay an homage to those that suffered through the atrocities of the Holocaust.

Maya Savin Miller and Lila Dworsky-Hickey grew up as part of the last Jewish generation to bear witness to the stories of the people who lived through the Holocaust. Countless years of learning history had educated them with the facts, yet the raw, emotional weight of their culture remains unparalleled in the words and memories of survivors.

Together, they embarked on a journey to establish and curate an exhibit for the tapestries of Trudie Strobel, who was only four years old when the Nazis stole her and her mother from their home. After many months of preparation, Trudie Strobel: A Life in Tapestry, finally opened its doors in mid-August 2019 at the Feldman-Horn Gallery in Harvard-Westlake School.

The entrance to the exhibition room was a cacophony of chatter, with throngs of people interspersed around a cluster of tables for seating. Aesthetically accentuated by its clean architecture, the Feldman-Horn Gallery diverted all the attention to its temporary occupants. An expansive collection containing around 27 of Strobel’s framed tapestries hung on the white gallery walls.

Strobel’s work covers a variety of subjects, including portraits of influential Jewish women and a depiction of Kristallnacht. The meaningful messages of Strobel’s tapestries were inundated with the cultural heritage of the Jewish people. Through her usage of Yemenite stitches, a Jewish style of embroidery, Strobel alluded to traditions dating back to the 18th and 19th centuries.

Many of the tapestries were on loan; she had given a bulk of her work away to family and friends. Strobel’s other projects, like dolls dressed in historic costumes of the Jewish people, ended up in places like the Los Angeles Museum of the Holocaust. But her tapestries, a treasure in their own right, never reached the public’s eye.

“I’ve always thought, wouldn’t it be beautiful to see them all in one place?” she said.

Savin Miller first met Strobel during her bat mitzvah preparation through an organization called Remember Us: The Holocaust B’nai Mitzvah Project. To forge a connection with the past, Remember Us supplied the name of a child lost during the Holocaust to incoming bar and bat mitzvah teenagers, who in turn performed acts of remembrance in their memory. Savin Miller and Strobel formed a close bond after the event, building a relationship that sparked many collaborations like “Trudie’s Goose,” a short story written by Savin Miller in the perspective of Strobel during the Holocaust.

Strobel continued to tell Savin Miller the stories of her life, which ultimately developed into the roots of A Life in Tapestry. The powerful messages of Strobel’s tapestries, combined with her determination echoed in thread, held Savin Miller in thrall.

To fund her idea, Savin Miller applied to the Dragon Kim Foundation, where grants are provided through their Fellowship Program to impactful and driven student-led projects. It was a massive undertaking, and so for her idea to come into fruition, she reached out to Dworsky-Hickey as a partner.

“Her art was how she started to tell her story,” Dworsky-Hickey said. “We have that privilege and we have that responsibility to carry on these stories.”

Strobel, who had found solace in her tapestries during her darkest days decades after Holocaust, picked up the needle to sew her first creation shortly after liberation. With beads given to her by the Red Cross and the guidance of her seamstress mother, she stitched a goose, a motif that would later become a prevalent inspiration for Savin Miller’s short story.

“Trudie’s Goose” was later adapted into one of the two films premiered by the Righteous Conversations Project for the exhibit. The RC Project connects Holocaust survivors with students, with a mission that aims to continue these conversations of tolerance and remembrance through film, media, and photography.

In addition to the screening of “Trudie’s Goose,” A Life in Tapestry also showcased “Stitching a Life: The Story of Trudie Strobel.” It was the culminating work of Dworsky-Hickey and ten other student filmmakers, produced with help from the RC Project. The team dedicated time over the summer, filming Strobel and two other survivors with the intent to recreate their stories using a unique combination of animation, montage, and stop-motion cinematography.

Savin Miller and Dworsky-Hickey plan to continue A Life in Tapestry, spreading Strobel’s tapestries to the world at large. They will remain at the Feldman-Horn Gallery for a month, viewing available with appointment only by samara@remember-us.org. A possible consideration for the exhibit’s future location is The Armory Center For the Arts in Pasadena.

“I’m very humbled and pleased that so many people appreciate this work and I’m close to tears, so so happy,” Strobel says of the exhibit. “My sweet Mama, she would be so pleased and happy for me. She would be so honored to know that I did all this in my lifetime.”