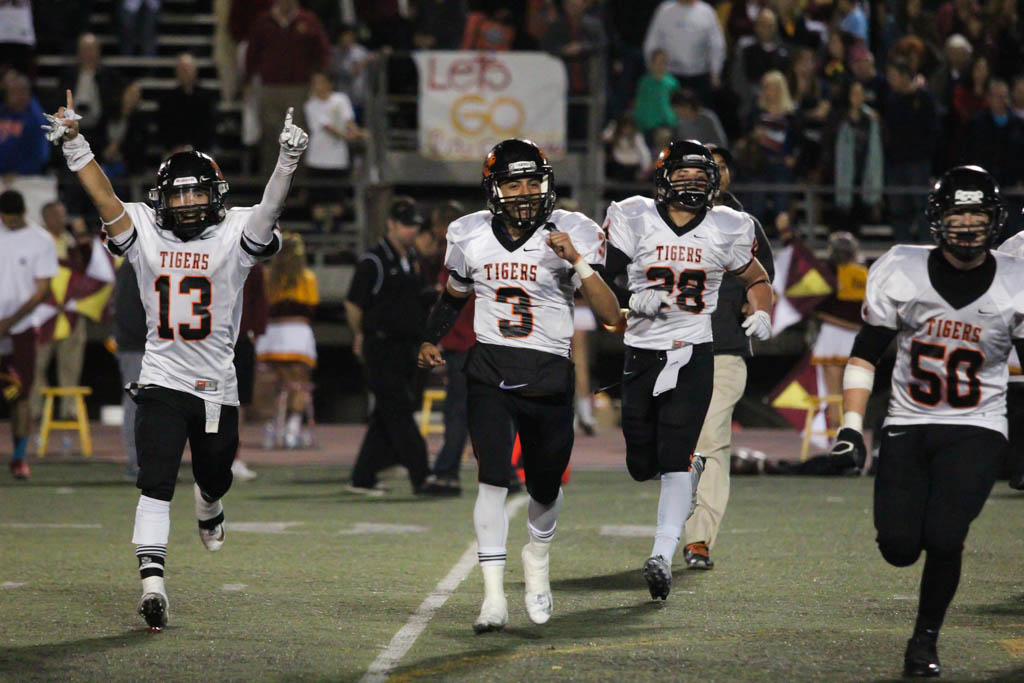 Before getting on the field tonight, the South Pasadena varsity football team knew what was on the line; a CIF Central Valley playoff bid, bragging rights, and history were all put on the line on La Cañada’s field. In fantastic fashion, the Tigers emerged victorious in their most important game of the season in a 21-3 match against the La Cañada High School Spartans. The Tigers capitalized on a solid balance of rush and pass plays for the first time this season, and the offensive and defensive units played a near-flawless game for the whole 60 minutes. Without the presence of head coach Marty Konrad, the team was lead by offensive coordinator Marc Shettleroe.

“All of our hard work has boiled down to this moment right now,” senior Kurtis Ip said. “It’s so surreal.”

Emiliano Sornoso carries the ball against the Spartan defense. He was a force for the Tigers on both sides of the ball.

The Tigers established an early run right from the start of the game. A combination of strong rushes from senior halfback Ernesto Jauregui and junior Jeremy Gabler set up a quick rush for flex option Christian Carter to score on a 38 yard run, putting the score at 7-0 only two minutes into the game. It was after a La Cañada punt that junior wide receiver Max Luck stole the show in the Tigers’ second drive, catching two screen passes for 42 yards. The 99 yard drive was topped off with an incredible pass from junior quarterback Michael Partida to a well-covered Luck in the right corner of the end zone, putting the Tigers in a 14-0 commanding lead. Gabler would make his third tackle for a loss in the recurring drive, and the first quarter would end with an interception by junior safety Emiliano Sornoso, his third in two games.

Jauregui rushes against the Spartan defense. He would gain 122 yards on 9 carries in the game.

The second quarter became a defensive showdown, as neither team was able to generate more than 40 yards on any drive. Jauregui and Partida converted on a few first down attempts, but La Cañada would stop the Tigers from reestablishing their passing game with solid man coverage defense. The Tigers’ defensive unit, comprised of seniors Jeremy Escandon, Jauregui and Ip, juniors Sornoso, Gabler, Anthony Bakhshi and Luck, and sophomore Jalen Ross, proved to be a force to be reckoned with. The Tigers headed into the locker room at halftime with the game still locked at 14-0. South Pasadena spectators and players could feel the tension in the air dissipate as a confident Tigers team rolled to the locker with confident attitudes.

“We were in a groove,” Carter said. “We weren’t out of [the game] yet, but [our first half] really got our fire burning.”

Junior Max Luck carries the ball after a catch early on in the game. He led the Tigers to their second touchdown of the night.

In the third quarter, La Cañada would finally score its first points on a 38-yard field goal to make it 14-3 with 7:14 left. Senior Tiger halfback Matthew Ayala was injured on the next drive with a sprained ankle, but is expected to be healed by Monday. After a penalty against the Tigers brought them within their own red zone, Jauregui exploded with a 64 yard run to take the Tigers within striking distance. Jauregui fumbled the ball a moment before he pushed into the endzone, and it was recovered by La Cañada’s Andrew Sarceda. The Tigers’ relentless defense would prove unstoppable again, as junior Tony Perez stopped a 4th and 1 conversion for the Spartans, forcing a turnover-on-downs and creating a chance to score as time expired in the third quarter.

La Cañada’s Anthony Connell is flipped by Jalen Ross on a pitch to the outside.

Jauregui would start the final quarter with a 22 yard rush, setting Carter up for his second rushing touchdown of the game. With the score now 21-3, La Cañada would begin taking more risks in its offensive tactics. Spartan quarterback Kevin Mcgowin would complete all of his eight passing attempts, and runningback Jace Harrick  would carry the Spartans to the Tigers’ 1 yard line. However, a huge defensive stop by Ip on the goal line spoiled the Spartans’ offensive groove.

“Everything was going through my head at that moment,” Ip said. “I would never have expected what would come next.”

In the final two minutes of the game, Ip forced a La Cañada fumble which was picked up by Escandon. The Tigers would then run out the clock to the elated cheers from the Tigers’ bench and stands, as the latter chanted “CIF”. With the win, the Tigers secured the elusive CIF playoff bid, the first football team from South Pasadena to do so since 2003.

Ip forces the crucial final fumble, ending the game with the Tigers on top 21-3.

The winner of the contest would receive the third and final playoff seed from the Rio Hondo league and would advance to the first round of playoffs. The Tigers won the contest, but post-game allegations suggested otherwise.

According to an e-mail sent by principal Janet Anderson addressed to the Tigers’ football families, South Pasadena was accused of cheating by the La Cañada football program, when the program alluded to having evidence of a South Pasadena coaching official videotaping the Spartans’ practice. Neither the players nor the rest of the South Pasadena coaching staff had any knowledge of the alleged incident prior to the contest. After further investigation, council from the Rio Hondo league confirmed South Pasadena’s disqualification from the CIF playoffs. Due to the timely nature of the upcoming game, the Tigers will definitely be erased from the playoff picture.

Allegations of a South Pasadena coach illegally filming Spartan practices surfaced on social media, but there has been no official announcement as to the cause of the disqualification.

The early end to the season couldn’t take away the accomplishments that the Tigers had made in their historic season. The Tigers finished the season with a 7-3 record overall and a 3-2 record in league after the forfeiture of the La Cañada game. While this marked the final game for the team’s seniors, the team is still confident that this season was not wasted.

“These guys are my brothers,” Partida said. “We will never forget what happened on the field tonight. We deserve to go to CIF.”

The team will miss the senior leadership from both sides of the field, but the team humbly looks towards next season with a burning vengeance in each of the players’ minds.

For developing information on the allegations pertaining to the disqualification, stay posted with Tiger Newspaper via Facebook, Twitter, and tigernewspaper.com

Jauregui rushes the ball against the Spartan defense.

Water polo closes out season with loss to Mira Costa

Opinions on the best and worst athletic...