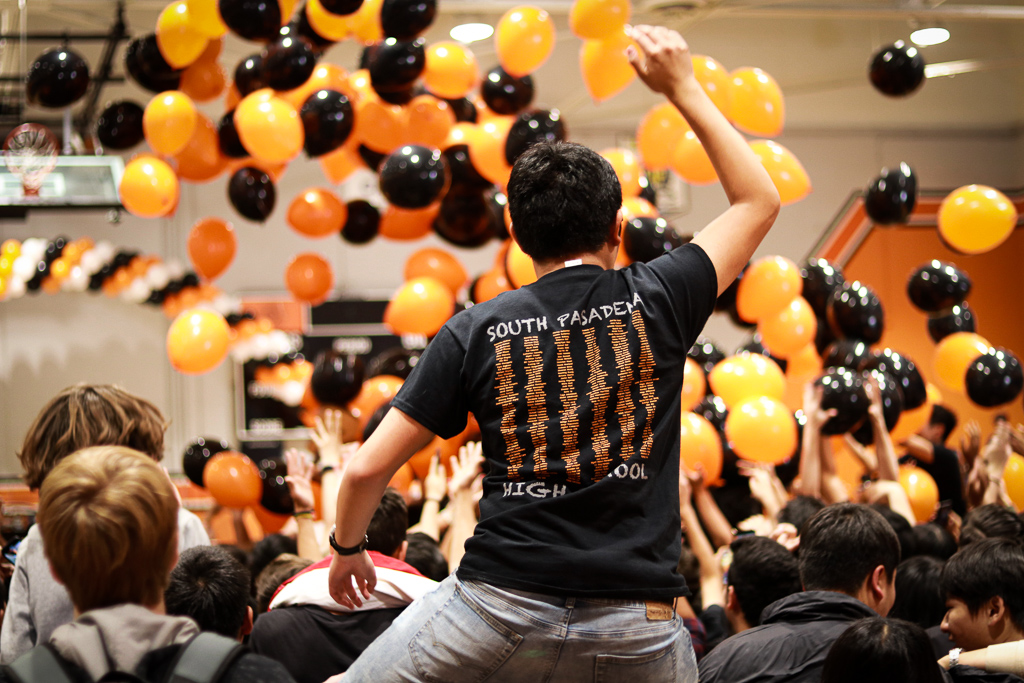 Seniors ended the assembly with tradition, bouncing around orange and black balloons in celebration.

South Pasadena High School students and staff convened in the gym to celebrate the conclusion of the school year with the 2018-2019 Farewell Assembly on Thursday, May 30.

Commissioner of Assemblies senior Flannery Clark began the assembly with a hearty welcome to the student body before the senior class burst through the gym entrance. Various groups gave performances throughout the duration of the assembly, including final acts from pep and dance. The performing graduating seniors in each group were celebrated for their accomplishments and guidance throughout their time at SPHS.

Student bands rounded out the performances with both original songs and heartfelt renditions of classics. The new group “Finger Donut” debuted with its original song, “Boss,” and returners led the student body in singing “We are Young” by Janelle Monáe. The seniors also performed a comical group dance to the song “Body Rolls” in green suits.

The counselors awarded their annual book awards for juniors among the top ten percent of the school’s academic performers, recognizing devotion to community influence and academic well-roundedness. Commissioner of Clubs senior Sage Pierone also distributed two awards to the Feel Full Club and the Urban Sustainability Club for their contributions to the school community and environment on campus.

The assembly concluded with the appointment of the 2019-2020 commissioners to the tune of “Take Me Home, Country Road” by John Denver. Newly inaugurated Commissioner of Assemblies junior Evan Kowal ended the celebration with a heartfelt message to the graduating senior class.

The freshman and sophomore class ASB officers treated the seniors during an announcement of the Last Chance Dance, awarding the class free tickets to the event for accumulating the most spirit points in their classes throughout the school year.

ASB also announced the theme of the Last Chance Dance as “Light Up the Night,” which will take place Friday, May 31.