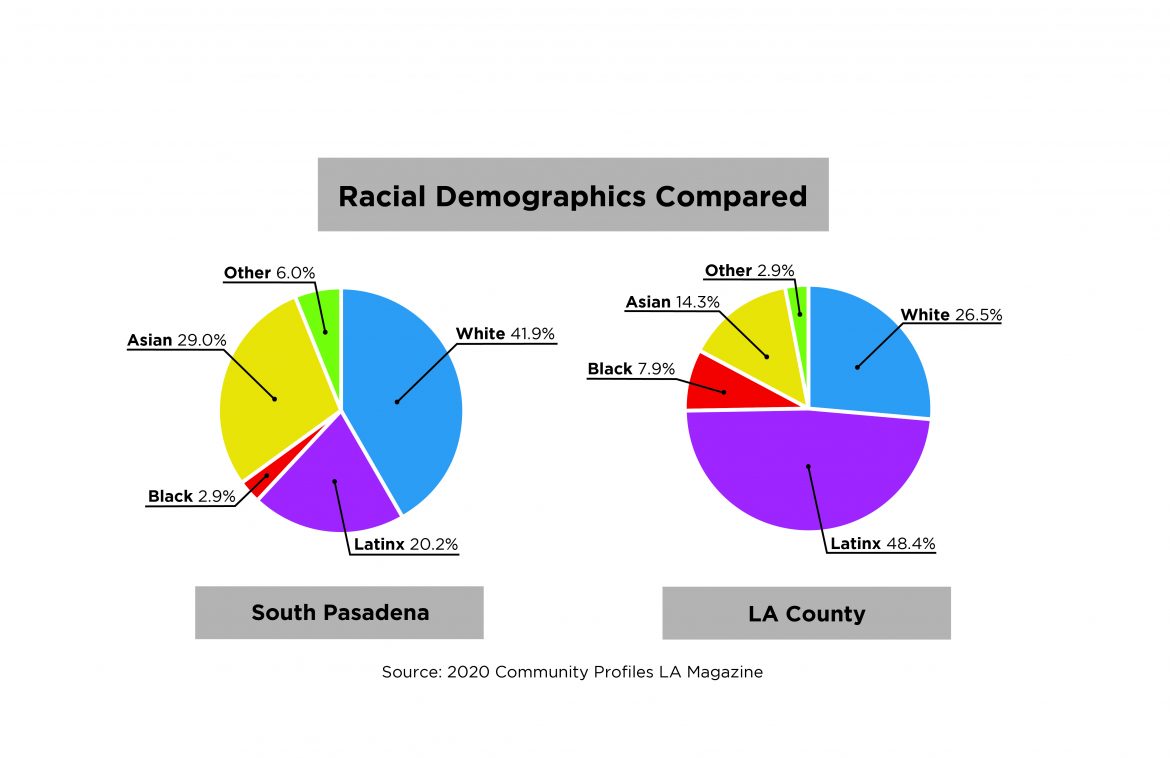 South Pasadena's Latinx and Black population percentages are less than half of L.A. County's, which calls the town's self-prescribed diversity into question.

South Pasadena’s restrictive covenants ensured that the community remained largely racially homogeneous for 75 years. It was not until the mid-1960s when the federal government funded the Altos de Monterey development — mandating that there be no discrimination on who could purchase property — that significant numbers of families of color began moving into town.

The city’s Community Redevelopment Agency coordinated the lot auctions to prospective residents, although existing community members were reported to have organized efforts to outbid Asians. Despite these exclusion efforts, many Asian, some Latinx, and a few Black families did move into the hilly area and attend the newly built Monterey Hills Elementary School.

This first influx of non-white residents did not, however, significantly change the extremely conservative and racist views the town held. Many South Pasadena parents belonged to the John Birch Society, an anti-Communist group notable for its opposition to the Civil Rights Act of 1964, whose western headquarters were located on Mission Street in San Marino.

Jane Crosby, a prominent leader in the John Birch Society, opened the Americanism Center on the corner of Mission and Fair Oaks in 1961. It was fashioned as a patriotic bookstore but essentially served as a conservative meeting place and a hub for anti-Communist ideals, which were often used as a guise to oppose any efforts to fight for racial equality or civil rights.

These clubs controlled the local political scene for much of the Cold War era. South Pasadena participated in the radically conservative “Patriotic Letter Writers” campaign and the Chamber of Commerce also hosted a series of “Freedom vs. Communism” discussions in the early 1960s. The city council even passed Resolution 4344 on Feb. 23, 1961, “imploring Americans to awaken and fight all communistic activities.”

“Oftentimes, if you spoke up about anything like civil rights or anti-war issues or whatever, there would be all these kids who would be telling you you were like a ‘commie’ or something. It was really kind of disturbing,” Lorraine Gutierrez said. “[South Pasadena was] very, very conservative, and conservative I’m sure extended to race…  [The John Birch Society and the FBI] thought King was a communist. When there was any kind of riot or protest [for civil rights]… [the news programs] would be saying, ‘Well, it’s these outside agitators, these Communists who are causing it… they don’t belong. Why don’t you just move back. My country love it or leave it’ kind of thing. It was really, very intolerant.”

South Pasadena’s transition from staunchly conservative to predominantly democratic occurred in the late 1980s to the early 2000s as highly-educated professionals who worked in downtown L.A. began moving into the city, replacing the previous white, working-class demographics. Although the city grew more racially diverse and progressive with the new residents, it also became more economically exclusive and housing prices skyrocketed.

This prevented, and continues to prohibit, middle-class and lower-income families of color — who are mainly Black and Latinx — from moving into the community. Today, almost three quarters of the city population is white and Asian, and the local tenant community faces numerous struggles with rising rents and the threat of evictions. Without an assertive push for affordable housing in a time when real estate prices continue to rise, South Pasadena is projected to grow even more exclusive and less diverse.

Even when South Pasadena’s demographics did diversify racially, city leadership did not reflect that. Up until 1988, every single council member was white. Evelyn Fierro, a Latinx resident, was the first person of color elected to the city council and the first to become mayor in 1992. Currently, there are two people of color on the city council: Mayor Bob Joe, who is Chinese, and council member Diana Mahmud who is of Lebanese and Mexican descent.

South Pasadena’s largest racial group by over 10 percent is white, yet the city often fixates on being a very inclusive, multicultural community.

“I feel as if… South Pasadena likes to pride itself in the idea that… SPUSD [is very diverse] when that’s simply not the case,” senior Jayden Eden said. “The current system in place with high housing/renting costs with no rent control, guaranteed admission [to SPUSD schools] for living within the South Pasadena zip code and enforcing residency verification checks as a scare tactic, isn’t built to support most low income African American and Latinx people wanting a better education for their children.”

Cloaking South Pasadena’s legacy of racism in an inaccurate mirage of diversity disregards the very real experiences residents of color have of not feeling accepted.

“I would and still feel insecure when I’m hanging out in a mostly white group of friends, or walk past a mostly white group of people,” junior Maya Turun said. “The group of people could be the nicest people in the entire world, but based off of past experiences in which someone was very racist towards me, it has now become an instinct to always be attentive, careful, to always keep a lookout. It even scares me that I feel this way in a community like this.”

Focusing the conversation on how diverse or inclusive South Pasadena has become not only suppresses many community members’ accounts, but prohibits productive discussions on how the town can grow more equitable and accepting. Residents, especially those who are white, need to escape their self-congratulating perspective by learning about their town’s history of racism and its significance today.