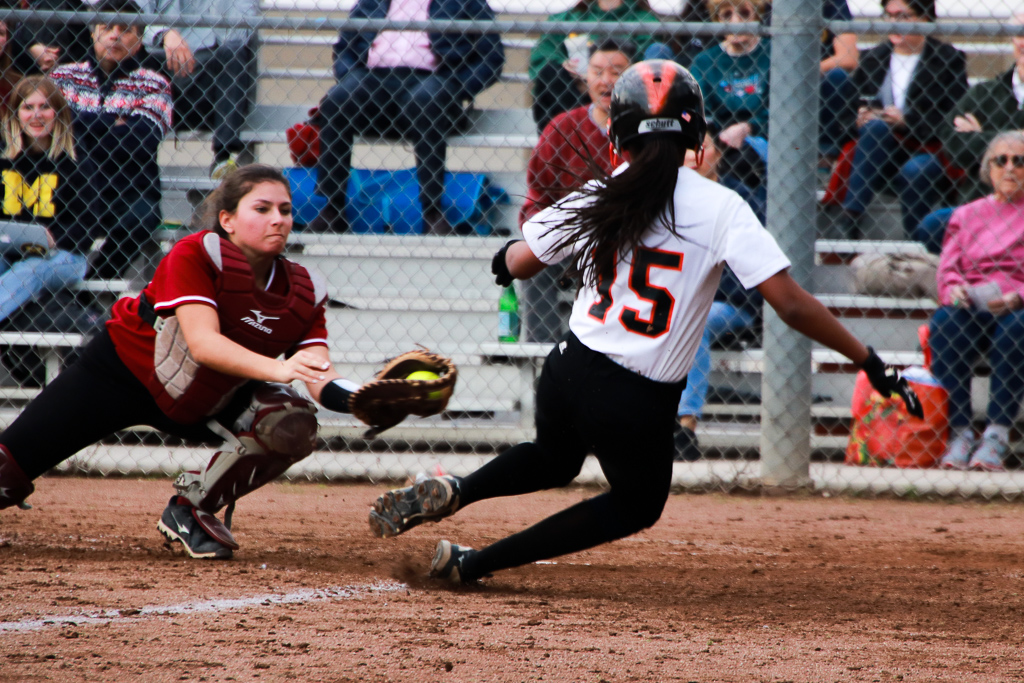 A Tiger baserunner gets thrown out at the plate in the 9-0 loss.

South Pasadena softball suffered a tough 9-0 loss to rival La Cañada on Tuesday, March 5. The Tigers came off a tough loss in their league opener against Monrovia last Friday, and failed to rebound against the Spartans in the second game of the season.

The Tigers started off slow, allowing the Spartans to score three in the first inning. The Tigers were unable to recover from the early outburst, as they trailed for the remainder of the game.

South Pasadena struggled to push runs across due to La Cañada’s steady pitching and solid fielding. However, for much of the game, they didn’t make it easy for the Spartans to score either. Sharp fielding, like sophomore Carissa Park’s impressive hard line drive catch at third base, kept the Spartans working hard for every run. However, the Spartans were still able to score another three runs in the fourth, doubling their lead.

At the top of the fifth, sophomore Camryn Pearson took the mound and pitched well for the Tigers. Despite good pitching, the Tigers were unable to cut down the lead due to poor hitting. In the bottom of the sixth, the Tigers were down by six, and there was much needed scoring for the bottom of the inning. Pressure was on for sophomore Kate Buckley, as she was up to bat and there were only five outs left in the game. She was able to walk to first, but SPHS did not advance. The Tigers finished the sixth inning 6-0, with the Spartans in the lead. The seventh inning didn’t show much promise either, as La Cañada continued to score two more runs during the top of the inning. A throw out at home concluded the Spartan blowout.

South Pasadena softball will search for their first league win at their away game against Temple City on Tuesday, March 12.

Swimming faces off against Mark Keppel in home meet