Santa should have no place in public education 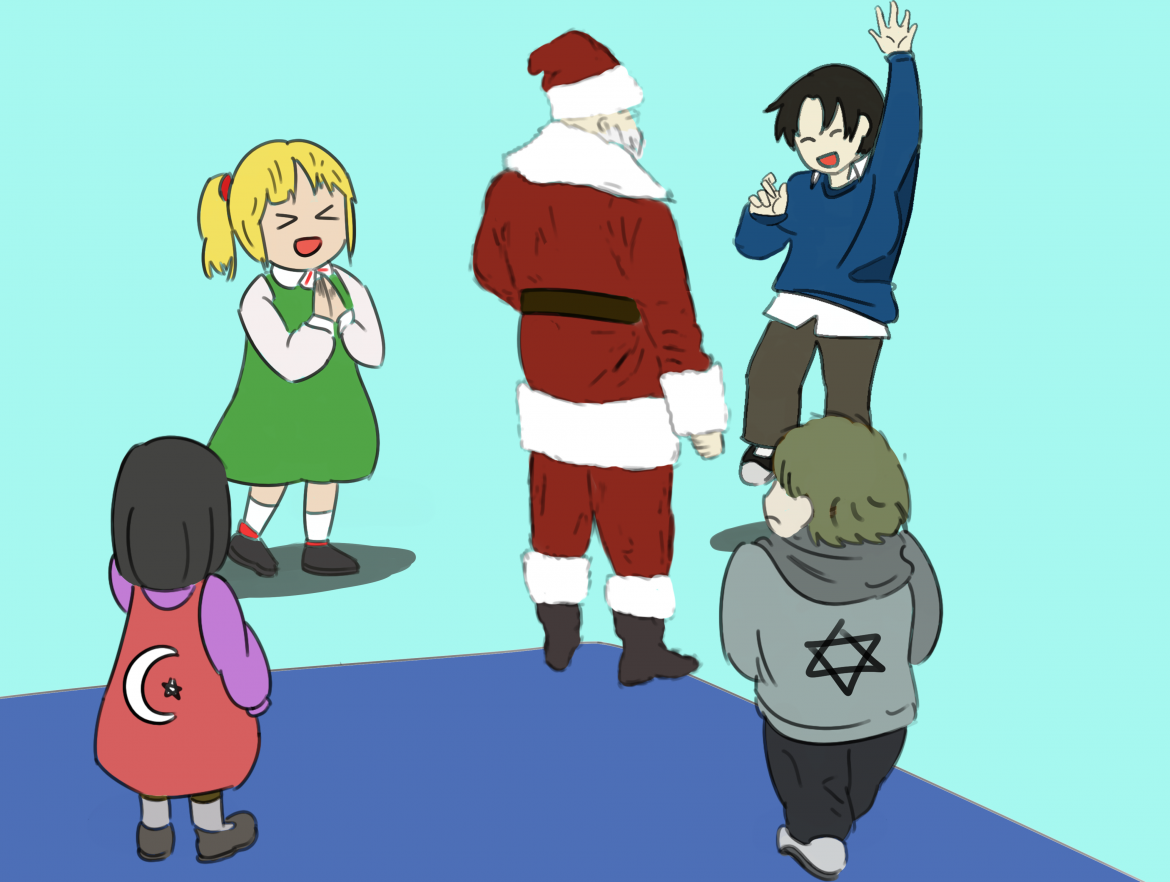 With the holiday season upon us, it’s important for teachers to remember to embrace religious diversity and avoid celebrating religiously affiliated holidays within the classroom.

Throughout elementary school, I distinctly remember participating in a fair share of Christmas-themed school activities. From writing wish lists for Santa to reading books centered around the North Pole, my small Pennsylvania elementary school heavily integrated Christmas celebration into its curriculum. I am only half Jewish and do culturally celebrate Christmas, yet activities surrounding it still made me uncomfortable. I was not left out from the fun, but whenever my teachers mentioned Santa or anything of Christmas nature I still felt different from my peers because I celebrated Hanukkah. While bringing Christmas to the classroom may be enjoyable for children who celebrate the holiday, it leaves youth from other religious groups marginalized. Religiously affiliated holiday celebrations should be omitted from public classrooms and replaced with more inclusive celebrations of the winter season.

Schools should never alienate children from class activities purely because they are members of minority religious groups. Classrooms should be safe spaces for children rather than places where they are singled out. Additionally, Christmas celebration within schools reinforces the neglect that non-Christian children are already subject to during the holiday season in never being given representation in holiday advertising. From the opposing point of view, some argue that Santa became popular through Coca Cola ads and is not entirely religiously affiliated. However, he is still exclusively associated with Christmas and Christianity. Jewish, Muslim and Buddhist children would definitely feel excluded if a teacher ran a Santa Claus activity in class.

Additionally, the public school calendar is already designed for the Christian student. The two week “Winter” break in late December centers on Christmas. Yet during Hanukkah and Kwanzaa, school is often still in session and many celebrating children are forced to do homework rather than spend valuable holiday time with their families. Unfortunately, there is not much that can be changed when it comes to the time allocated for holiday breaks. Nevertheless, the public education system should at least be making an attempt to avoid any additional negligence and encourage inclusivity when it comes to holiday celebration inside the classroom.

Many argue that this problem of exclusion could be solved by celebrating Hanukkah and Kwanzaa at school, in an attempt to ensure all children feel represented. While this would be well intended, it could be offensive for a Christian teacher to attempt to celebrate a cultural holiday in class that they did not understand. Inclusion is always positive, but misrepresentation is problematic.

“In kindergarten, my teacher said she was going to bring in potato latkes and she brought in hash browns. I tried to explain to her that potato latkes are always homemade and very different from hash browns, and she totally ignored me,” junior Ruby Sortino said. “She wasn’t Jewish and changed a traditional food that we eat during the holidays to something that people eat for breakfast.”

The simple solution for an all-inclusive public school holiday season would be to make all religiously affiliated season celebrations more general. Instead of Christmas Decorations in schools, Winter decorations. Instead of Christmas break, Winter break. Instead of Secret Santa, White Elephant. It is the responsibility of public schools to promote diversity and ensure the environment created is fully inclusive. Eliminating religious holidays from class curriculum is just one simple way this can be done.