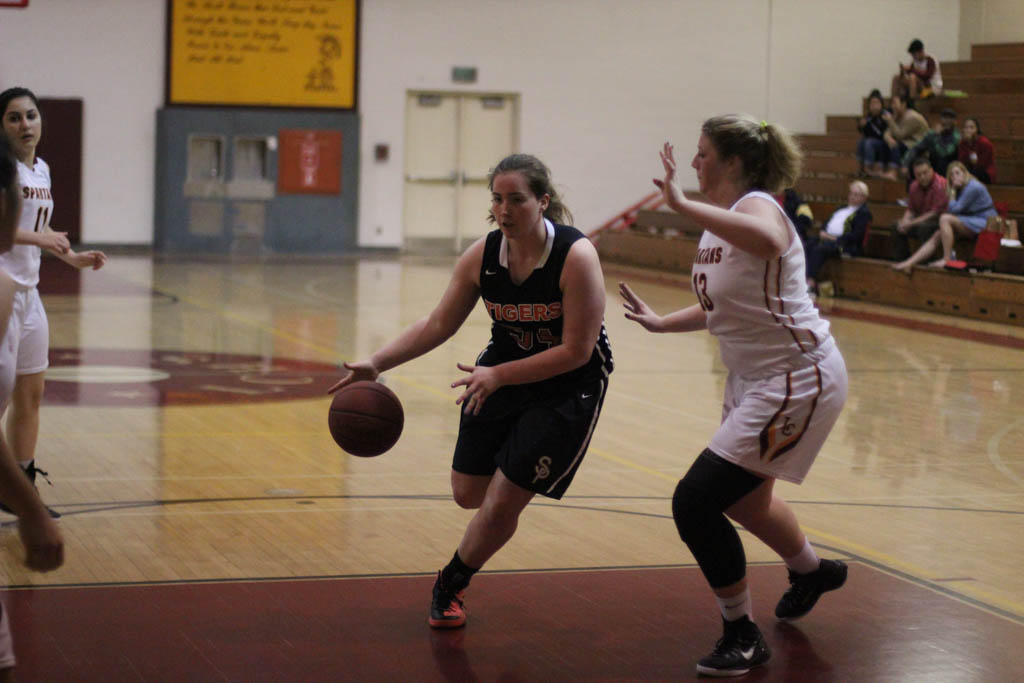 In one of its most exciting games of the year, the Girl’s basketball team managed to secure a 60-55 overtime win versus La Cañada High School. This game was much closer than its previous meeting with the Spartans, which ended in a lopsided 77-38 win.

The Spartans got out quick, taking an early 4-0 lead when senior Elise Takahama sunk in a three pointer for the Tigers. However, this would be the their only points of the quarter as La Cañada stepped up its defense, along with several missed shots by South Pas. At the end of quarter one, the Tigers were down 13-3.

South Pasadena still had a hard time finding the hoop in the second quarter, but this was broken by a three sunk by Takahama, followed by two more points from junior Kristin Kafkaloff. Both teams were playing very physically and at the end of the half, South Pasadena was trailing 25-15.

“We made this game a lot tougher than it needed to be. Senior Sophia Hathaway said. “One of the reasons it was so close is because we didn’t come out with as much intensity as we did in the first game.”

The Tigers came into the second half in their usual style, with more intensity and prowess than in the first. Senior Lexie Scholtz started off the third quarter with three points from downtown, followed by another three from Takahama a few possessions later. Takahama and Scholtz each sunk two more threes, totaling six three pointers split between them in the quarter. With one quarter left in regular play, the game was tied up 35-35.

La Cañada started off the last quarter gaining a four point lead when Takahama responded back with a two point floater. However, the Spartans quickly followed with two points of their own. South Pasadena would not give up as Hathaway and Scholtz each scored two points to tie the game up once again. Scholtz then hit a three, causing the Tiger crowd to erupt in cheers. However, the Spartans were determined not to be beaten on their home court, and cut South Pasadena’s lead to one point. Kafkaloff hit a free throw to increase the lead to two, but a two point shot by La Cañada with five seconds left forced the game into overtime.

Both teams went back fourth in overtime, with neither side taking a significant lead. However, with the score tied at 55-55 and 10 seconds left in the game, Kafkaloff made a crucial layup and a free throw to give South Pasadena a 58-55 lead. She then scored two more points on free throws with 1.1 seconds left, solidifying the Tigers 60-55 win.

“Our shot was also really off and that added to our slow start,” Hathaway added. “And as much as this shouldn’t have a factor, the reffing was not as fair as we would have liked it to be. Multiple people on our team were in foul trouble and with a roster of eight that makes things a bit difficult.”

This win improves South Pasadena’s league record and 7-0 and puts them in good position to win the Rio Hondo League title for the first time since 1996. They face off against Temple City next on February 6 at 5:15 p.m.