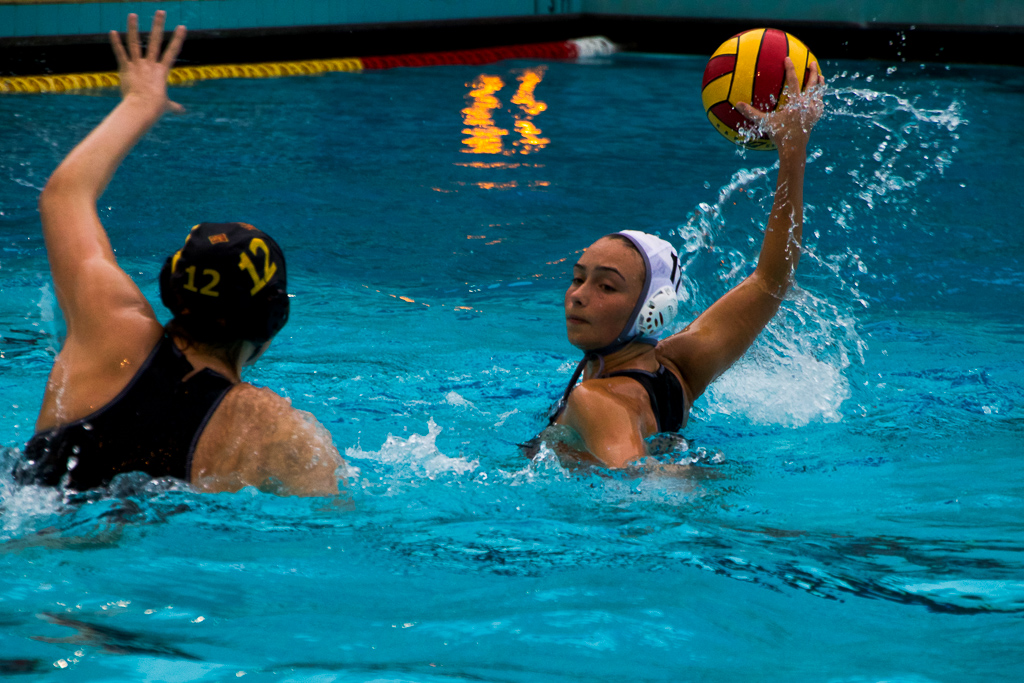 Senior Jael Osborne provided a spark for the South Pas offense, but the Tigers ultimately fell to the Spartans.

Girls’ water polo fought with perseverance in its league opener at La but was defeated by a score of 15-5. Due to the Spartans’ overpowering offense and defense, the Tigers faltered against strong plays and had little opportunity to score. With this defeat, their league opener places the season record at 2-4.

From the start, the game proved to be a nail-biter. At the first whistle, the Tigers’ confidence wavered as the Spartans pushed through the Tigers’ defense and scored in the first 30 seconds. However, regaining control, South Pas was unfazed by this early scoring and took the turnover as an opportunity to tie the game. Senior Alison Lao was both a defensive and offensive force, providing much needed shot blocks throughout the quarter; Lao shot the ball in the top left of the cage, boosting the Tigers to a small lead. The Spartans soon tied the Tigers once again. Unfortunately, with only two seconds left and more than halfway down the pool, a La Cañada player thrusted the ball down the pool and scored, ending the first quarter at a close 3-2 score.

La Cañada’s lead only grew in the second quarter, as South Pas was unable to score. The Tigers struggled to gain possession of the ball in the sprint and the Spartans instantly acted on the possession, scoring in the bottom left of the goal. Sophomore Amanda Kanaly and senior Jael Osborne kept the opposition on their toes when on offense, passing to one another to remove unwanted defenders. But, despite opportunities to score, the shots either were blocked or thrown at the rim of the cage. The second quarter ended with a bleak score of 8-2.

The second half of the game began with another lost lead in the sprint, with Kanaly barely in reach of the ball. Despite this setback, Osborne was quick to steal the ball and recuperate their teamwork with consistent passings. With a few seconds left, Osborne positioned herself to score but barely missed her shot as the clock ran out.

As the game continued on, the girls found themselves losing energy, faltering in offense and defense. Junior goalie Krystal Lee found difficulty blocking most of La Cañada’s aggressive shots, as the ball would graze the tip of her fingers. However, after strategizing with their coach, the girls found a spark of motivation and pushed harder than ever. Osborne displayed her determination, pressing against the opposition and finally scoring. Lee focused on the ball, blocking several of La Cañada’s shots. Senior Olivia Hunt skillfully aided Lee in defense and stole the ball, resulting in a turnover as the rain began pouring. With 18 seconds left on the clock, the girls rushed to the other side of the pool and continuously passed the ball until Osborne was in better position of scoring. Unfortunately, she barely missed the shot off the rim and the third quarter resulted with a score of 12-3, with La Cañada in the lead.

The fourth quarter began with Kanaly dashing across the pool to secure first possession, but La Cañada was quick to snatch the ball. The Spartans were unable to score as junior Kili Dickinson and Lao pressed against their players, preventing multiple passes. Senior Sydney Shettleroe and Hunt showcased their skills as both scored well-executed shots. However, the Spartans made sure to cut the Tigers’ opportunity to score and reinforced their defense. Continuously stealing and blocking the ball, La Cañada forced many turnovers and gained another point. With a few seconds left and the Tigers drained of energy, South Pas attempted to defend the goalie but were unable to block La Canada’s last aggressive shot. The Tigers were defeated by a score of 15-5.

After starting league with a disappointing loss, the girls are determined to get back on track and aim for a big win. Their second league game will be at home on Thursday, January 15 against San Marino.