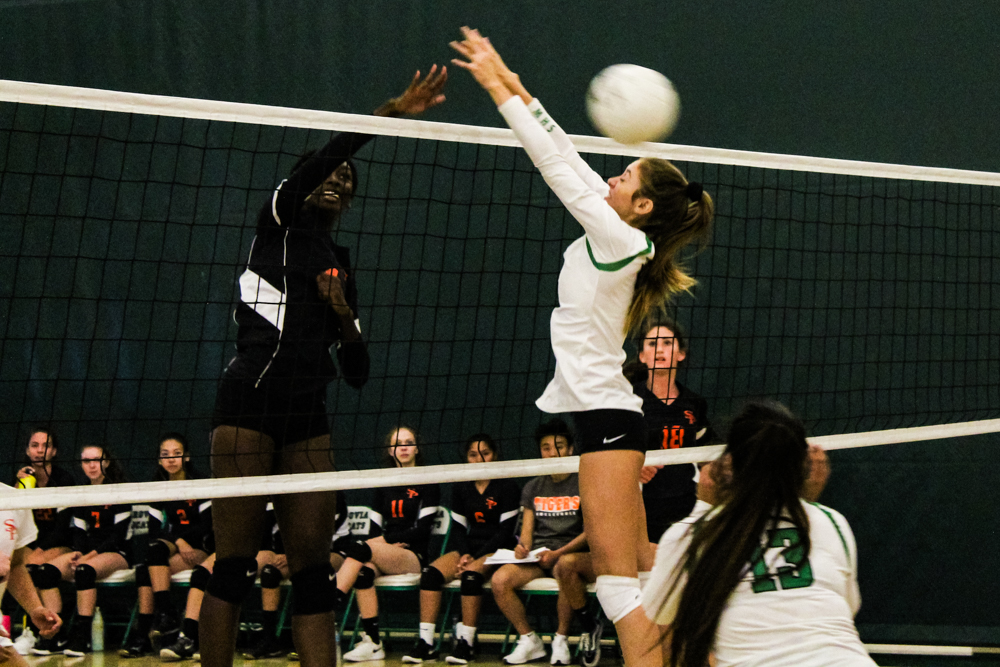 Senior Christina Taylor spikes the ball past the Monrovia blocker.

Girls’ volleyball lost in five sets in an away game against Monrovia High School on Tuesday, September 11. The game was a tough loss for the Tigers, who were playing in their first league match of the season against the Wildcats.

The Tigers and the Wildcats started off the game neck and neck, struggling to one up the opposing team. Monrovia surpassed South Pas, leaving the Tigers five points behind. However, with assistance from several key blocks by senior Kimberly Brown and impressive kills by sophomore Lola Foord, the Tigers caught up with the Wildcats to tie the game at 22. Although SPHS was able to catch up, Monrovia ultimately won the set 25-22.

SPHS started off strong in the second set, securing the first point by way of senior Christina Taylor and freshman Abby Garner’s block. The Tigers continued to stay in the lead until the Wildcats surpassed their score. The rest of the set continued to stay close, with South Pas up by just two. It looked probable that the Tigers would win the set, but the Wildcats took the lead late and won the set by two points.

South Pas gave it their all for the third set, fearing that it might be the final one. The Tigers got the lead early and stayed ahead for the rest of the game. Sophomore Lexi Schroeder set the ball to Foord who slammed it over, securing a resounding point for SPHS. The Tigers won the third set, 25-20.

In the fourth set, the Tigers dominated Monrovia, easily winning the set. Foord started off the set with a hard-hitting spike that got the crowd going. From there, sophomore libero Lindsey Hirano saved several of Monrovia’s hits. Closing off the set, Foord scored the last points for SPHS, winning the set 25-15.

In the fifth and final set, all hopes were on a victory for the Tigers. Garner scored the first point for SPHS and continued to score throughout the set. However, due to several misses on the Tigers’ part, the Wildcats pulled through and won the set 15-13.

The Tigers are playing their second league game at home against La Canada this Thursday, September 13, at 3:30.