Top Posts
Teachers voice concern over adopted learning models
Community may get a chance to vote on...
SPUSD outlines plans for distance learning during the...
Anti-Zionism cannot be equated with anti-Semitism
Anything goes?
L.A. complies with statewide protections and improvements for...
LARPing: an activity to experience the game beyond...
Residents voice encounters with the SPPD at virtual...
Why affirmative action is necessary
CIF announces athletic calendar for 2020-2021 school year
Home Featured Girls’ volleyball triumphs over Poly in first round of CIF
FeaturedGirls VolleyballSportsWeb Exclusive

Girls’ volleyball triumphs over Poly in first round of CIF 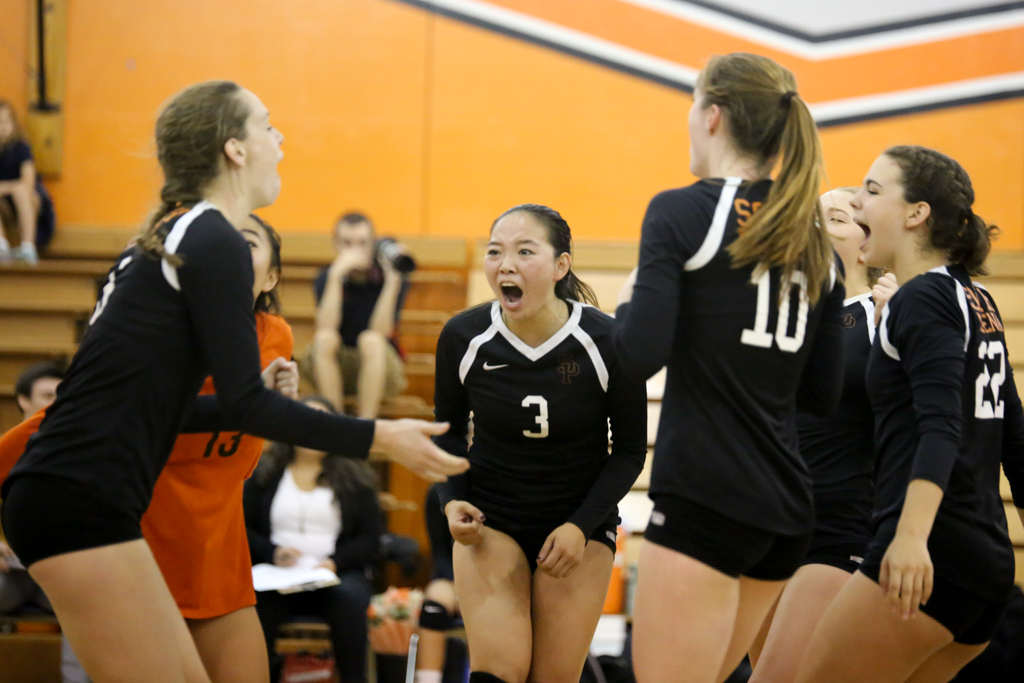 After losing to Poly in preseason, the girls’ volleyball team redeemed itself by defeating the Panthers at home in the first round of CIF. The Tigers came out victorious over Poly in four sets, losing the first narrowly at 23-25 and winning the next three 25-17, 25-23, and 25-18. Despite a rough patch during the first set, South Pas managed to take advantage of the shift in momentum and carry itself to the next round. The return of senior Kate Kutzer as a hitter tremendously helped the Tigers, because though she had been back from an injury, Kutzer had not been playing front row in order to properly heal.

“[Kate] made a huge difference, and we’re glad to have her back,” senior Molly Feldmeth said.

Senior Madison Hirano receives a serve from the oppostition.

Poly opened the first set with a commanding lead, earning three points off of two kills and an ace before senior Kutzer responded with a kill. However, the Panthers soon earned the point back and remained leading for the rest of the set. South Pas would manage to get within a point of tying several times, but was unable to score another point to reach the tie. Feldmeth displayed many powerful hits, converting many into kills. On the defensive end, the Tigers struggled to find their footing at times. Feldmeth and Kutzer garnered a majority of South Pas’ points, though junior Maddie Saito and sophomore Kimi Brown were able to earn a couple kills of their own. Saito earned the Tigers’ final point of the set before an awry South Pas serve gave the Panthers the final point to end the set at 23-25.

In the second set, the Tigers were the ones to jump to a commanding lead, scoring six points before Poly was able to put one on the board. Numerous errors from the Panthers, a Feldmeth ace, and a South Pas block allowed the Tigers to take such a strong lead. South Pas’ points steadily climbed due to kills and blocks, mostly from Feldmeth and Kutzer, although junior Harper Fox also managed to send spikes into holes in Poly’s defense. Though the Tigers consistently exerted dominance over the Panthers, Poly was occasionally able to strike back with kills and by taking advantage of South Pas’ mistakes. Defensively, senior Maddy Hirano played solidly, letting few Panther hits slip past her. A Kutzer ace concluded the second set at 25-17 after a Poly player tipped the ball out of bounds.

Senior Molly Feldmeth passes the ball to the setter.

The Panthers, determined not to falter again, immediately came out with a three point lead. The Tigers earned their first point off a block, and Kutzer followed with two kills after two Poly points. Feldmeth followed a Panther kill with a strategic set over the net to put the score at 5-7, and eventually the two tied at 8-8. Despite the tie, the visitors moved ahead and South Pas trailed Poly for a majority of the set by a close margin. Feldmeth had a majority of South Pas’ kills, and Hirano was the backbone of the Tiger defense. Saito also made some saves and had several hits. A Kutzer kill brought South Pas within one point of the Panthers at 21-22, and a Poly hit out tied the match. After a lengthy rally, Poly attempted to respond to a Kutzer spike, but ultimately ended up hitting the ball into the net. However, the Panthers fought to tie at 23-23 with a kill. Another Poly kill would have given the Panthers the advantage, but the visiting hitter had grazed the net, resulting in the point going to South Pas. A Poly hit out narrowly finished the third set at 25-23.

Feldmeth opened the fourth set with an ace, and she soon followed with two consecutive kills after an impressive diving save from Brown. South Pas commanded the final set, sending spikes deep into the Panther defense and winning most of the rallies. Feldmeth and Kutzer continued to provide the bulk of the Tigers’ points, and other Tigers such as Fox and Saito sent several hits into Poly’s court, though most were picked up by the Panthers. Towards the end of the set, Poly attempted to stage a comeback, but was ultimately unsuccessful. The Panthers fought, blocking several South Pas hits during a rally before Kutzer concluded it with a kill. Once the Tigers reached 24 points, however, the visitors were only able to score two more points before a Poly serve into the net allowed South Pas to take the win at 25-18.

Senior Molly Feldmeth sets the ball for a spike.

“It feels so great to get past the first round for the fourth year in a row,” Feldmeth said. “We’ve all grown as a team and we’ve discovered our strengths and weaknesses. We used our strengths to our advantage this time [playing Poly].”

The Tigers face the number one seed Sage Hill on the road on Thursday, November 3 in the second round of CIF. South Pas expects to put up a fight to remain in contention for a CIF championship.

Finish Ticket returns to LA at the El Rey