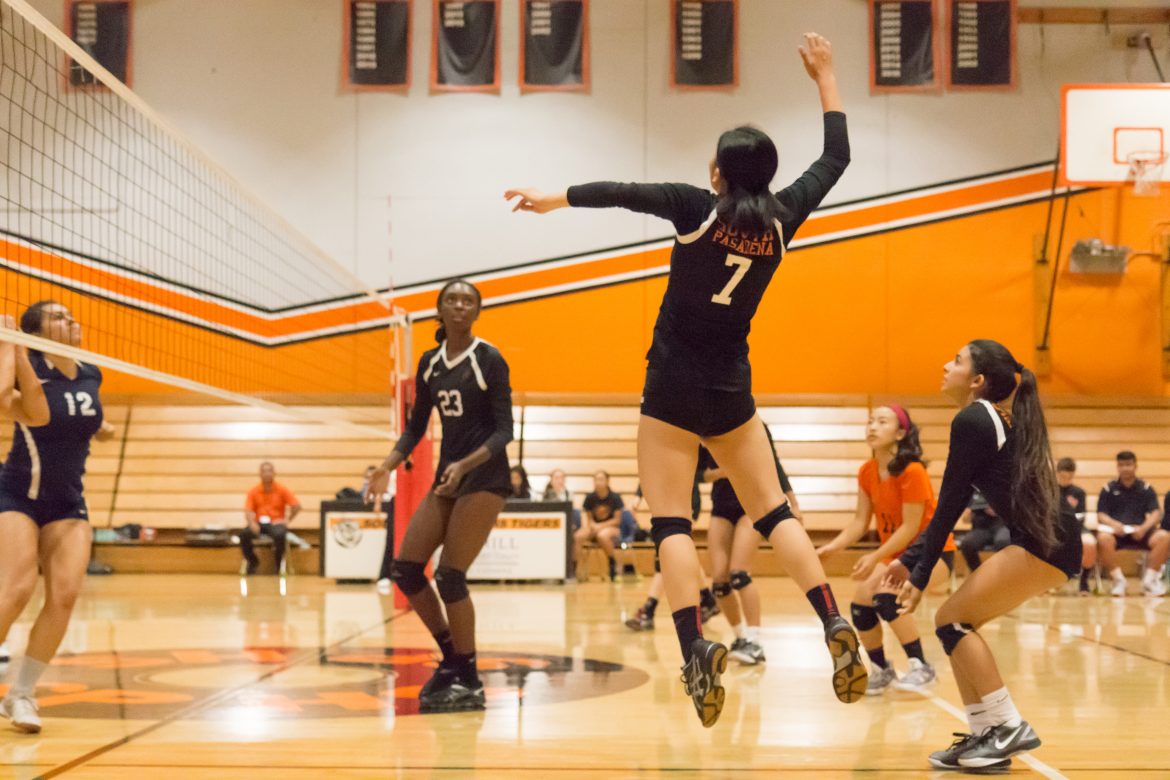 Girls’ volleyball improved its record to 2-1 after defeating Alhambra this Friday, September 8. The victory came in three sets with scores of 25-13, 25-23, and 25-22. South Pas utilized strong offense and crippled the Moor’s communication with powerful hitting.

The first set began with an error from Alhambra, followed by a foot fault from South Pasadena. The Tigers gained momentum after a kill from freshman Catherine Florence. Missed serves and uncontrolled passes from Alhambra gave the Tigers a large lead over their opponent. The Tigers struggled to communicate in the following plays, giving the Moors an opportunity to lower the deficit. Alhambra nearly tied the score at 8-7, but the defensive effort by freshman Lindsey Hirano and senior Viviana Maradiaga helped the team to establish another lead at 12-8. Powerful serves from junior Kimberly Brown forced the Moors to shank balls, subsequently giving South Pas chances to utilize their hitters. Florence and senior Isabel Bluml pushed the Tigers to a victory with aggressive offense, the set ending with a score of 25-13.

Senior Lily Turnerkipke sets the ball for a teammate.

Junior Madison Abundo opened the second set with two aces, initiating an early lead for South Pas. The Tigers immediately established powerful offense from Bluml and junior Christina Taylor. The Tigers, still in the lead, began to make frustrating errors. Alhambra seized this opportunity and tied the score at 10-10.

The score rose steadily with back and forth points between the schools. South Pasadena was unable to control the lead until late in the game when the score was brought to 22-22. The game finally ended, however, with a forceful kill from freshman Lola Foord.

The third set started well for the Tigers with strong serves from junior Natalie Deng and calculated offense from Foord. South Pasadena continued to present good front row play. Kills and blocks from Taylor kept the Moor’s from gaining points in the game. Utilizing South Pas errors, the Moors made several blocks over the Tiger’s hitters. Florence made a kill leading the score to 22-18. Effective ball movement from South Pas brought the Tigers to victory at 25-22.

“We are still new to each other and working out the kinks,” Hirano said, “I know we have the potential to be something great.”

The Tigers will play La Salle away at 6:00 PM on September 9.