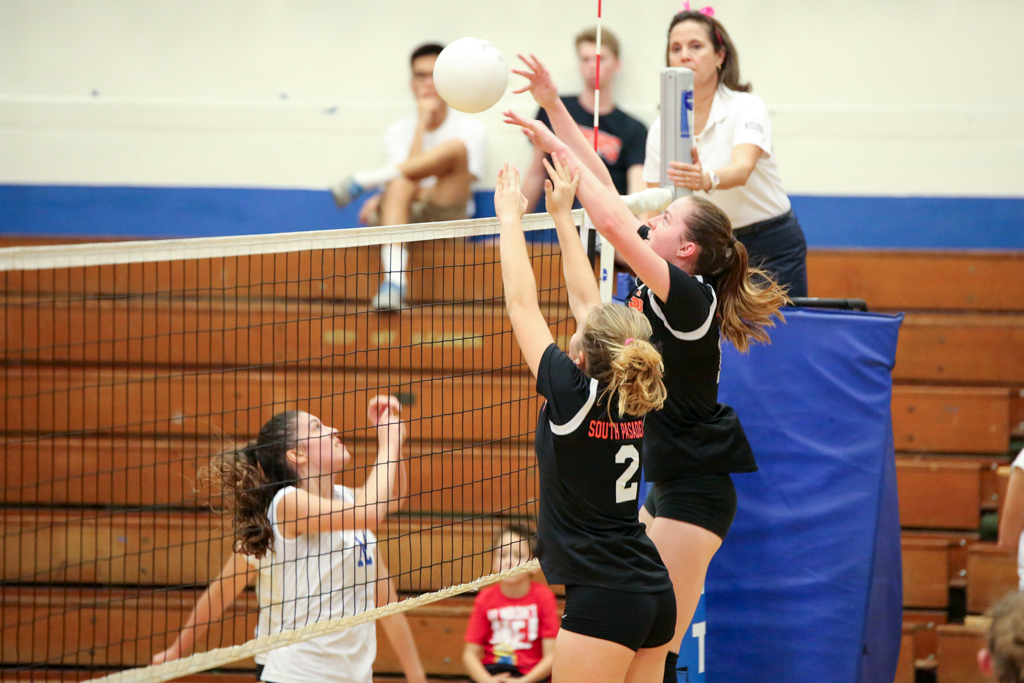 The girls’ volleyball team brought its undefeated streak to an end, falling to the rival Titans at San Marino 1-3 with scores of 26-28, 25-22, 22-25, and 23-25 on Thursday, October 22. The Tigers record now stands at 6-1 in league and 17-3 overall. San Marino had a home court advantage, with rowdy fans spurring them on, though South Pas proved to be a tough team to beat.

Sophomore Harper Fox opened the first set with a block, but the Titans responded with strong serves and hits. Despite powerful kills from juniors Kate Kutzer and Molly Feldmeth and senior Taleen Mitchell, as well as many forceful hits from sophomore Maddie Saito, the Tigers were unable gain a lead on San Marino. Unfortunately, the Titans were able to block many of the Tigers attempted attacks, and San Marino launched its own to give them a small lead throughout the set. Mitchell and junior Maddy Hirano made many key defensive saves, but that was not enough to prevent San Marino from winning the set at 26-28.

The second set would be the lone set of the night that the Tigers would win. The Tigers gained a five point lead, kicked off by a Kutzer kill, followed by two aces from Kutzer, a block from Fox and Mitchell, and a ball hit out by San Marino. Both teams played remarkably good defense and offense. At the score of 10-8, Feldmeth and Hirano collided while diving for a tip, causing Feldmeth’s neck to be jolted back. After a few minutes on the ground, Feldmeth continued to play and rattled the Titan defense with many vigorous kills. The Tigers went on to win the set at a score of 25-22 after an errant San Marino block.

In the midst of the sets, South Pas players and athletic director Greg Luna could be seen protesting San Marino’s use of two Titan linesmen when it should have been a player from each school. Despite the outcry, no changes were made.

Similarly to the previous sets, the third also proved to be a nail-biter with close scores and comebacks from both teams. Players continued to excel on both sides of the court, and the Titans consistently gave the Tigers trouble with impressive serves, hits, blocks, and digs. Despite the close score, the Titans managed to win the set at 22-25 after a ball from South Pas was hit out.

The fourth and final set was similar to the others, with a close score and noteworthy performances on both sides of the court. However, the Tigers were given a yellow card after objecting that a San Marino serve went out when the San Marino linesman called it in-bounds. The Tigers, fueled by their anger, continued to fight but came out unlucky as San Marino grabbed the win at 23-25.

“Both sides played a strong game and both of us really wanted this win,” Kutzer said. “This game is going to motivate us to work even harder to the rest of league, and I know we’ll still come out on top for the rest of league.”

The Tigers next face off against the Wildcats at Monrovia on Tuesday, October 27. South Pas looks to jump back on its winning streak, and improve their league record to 7-1 and 18-3 overall.