Girls’ volleyball falls to Poly in CIF round two playoffs 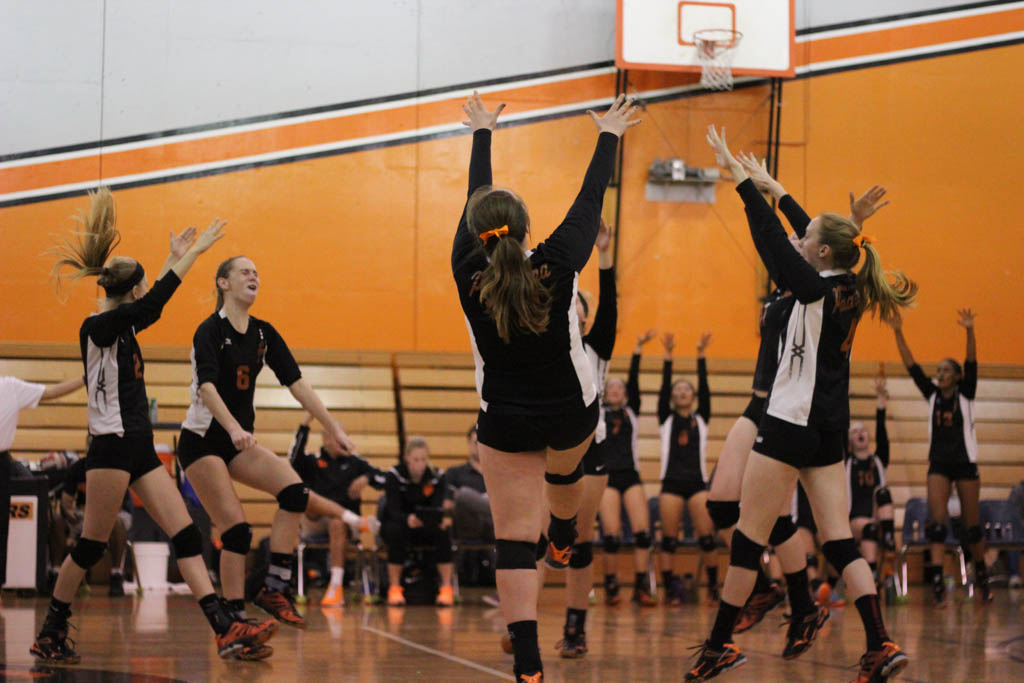 The first set started off well, with a 25-14 win for the Tiger squad. The score started off tied at 2-2, but the Tigers swiftly gained points, prompting a Poly timeout at 9-3 and again at 18-10. The Panthers continued to make errors, especially on serves. This allowed the Tiger offense to gain control, aided by outside hitters Sophia Hathaway and Taleen Mitchell, as well as an occasional hit by setter Molly Feldmeth.

The Tiger crowd supported their team the whole night, packing the stands for the heated matchup.

“I think the first game we came out with a lot of level-headed confidence- we weren’t too cocky,” senior Irene Siao said. “We didn’t get in our heads and we didn’t make many mistakes because we were just so pumped.”

Unfortunately, the Tigers did not carry the momentum into the second set, allowing the Panthers to take an early lead, 7-2. The home crowd also lacked energy, while Poly’s cheer leading squad continued loudly. The Tigers made more mistakes, especially on blocking and serve receive. They were never able to close the gap with the Panthers, ending the game at 25-17.

“We still were trying our hardest, we just made simple mistakes and played a little too sloppy,” sophomore Ellie Kutzer said. “If we had cleaned it up, we would’ve gotten our confidence up and given the crowd something to cheer for.”

The third set was much closer than the previous games. The score was tied in the beginning, but the Panthers eventually brought it to 20-17, prompting the South Pasadena coach to call a timeout. This did little to stop the Panthers’ momentum, which continued until game point, 24-20. The Tigers fought incredibly hard in the next few rallies, with outstanding performances by middle blocker Rowan Leddy and right side hitter Kate Kutzer. Eventually, however, the Tigers made a minor hitting error and lost the set 23-25.

“We were so excited that we kept making stupid mistakes and we got in our heads,” Siao said. “We were just nervous—we had the fear of the last game, the fear of a loss—and we caved under pressure.”

The fourth game was similar to the previous one, close but unsuccessful. The Tigers were losing 17-20, but managed to bring the score to a close 22-23. Sophomore Maddy Hirano had an impressive ace at game point, but another minor mistake ended the game, and season, 24-26.

Despite the loss, the Tigers are optimistic about next year’s season.

“Next year, we have many core players coming back,” head coach Ben Diaz said. “We definitely have the potential to have another good season,”