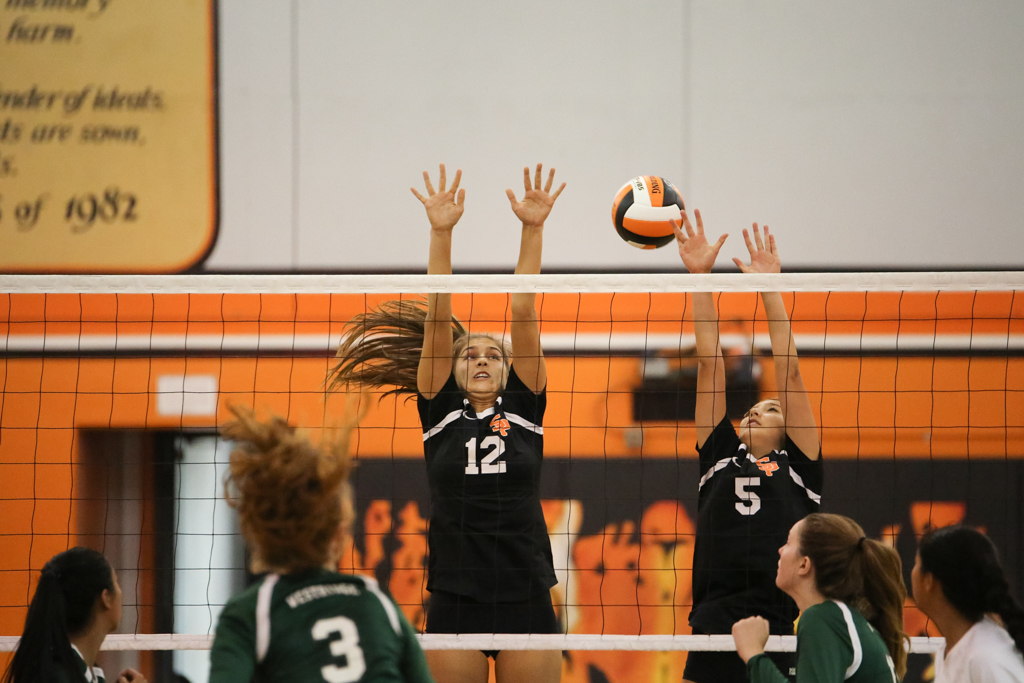 The girls’ volleyball team fell to Westridge in three sets with scores of 16-25, 17-25, and 11-25 in their season-opener at home on Friday, August 26. The Tigers’ last matchup against Westridge in the second round of CIF in the previous season had the same results. The Westridge Tigers outplayed South Pas, who were ultimately unable to overcome their errors, and now have an overall record of 0-1 because of it.

Senior Megan Wong garnered the first point of the match with a hit, but Westridge soon fought back with a kill. Strong plays from senior Molly Feldmeth allowed South Pas to grab a small lead. However, Westridge battled back with several kills and aces on a seven point streak to jump in front. Many errors such as balls going out-of-bounds and into the net allowed the visitors to expand their lead. The Tigers attempted to gain back their footing off of strong plays, such as a block from junior Maddie Saito. Despite South Pas’ effort, Westridge took the set 16-25 after a hit from the away team.

The second set began with an out-of-bound South Pas serve. Westridge earned two more points before Feldmeth retaliated with a powerful kill to bring the score to 1-3. Though senior Maddy Hirano played solid defense for the Tigers, Westridge was still able to find holes and expand their lead. South Pas attempted to rally back, with several impressive saves from multiple players. Hirano and Feldmeth led the team in defense and offense, while Saito contributed solid digs and hits. A block from Wong brought the Tigers within four points of catching up as the score was 15-19, but Westridge was able to slip away. The Tigers were able to score two more points before the visitors took the set at 17-25.

After an impressive rally between the two teams, the Tigers took the first point of the third set after a kill from Feldmeth. A string of errors allowed Westridge to again capture the lead. Two consecutive blocks from Feldmeth and sophomore Kimi Brown put the Tigers three points behind at a score of 3-6. South Pas would not be that close for the remainder of the set. Westridge continued to dominate offensively, and were able to stop many of South Pas’ attacks. Feldmeth earned the last two points for the Tigers with kills before the ball was hit out of bounds to give Westridge an 11-25 victory.

“It was our first game playing together as a team, so for a first real game and all the intensity that comes with that we played pretty well” Hirano said. “We have a lot of potential and we gave it a lot of effort, but there are definitely things we need to improve. Passing and serve-receive are definitely things we need to work on, but cohesively we were okay today.”

The Tigers look to improve their 0-1 record in their next game against Mayfield on Tuesday, August 30 at 5:00 p.m. at home. South Pas fell to the Cubs in their previous pre-season match-up.