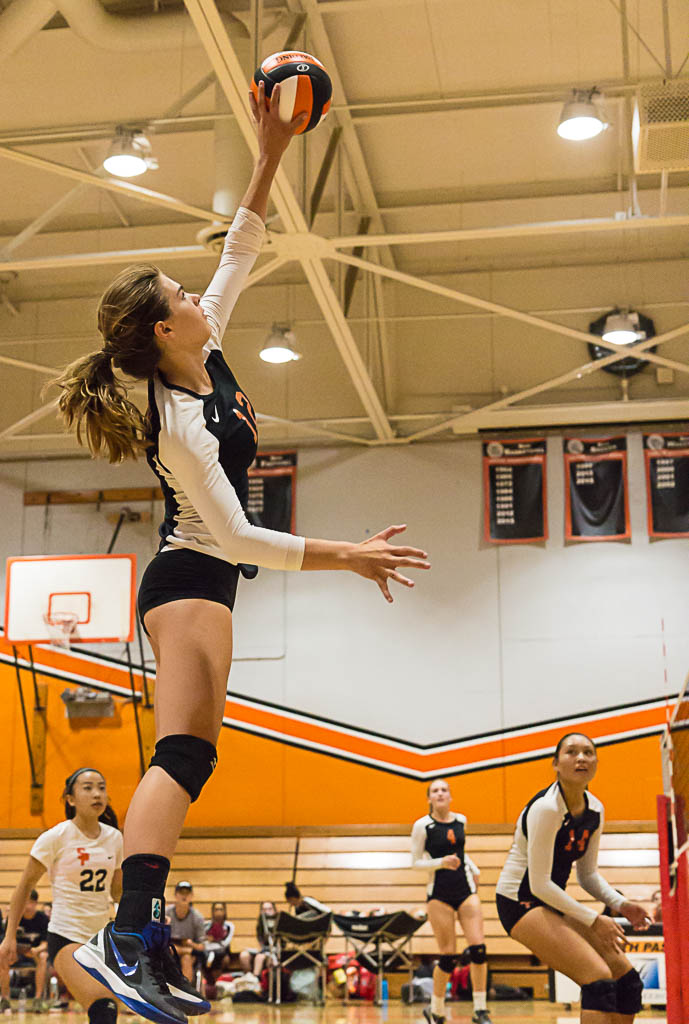 Freshman Lola Foord elevates for a ball against Mark Keppel.

The girls’ volleyball team triumphed over Mark Keppel High School in their second game of the season at home this Tuesday. South Pasadena defeated the Aztecs in three sets with scores of 30-28, 25-12, and 25-18. The Tigers struggled to maintain their momentum in the first set but found their stride in the second.

Freshman Lola Foord started the first set with a kill, which was followed by an ace from freshman Lexi Schroeder. The Tigers offensive prowess coupled with Mark Keppel’s lack of ball control gave South Pasadena a four-point lead. The Aztecs struggled to communicate, sending over free balls that were easily received by the Tigers. Mark Keppel improved their play at the net, subsequently bringing the score to a tie at 10-10. Although South Pasadena played aggressive offense with kills from Foord and junior Kimi Brown, Mark Keppel played consistently as the score rose to 20-20. Missed serves and small errors kept the score from rising more than one point in favor of each school. Seniors Sophia Benzoni and Isabel Bluml helped maintain South Pasadena’s score in the close final points of the set. A kill from senior Maddie Saito ended the set at 30-28.

South Pasadena started the second set slowly, while gaining momentum after an ace that brought the score to 5-4. Powerful serving from the Tigers increased their lead by four points. Mark Keppel trailed behind South Pasadena, and was typically unable to return strong hits from Saito and Foord. Mark Keppel was only able to return free balls, giving the Tigers opportunities to block and tip. South Pasadena kept Mark Keppel on their toes bringing the score up to 24-12. The set ended with a missed serve from the Aztecs and a final score of 25-12.

After Mark Keppel started with an early lead, South Pasadena staged a comeback behind kills from Saito and Foord . The Tigers powerful offense and strategic tips brought the score to a tie at 10-10. The score rose steadily to 19-18 with good defense from both sides. South Pasadena pushed hard the last few points ending the set with a score of 25-18.

“I think we played well as a team today,” Brown said, “It was a little rocky at the beginning but we finished strong.”

The Tigers will play Alhambra High School at home on Friday at 3:30.