Girls’ volleyball claims 3-0 victory in first round of CIF 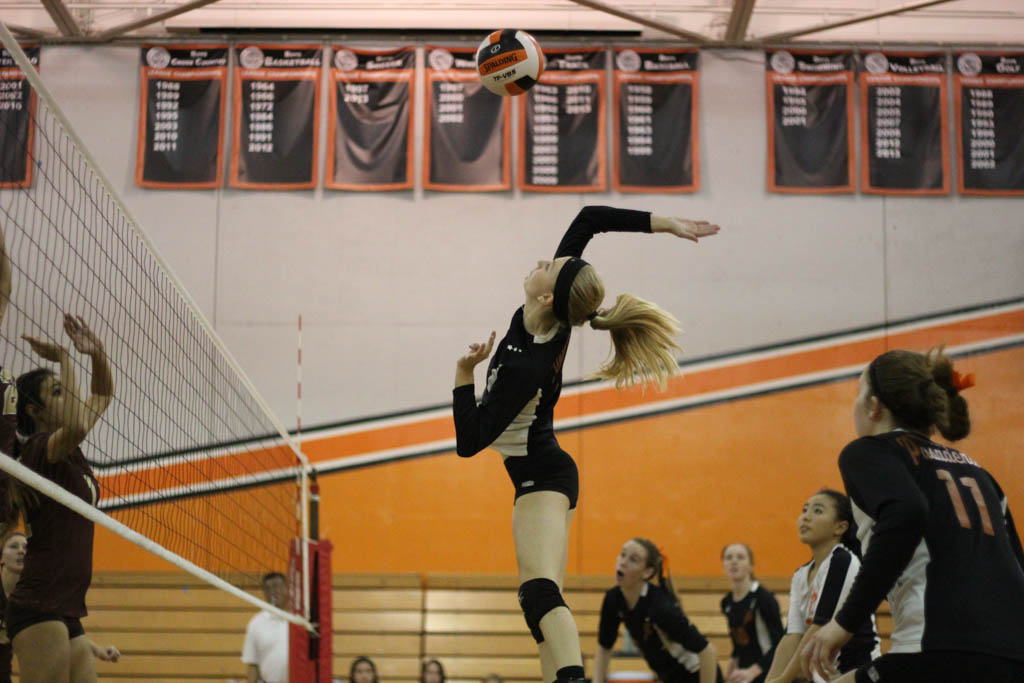 The Tiger dominance was apparent from the beginning, with South Pasadena forging a strong lead in the first few minutes. Unfortunately, with the score at 6-1, sophomore Kate Kutzer twisted her ankle landing hard on the ground and had to be helped off the court. The Tigers continued successfully, however, and Kutzer eventually rejoined the team to a loud ovation from the stands. She would go on to contribute to the Tigers’ first set victory, 25-16.

“Throughout the game, we were just more energized; we wanted it more,” coach Ben Diaz said. “Based on what I saw, my girls just played with a lot of will.”

The momentum continued into the second set, with strong performances by many South Pasadena players. Sophomore setter Molly Feldmeth had some over-sets and a hit, catching the entire Torrance defense by surprise on a particularly shifty play and widening the lead. The Tiger offense was also strengthened by junior Taleen Mitchell, who had numerous kills throughout the match. South Pasadena was well ahead at 24-17, when a missed serve prompted a promising push from West Torrance. The Warriors brought the score up 4 points, but couldn’t complete the comeback, losing 25-21.

The last set was the most energetic and quickest of the match. By this time, the Tiger student section was in full force, giving the opposing players a piece of their mind more often than not. The Tigers were up 9-0, when West Torrance called a timeout. The Warriors slowly gained momentum, but not enough to tie the score up. The set was ended at 25-17 with a strong kill from middle blocker Shanovi Bass.

“I think that we played better in this match than in league play – we really wanted this win and it means a lot to us,” senior Rowan Leddy said. “We want to reach the finals of CIF, and this was the first step to doing that, so we played really aggressively.”

The Tigers next match is on Thursday, November 11th, against Polytechnic at 7 pm in Pasadena. In preseason, they lost to the Panthers, but the Tigers are optimistic about the upcoming match.

“They first time they played us, it was our first game, so we obviously didn’t play as well,” senior captain Sophia Hathaway said. “We’ve definitely improved since then, so we just need to play the game that we’re playing now, and I think we’ll be fine.”