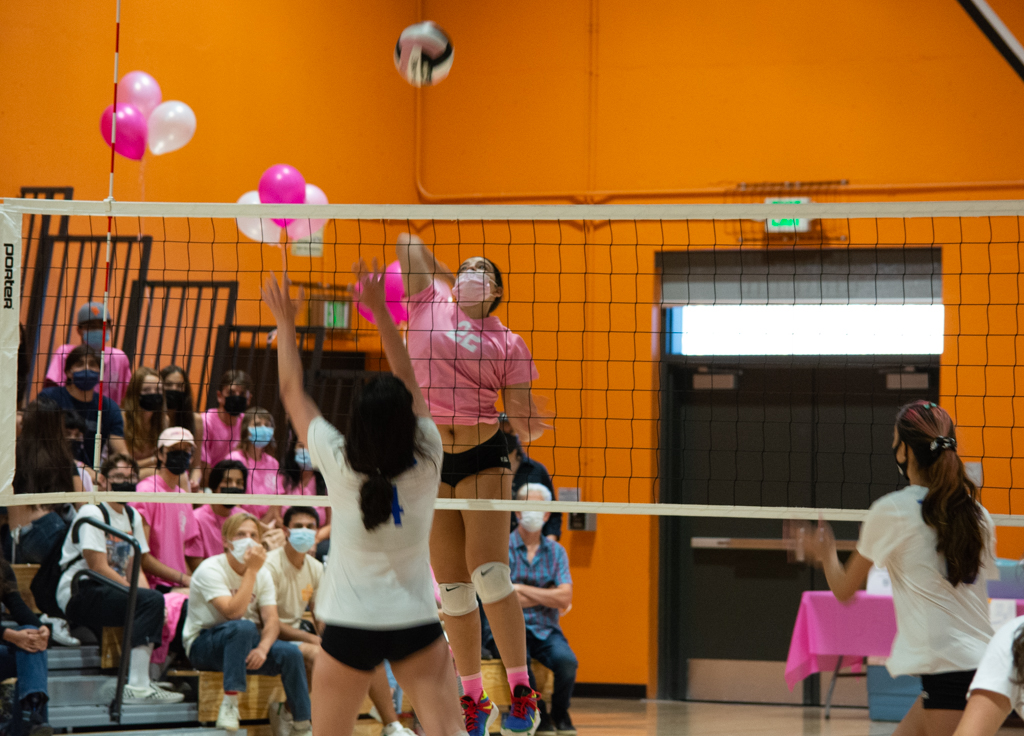 South Pasadena swept San Marino in three sets in their Tuesday, Sept. 21 league game that raised awareness for breast cancer survivors and those currently undergoing treatment. The Tigers made quick work of the Titans’ defense in all three sets, keeping the Tigers’ undefeated league streak.

In the first set, the Tigers struggled to maintain any significant lead over the Titans. Even with consistent sets from sophomore setter Kendall Taylor and sophomore outside hitter Jenna Garner slamming the ball down, the Tigers could not keep the ball. However, the Titans’ constant free balls helped the Tigers get back on their feet and push forward. Tips from senior outside hitter Abby Garner propelled South Pas into a brief 8-6 lead, but as the girls struggled to get balls off the net, the Titans quickly overtook them 9-8.

A bombardment of strong serves from the Tigers pushed the girls to a significant lead as the set continued, and the set ended 25-17 in the Tigers’ favor.

As opposed to the first set, the Tigers demolished the Titans and maintained a significant lead throughout the second set. Sophomore outside hitter Helena Foord’s potent angle shots decimated the Titans, along with an unstoppable offense that launched South Pas into a 12-4 lead. Unrelenting passes from sophomore libero Mia Ramos prevented the Titans from scoring and a final serve from senior setter Samantha Molina won South Pas their second set, 25-12.

The Tigers, at the start of the third set, struggled to get their hits over the net and past blocks by the Titans. However, great net coverage by Ramos and strong angle shots by Foord helped the Tigers distance themselves. Additionally, short serves from junior middle blocker Ava Dorny killed the Titans, resulting in South Pas’ 15-4 lead. After a brief hiccup, the Tigers regained control of their serves and came back to win 25-10.

Tuesday’s game supported the Cancer Support Community Pasadena, a group that supports cancer patients undergoing treatment. In addition to the Tigers’ pink uniforms, the Community held a raffle and sold pink shirts to fundraise for their cause. A special guest appearance by Lolita Lopez, a breast cancer survivor and mother of senior Lulu Talesnick, preceded the game.

“The game was really fun and it’s so rewarding to be here with all these people and donations supporting the Cancer Support Community,” Molina said. “It’s so nice to bring awareness to this amazing cause, especially since one of our former team moms was affected.”

The Tigers will challenge their rivals the La Canada Spartans, who also remain undefeated 3-0 in league, on Tuesday, Sep. 28 on the road.