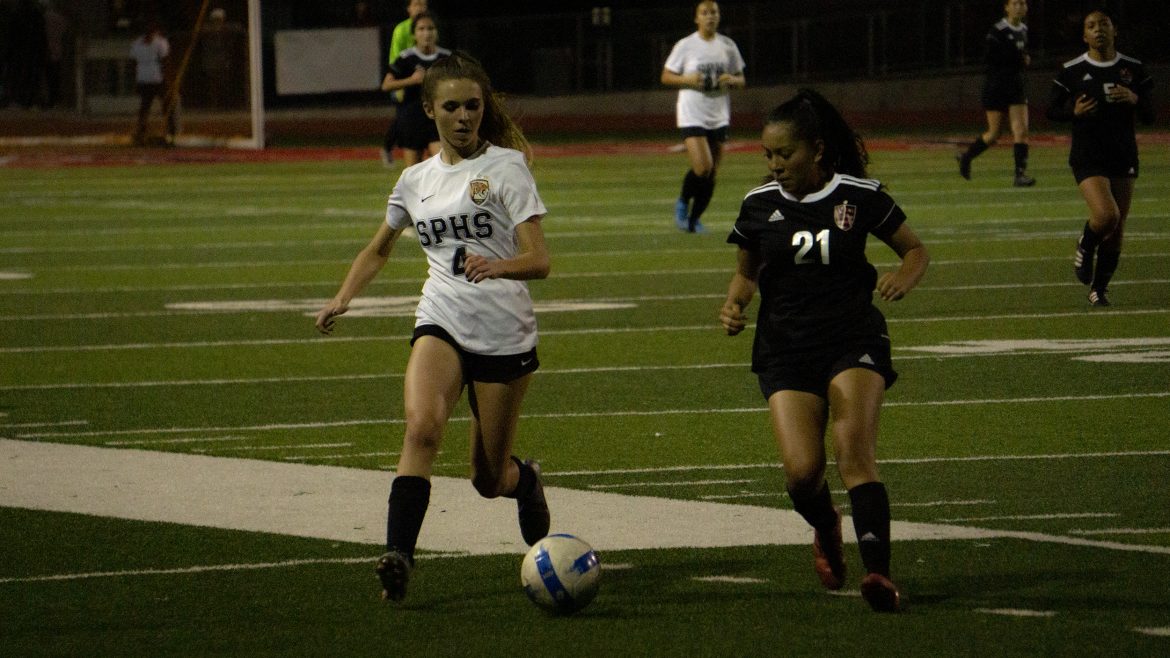 Debatable calls slowed the tempo of the match in the last minutes and the Tigers were unable to break the tie.

Girls soccer drew against the Sierra Vista Dons, 1-1, on the road Tuesday, Dec. 10, in a match riddled with questionable whistles.

South Pas struggled to finish any of the chances they created going forward, ending the half scoreless. The Dons came back strong after the break, pushing most of the play on the Tiger side of the pitch. South Pas broke ahead late in the second half, but Sierra Vista quickly equalized, concluding the game with a 1-1 tie.

After the first ten minutes, the Tiger attack came alive with great passing and connection. Senior midfielder Jessica Lat, who made her season debut after a battling offseason injury, proved to be a multi-faceted threat on the right wing through her expert give-and-go’s and pace. She muscled through the opposing defense and created many scoring opportunities for South Pas in the first half.

Offensively, senior right forward Hannah Thompson sprinted down the wings and whipped multiple balls into the box, but no one was there to finish the job. Senior midfielder Andrea Castellanos’ physicality and agility made her the target of opposing fouls, ultimately forcing her to be subbed out with an injury in the second half.

The best chances of the first 40 minutes came from senior co-captain Corey Segal. Segal dribbled to the left corner and crossed the ball to Lat, whose glancing header was barely saved. She also had a strong opportunity when she curled a ball into the top left corner from 20 yards out.

South Pas dominated the first half, but failed to capitalize on the chances they created.

Sierra Vista returned from the break with increased energy and offensive cohesion, forcing South Pas to concentrate its focus and players on defense. However, the team did not abandon its attack completely. Minutes later, Lat grabbed a season debut goal, tapping the ball in off a rebound from a Segal strike.

The Dons responded with pressure of their own, which manifested in fast breakaways that led to repeated corners. This heavy and aggressive push, coupled with a slew of questionable calls, kept the play on the South Pas half and ultimately lead to a Sierra Vista equalizer.

South Pas struggled to create any chances following its opponent’s goal. The Tigers committed a large number of controversial fouls, crippling their attacking rhythm, and the match ended in a 1-1 tie.

“I found it really weird how many calls the refs made in such a short period of time. The amount of fouls called in the last couple of minutes was extremely excessive and the calls were pretty weak,” Dunville said. “It just slowed the game down for no reason.”

Regardless of the result, the Tigers remain positive about how the season’s outlook.

“[This game] was a good indicator of where we’re at right now,” Lat said. “For the most part we played really well, getting passes together. Now, I think it’s just about finding our rhythm as we move forward into the regular season.”