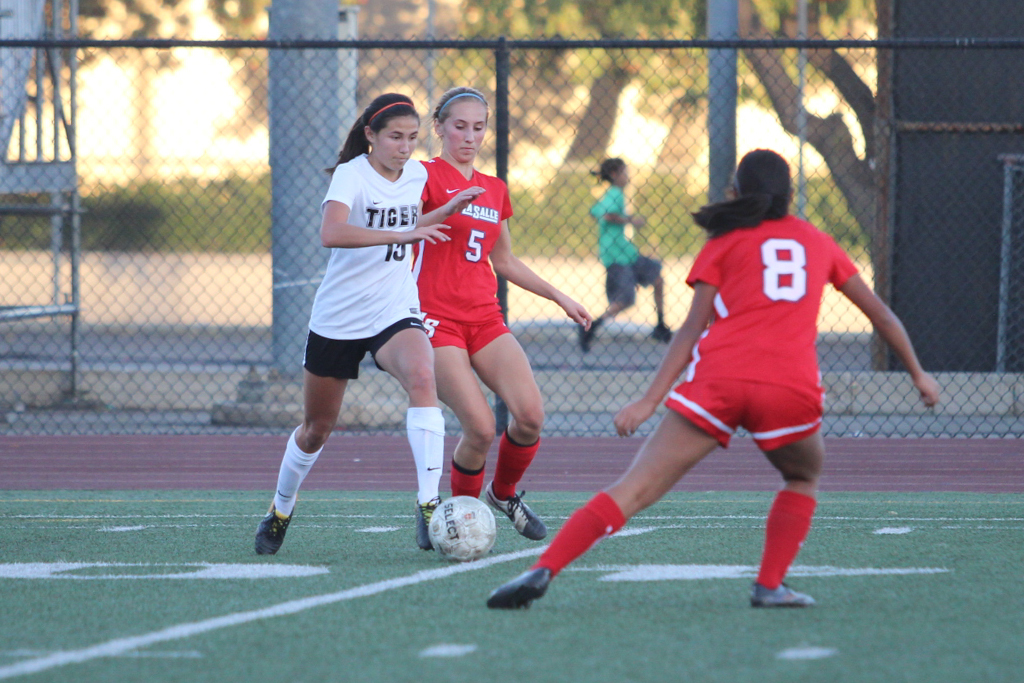 Sophomore midfielder Corey Segal dribbles the ball between two Lancer defenders, as the team struggles for dominance at midfield. The win maintained South Pas' 4-0, undefeated record, as the team developed its defense with another shutout.

The varsity girls’ soccer team came out strong with a 2-0 victory over the La Salle Lancers at home on Tuesday, December 5. Although initially apprehensive of the formidable Lancers, the Tigers were able to maintain composure and fend off all La Salle advances while landing a couple goals of their own. South Pas is establishing an intimidating presence coming out of its first four preseason games with a completely clean sheet, and a season record at 4-0.

Undoubtedly, the Lancers set a whole different tone to the match than the ones previous; while last week’s games allowed the Tiger offense to showcase their striking skill, today’s game truly tested the Tigers’ capacity to defend their territory. Immediately following kickoff, La Salle players challenged South Pas’ midfield and were often able to snatch possession. Junior defenders Jade Myer and co-captain Alyssa Bonk played critical roles in deflecting the Lancer attack, but it was junior defender Emma “Booch” Barrera whose expertise tremendously shined. Barrera defended with a relentless zeal, always stopping La Salle forwards in their tracks and getting the ball up and out of the Tiger box countless times. Still, La Salle managed to bypass the defense on multiple accounts, but senior goalkeeper Sophie Reynolds stood as a stalwart wall, flawlessly seizing each shot on goal. Due to these players’ key endeavors, La Salle could not manage to score all match-long.

Nevertheless, gameplay remained intense and aggressive. Girls on both teams overstepped their boundaries causing many fouls, affording players many free-kicks. Unbeknownst to the Lancers, South Pas possessed a secret weapon within senior defender and co-captain Riley Segal’s unequaled punt. In seasons past, R. Segal supplied the Tigers with game-defining free-kicks; this tradition continues today. Provided with an opportunity from the 35 yard-line, her kick launched the ball in a beautiful arc above all the Lancers’ heads and powerfully into the net. This first triumph mobilized the rest of the Tigers, as junior and sophomore midfielders Rainey Tilley and Corey Segal dug deep into La Salle domain, supplying the frontline with strong striking situations. Senior forward Harper Fox finally was able to capitalize on a cross from junior forward Uma Hornish securing South Pas a two-point upperhand at the close of the half.

“As a team, we did a really good job of keeping up on our marks, getting wide, and reaching the end lines to get our crosses off, because that is where we succeeded the most,” Barrera remarked. “We were a unit; we also never panicked on the ball, especially in the back where things get very scary, and settled on the ball moving it up to our forwards. Man-marking today was really important– we stayed tight on our marks and were able to press hard and get the ball up.”

The latter-half of the match spelled difficulties for the Tigers; La Salle reentered voracious for a comeback that South Pas was almost unprepared for. Admittedly, the strained Tiger front line and midfield began to falter: balls that should have been settled were lost to chaos and passing became sloppy in the midst of the drama. Lancers were continually privy to striking openings as they juked around the weary Tigers. In South Pas’ period of weakness, its defensive line truly rose to the occasion. Junior goalkeeper Noemi Howland performed save after save, sliding where need be and leaping to meet shots in the air. R. Segal cleared balls gone awry, forcefully kicking them way upfield. Again, Barrera acted as the Tigers’ most valuable player, foiling the Lancers in extremely alarming circumstances. South Pas maintained their spotless sheet due to a crucial play on Barrera’s part towards the end of the match, when she mowed the ball up and out of Tiger terrain past a flurry of La Salle forwards and closely along the sideline.

“Going into the match, I definitely wanted the girls to understand that [La Salle is] a quality, caliber team. With that mentality, I’m glad we got ahead when we did. We are still getting used to playing a team as quick as they are, which is something that is good for us– that is who we will compete against later in the season during Rio Hondo play,” head coach Victoria Lathrop observed. “We were getting stretched out a little too thin in the middle, allowing them to control the middle and look to play those long balls. Emma Barrera had a fantastic game today, she was an anchor in the back alongside Riley Segal. It was good to see our defense get tested, because they really haven’t had a chance to do that.”

The preseason is coming along swimmingly for the girls. They will look to continue their clean, undefeated streak at their next game against Polytechnic at an away game on Thursday, December 5.