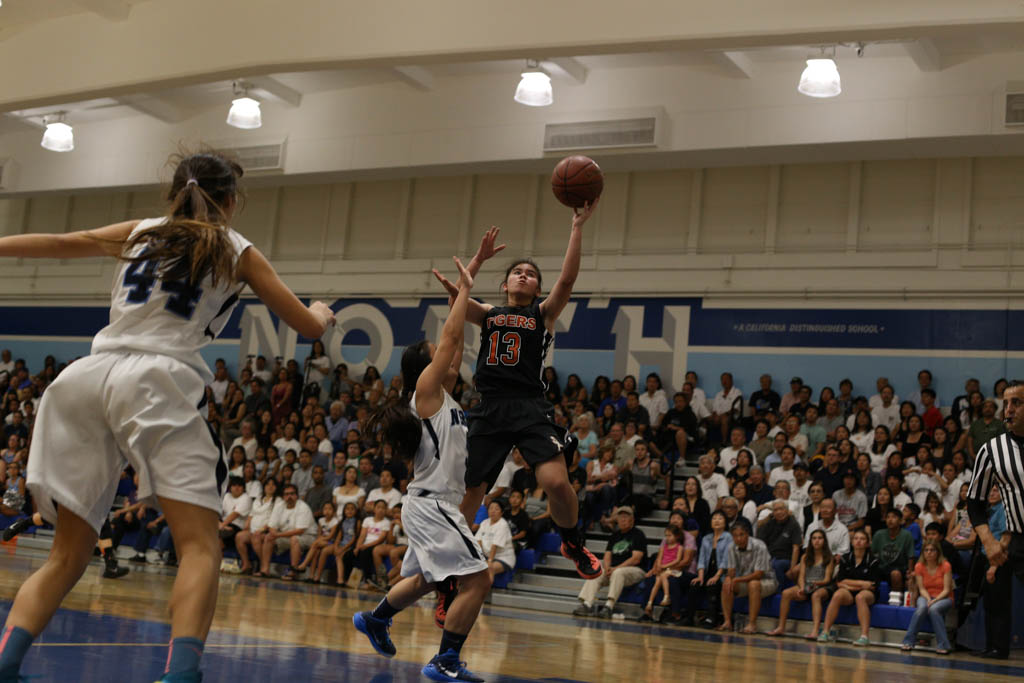 The girls basketball team gave its best effort in the 70-57 loss to the North High Saxons, ending their record breaking season with an overall 24-3 record.

With the winning team moving to the quarterfinals, South Pas drew first blood after senior center Sophia Hathaway scored two points. She would be followed by senior point guard Elise Takahama making for a decisive four point conversion. North High quickly changed their tactics and dug in, forcing multiple turnovers with their press defense. The Tigers were slow to react against the press and lost the initiative to the Saxons, who retook the lead 16-10 ending the first quarter.

Starting the second quarter, the Tigers were still under pressure from the determined Saxons and their press defense. Desperate to change the tempo of the game, sophomore shooting guard Juliana Tom got the girls back on their feet after a crowd pleasing three pointer. She would be followed by senior point guard Lexie Scholtz with an off the glass three pointer to close the gap. Junior Kristen Kafkaloff would chalk up five points of her own to end the half, leaving the Tigers down only 33-28.

Now with the momentum on their side, the Tigers managed to stay neck and neck with North High. Both teams tallied up points of their own with Tom putting the game in arms reach for the Tigers with two clutch three pointers. With South Pas rolling on a hot streak, North High called a timeout to change their strategy. Coming back on the court, the Tigers suffered a first quarter relapse when the Saxons stepped up their defense and caused multiple turnovers.

North High was able to springboard their offense and left the Tigers behind in a frenzy of points racked up. Coupled with cold shooting and the opposing crowd, the Tigers weren’t able to connect for the rest of the quarter. Although the day belonged to the Saxons, Scholtz gave one last two points for South Pas, leaving the final score at 70-57.

Baseball suffers loss to Alhambra in final game before league