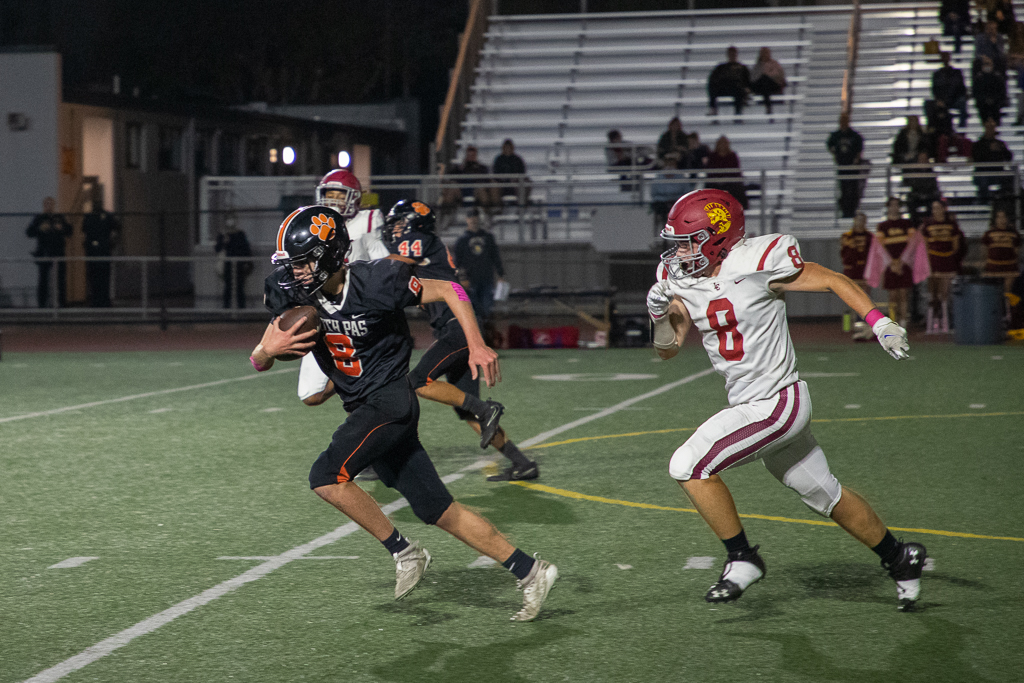 Football ripped off their third consecutive win on Thursday, Oct. 7th, defeating league rival La Cañada 23-22 in a back-and-forth, competitive game. Building on their momentum and a mid-season winning streak, the Tigers used a late fourth quarter field goal to edge the Spartans by a point. Each team held a touchdown lead at some point throughout this close contest, but it was the South Pas sideline that celebrated after the final whistle.

Penalties plagued the Spartans on their first drive, and a high snap over the quarterback’s head backed them up 30 yards behind the line of scrimmage. On the next play, sophomore Luke Riffle intercepted a Spartan pass and tip-toed through an obstacle course of La Cañada players for a solid return.

Senior quarterback Noah Aragon brought his best spiral against the Tiger’s Rio Hondo League foes, connecting with junior Quinn Stirling to put South Pas yards from the end zone. Senior running back Alex Gonzales punched it in a few plays later to put South Pas on the scoreboard. Midway through the first quarter, the Tigers held a 7-0 lead.

Another high snap over the quarterback’s head stunted La Cañada’s second drive, and they punted the ball back to South Pas. With the Tigers holding possession, Aragon rolled to his left and fired the ball 40 yards downfield. Junior Richard Conti was on the receiving end of Aragon’s prominent pass. After multiple red zone incompletions and a failed fourth down conversion, South Pas came up scoreless and couldn’t extend their lead.

La Cañada was determined to tie the game, snatching momentum away from South Pas with a potent passing attack. Even a sack from freshman James Dowd couldn’t slow the Spartans, as their quarterback connected on a deep ball to a receiver in the end zone. After the missed extra point, South Pas led 7-6 late in the second quarter.

Now it was the Tiger’s turn to take the momentum, letting senior Jack Riffle do what he has done all season and shred defenses on the ground. Junior Nick Eshom, junior Jackson Freking, and Conti got involved with first down catches. Aragon then used his legs to score, running behind blockers for a 20 yard touchdown. With a clicking offense and high-flying defense, South Pas took a 14-6 advantage into the half. 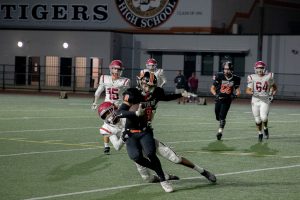 Each offense gave the scoreboard operator a break in the third quarter with dropped catches, failed fourth down conversions, and unproductive runs. In the fourth quarter, however, each team lit up the scoreboard for a wild finish.

La Cañada pieced together a solid drive, riding their running back all the way to the pylon to take the lead. The Spartans converted the two-point conversion to take a 22-14 lead.

La Cañada intercepted an Aragon attempt on the Tigers next drive and looked to take a double-digit advantage. The Spartans failed to find the end zone despite their field position and lined up a short field goal. The game seemed to be slipping away from the Tigers, their 14-6 quickly erased. Instead, Jack Riffle sparked a South Pas rally with a game-shifting play: blocking the kick, scooping up the ball, and sprinting 80 yards across the field.

Unlike La Cañada, South Pas took advantage of their field position and scored on an Eshom touchdown catch. This connection gave Aragon a touchdown run and pass on the night. However, South Pas couldn’t connect on the two-point conversion and trailed 22-20.

After a Spartans punt, the Tigers stringed together a clutch drive to take the lead. South Pas couldn’t convert a 3rd & 10 on La Cañada’s 15 yard line, bringing out junior Aidan Kinney to attempt a field goal for the lead with one minute left. Kinney, 35 yards away, booted a game-changing kick straight through the uprights to give South Pas a 23-22 edge. Kinney turned to the crowd and raised a fist in celebration, nailing a kick that put the Tigers 60 seconds from victory.

However, South Pas still needed to stop La Cañada’s offense that had been rolling most of the night. After three incompletions from La Cañada, South Pas needed but one stop to seal the game. They didn’t get it. The Spartans converted a 4 & 10 on a catch down the sideline with 13 seconds left. The crowd was silenced for a moment before senior Sage Wayans brought down the quarterback and erupted the Tiger’s faithful. La Cañada, with one second left, would have one final chance to heave the ball downfield and pray it was caught. Instead, as the quarterback waited for his receivers to get downfield, Dowd ended the game with an incredible sack. The Tigers held on for a 23-22 win, their third straight victory. 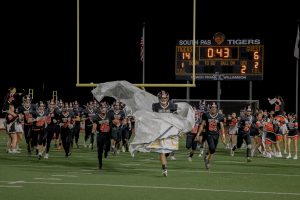 “We started off a little slow at the beginning of the season…but we learned from those three hard-fought [losses] and we’ve bounced back from that,” Aragon said. “During practice, we’ve really stepped up the intensity, we’ve really focused and dialed everything up, and that’s helped us execute on offense and defense.”

That intensity and focus has helped South Pas limit their early-season flaws. The Tigers have held onto the ball, executed on special teams, and improved at tackling, three areas they struggled with early in the year. All three of those elements have been critical in turning their season around with three straight wins.

The Tigers improved to 2-0 on league play this season and 4-3 overall. They’ll look to win their fourth in a row next Friday, Oct. 15, at home against Polytechnic.