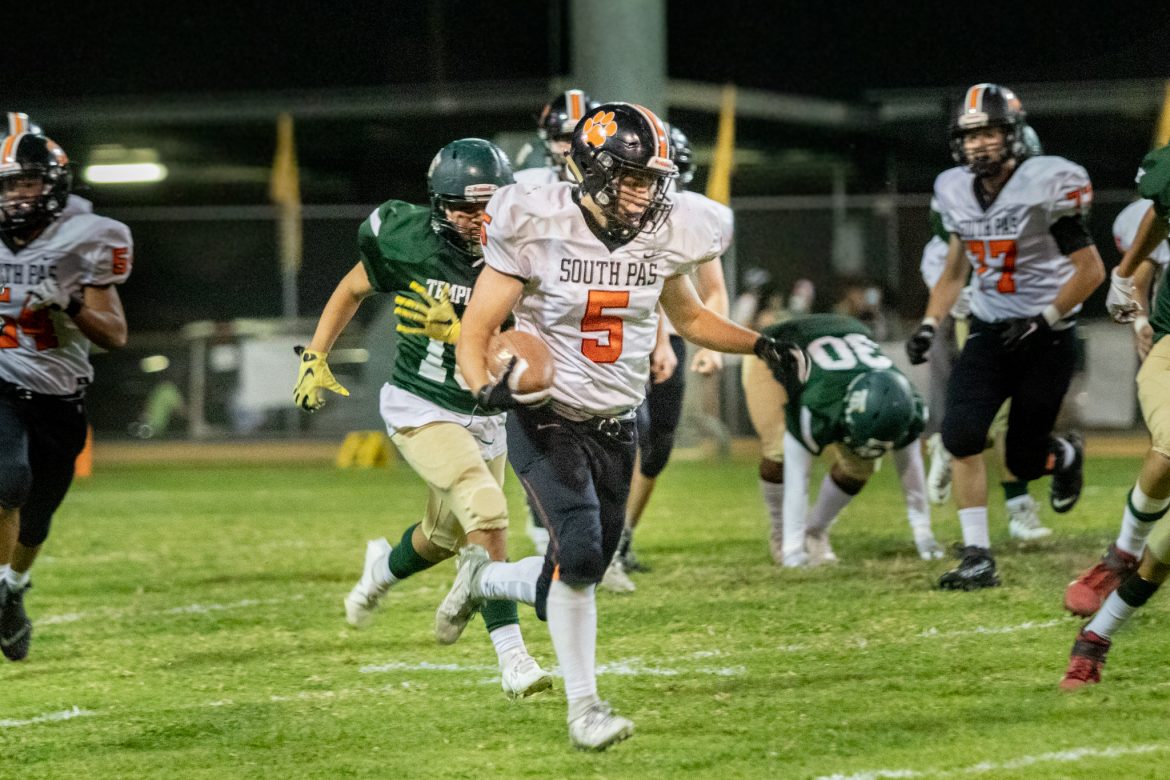 The Tiger Color Day game was a success for South Pasadena. Football rode a considerable lead against the Temple City Rams on Friday, Oct. 1 in their first game of the CIF season, walking away with a 41-12 win.

Temple City started with the ball, but the Tigers gained control through an interception early on. Sophomore Luke Riffle darted down the field. However, he was thwarted by Ram’s defense. A series of tackled plays proved to just be a warmup for the Tigers. They quickly regained their footing with junior Aidan Marrujo passing to senior running back Jack Riffle who zoomed past the Rams’ defensive line and scored the first touchdown of the game.

An impressive offense is only half of South Pas’s strength. The Tigers pulled out all the stops in their defensive strategies. Senior quarterback Noah Aragon and L. Riffle dog-piled the Temple City offense, being one of the first of many uses in the game, causing Temple City to not score any touchdowns in the first three quarters.

Marrujo and Aragon’s back-and-forth with junior Aidan Kinney caused a swift advance to the 50-yard line. This advancement proved crucial in the second touchdown for the Tigers, when Kinney ran down the field to score.

Quarter one finished with the Tigers holding a significant 14-0 lead which they maintained throughout the rest of the night. During quarter two, South Pas’s further perfected their defense with a series of interceptions and grew more assertive in their plays. These included stronger attempts to thwart Temple City from scoring, most notably by L. Riffle and sophomore Devin Robinson.

But Temple City was anything but concerned, they prevented Aragon from scoring by a tackle after Aragon’s fake-out pass to a teammate.

But the dry spell was short-lived as the Tigers gained momentum. Junior Jackson Freking bounded to the box, successfully bringing the score to 20-0. J. Riffle proved to be the jewel of the team, securing another second-quarter touchdown through an untouched leap past the goal line. Minutes later, kicker Kinney’s field goal advanced the Tigers even further to 27.

To close the second quarter, junior Quinn Stirling took the ball down to the end zone, bolting past Ram defenders to secure a touchdown and a 34-0 lead.

During halftime, the Tigers recharged as the Ram’s homecoming celebration was underway, complete with boisterous cheering and fireworks.

Bright-eyed and ready for action, South Pas returned with a similar strategy to the first half; refusing Rams’ advancement while simultaneously controlling the ball. Tackles from Freking and blocks from freshman James Dowd prevented Temple City from making gains down the field. Once the ball landed in J. Riffle’s grasp, he secured his fourth touchdown via a breakaway from the 20-yard line. 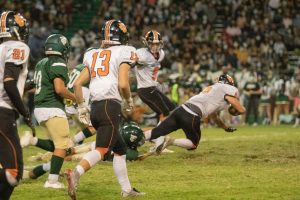 With a comfortable 41-0 lead, J. Riffle and Aragon handed the game to the second team, which included Freking as quarterback. Temple City attempted a run but were foiled at the 50-yard line. They later advanced to the 20, but were squashed by South Pas yet again and the Rams were ultimately unable to score in the third quarter.

As the second squad rotated in, the Rams’ fourth quarter was less stagnant. With 10 minutes left on the clock, the Rams’ were able to sneak in two touchdowns. But the Tigers prevented any more of the Rams attempts to close the gap in the final 30 seconds of the game by blocking their touchdown runs. The game closed with a much needed 41-12 win for South Pas.

“I think it went pretty well,” J. Riffle said, “We got ahead pretty early and we were able to put our second team in and they scored some reps.”

The Tigers look to ride this win to their next game against La Cañada rivals on Thursday, Oct. 7.