Football beat down by San Marino in color day matchup 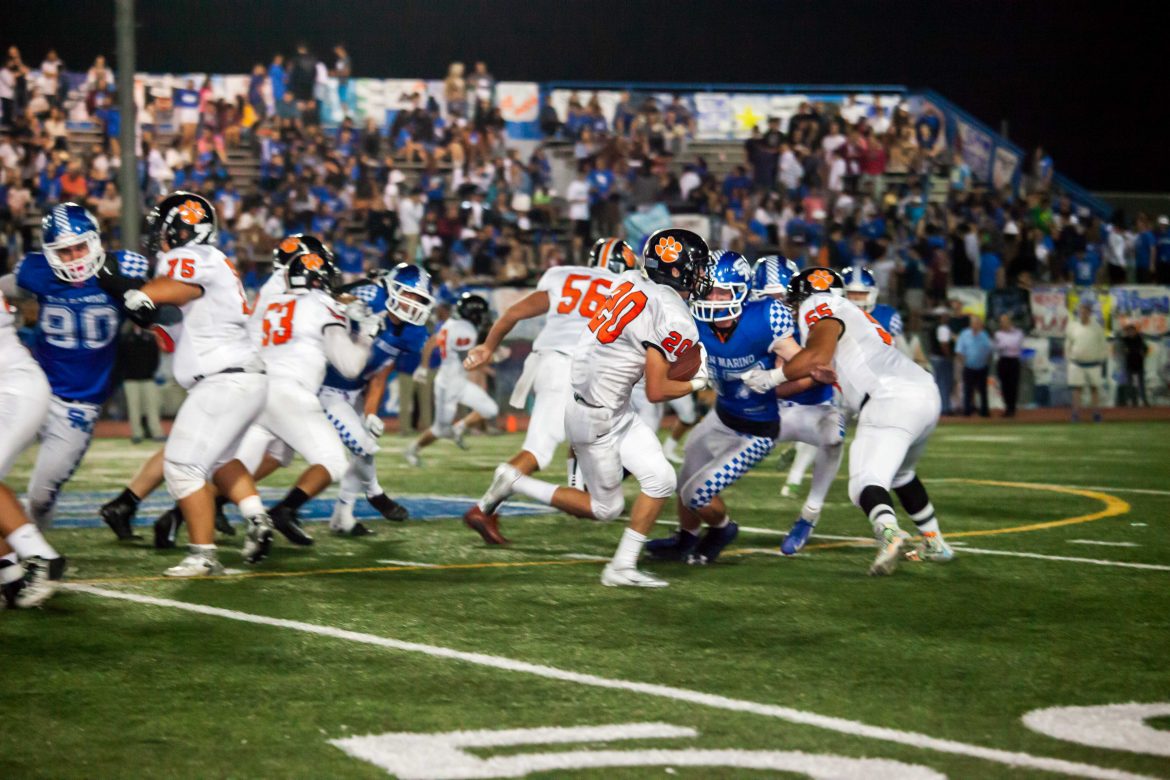 Junior Ivan Estrada's outsides runs provided the sole spark for the Tiger offense against the Titans.

After winning the pregame coin toss, San Marino elected to start with the ball on their home field. Right from the opening play, it was evident that San Marino had an advantage on the offensive line. Senior Titan running back Beau Hobbie torched South Pas’ defense all night, constantly running untouched into the secondary and evading Tiger safeties in the open field. In their opening possession, Hobbie pranced into the endzone following a dominant drive down the field, the first of five for the San Marino tailback. Following the Titan score, the Tiger offense, led by senior quarterback Jaden Gallego, was forced to punt. South Pas had trouble converting on offense all night, and even had trouble recovering San Marino’s short kickoffs. 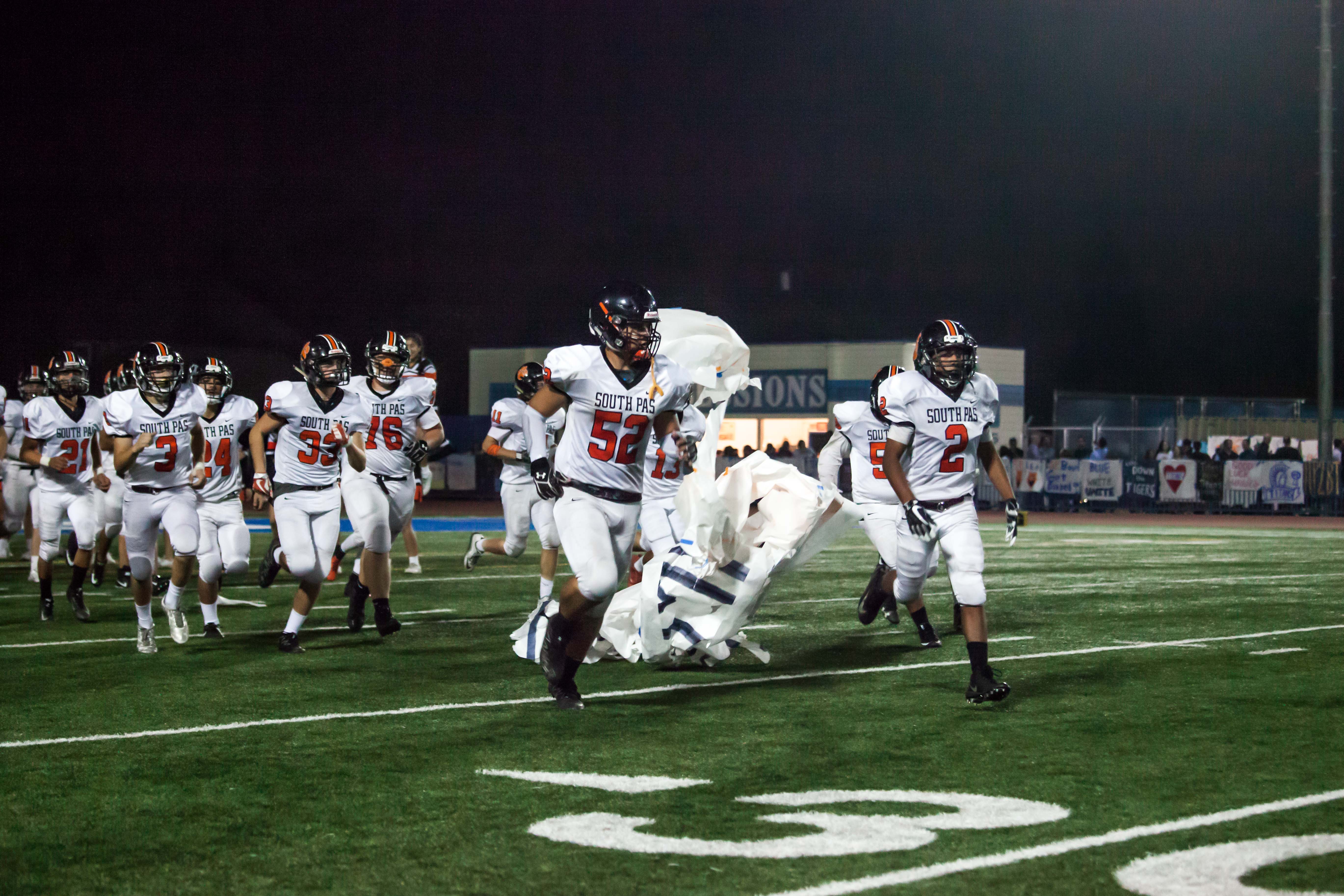 Energized by the lively crowd, the Tigers burst out onto the field to the sound of cheers.

The South Pas offense was unable to match San Marino’s scoring and quickly found themselves down double digits. Junior running back Ivan Estrada was able to find some success running outside the hashes, but the Tigers were unable to string together any long drives. Errant throws and dropped passes hampered the success of the SPHS offense.

In the second quarter, senior Ruben Echeverria picked off the Titan quarterback in the endzone in what was a big stop for the Tiger defense. However, South Pas was unable to retain the momentum for long, giving the ball back to San Marino after fumbling the ball in their own end zone and recovering it for a safety. Seniors Logan Svihovec-Mccarty and Johnny “Realman” Xiao made key tackles for the Tigers, but after another Titan score, SPHS went into the halftime break down 29-0. 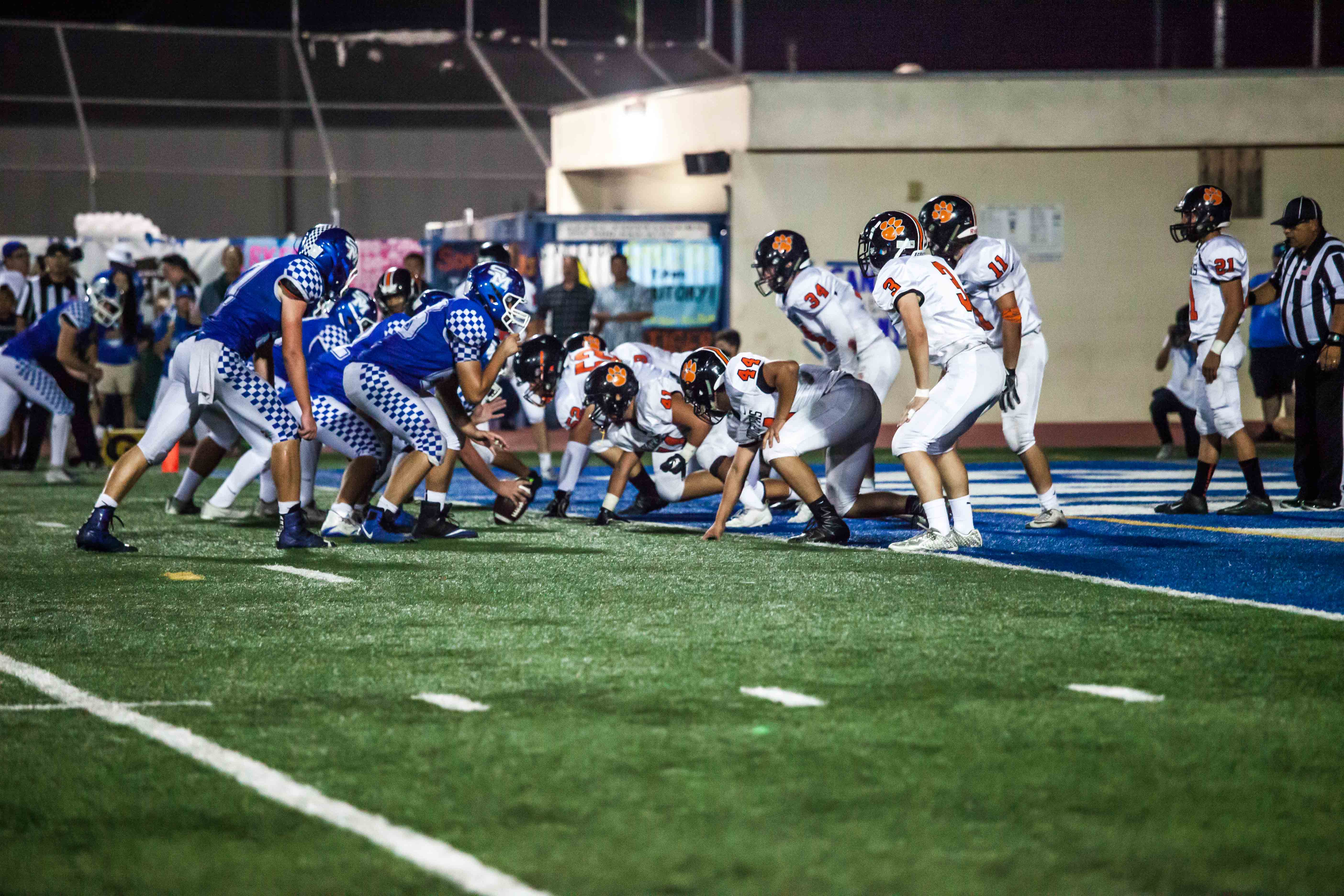 The Tigers’ second quarter goal line stand was one of the few bright spots for the defense.

While the crowd at the stadium was awed by a halftime firework show, the South Pas offense was unable to find a spark in the second half. Continuing the same trends of the first half, the Titans piled on touchdown after touchdown without any Tiger answer. With a running clock implemented in the fourth quarter, the final seconds of the game quickly ticked off to bring the 50-0 blowout to an end. South Pas will look to rebound with a better performance against a talented Monrovia team at home next Friday. Starting senior lineman Nathaniel Quirk is questionable to play, after suffering an injury late in Friday’s game. The loss would be big for South Pas, who are already dealing with numerous injuries on the O-line. Check out Tuesday’s print issue edition for more football coverage.