South Pasadena says farewell to the Class of 2016 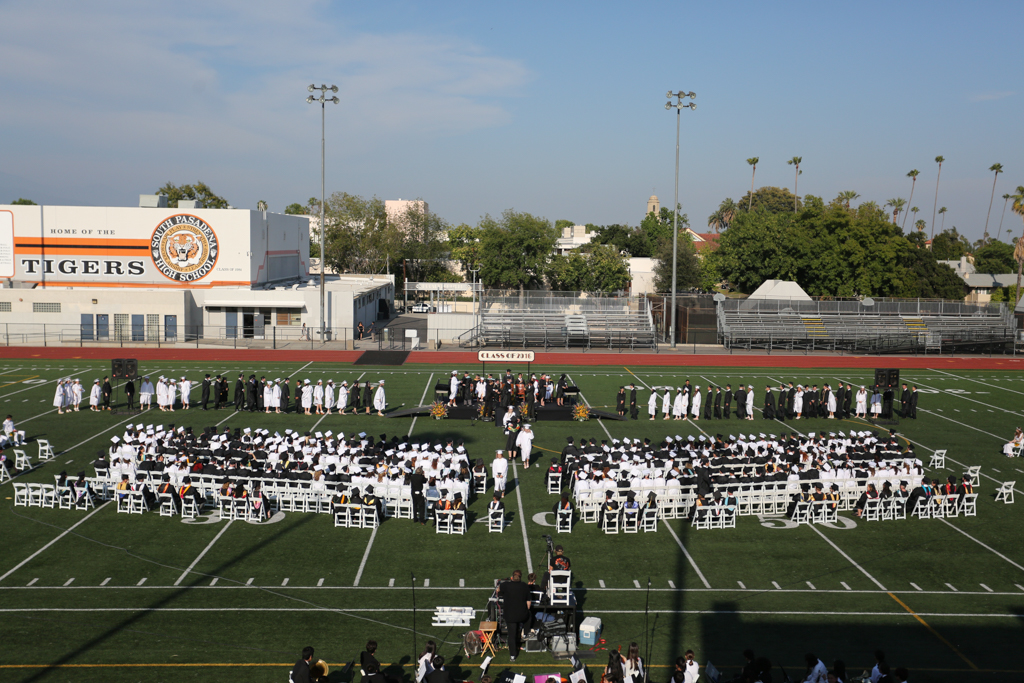 With the sun slowly setting behind them, South Pasadena High School’s class of 2016 gathered for one final time Wednesday to celebrate before a packed grandstand of relieved parents and enthusiastic friends.

Before splintering for destinations ranging from Thailand to Maine, the graduates took the opportunity to reminisce about four years of not only Math and English, but, more importantly, friendship and camaraderie.

Though the graduating class was likely the most racially diverse in the school’s 110-year history, the group celebrated as one as the students tossed their mortar boards in the air at the ceremony’s close before being congratulated by the faculty who guided them through their four years as Tigers.

The ceremony began with senior Abraham Szilagyi’s performance of the National Anthem. Senior class president Amador Lagunas then welcomed friends and family and introduced Dutch Clark, the first speaker. Clark’s speech, “A Little Advice,”, gave a nod to all the memories that the graduating class had shared. Senior Kristen Kafkaloff then took the stage to present her her speech entitled “Balance.”

“It was a little nerve-racking at first, not only because I was speaking in front of so many people, but because these were the last words I could ever say to my entire class,” Kafkaloff said. “I was just beyond grateful for the opportunity because high school and the people that I’ve met have impacted my life so significantly, I just wanted a chance to really thank them.”

Senior Vice President Mijin Kim presented the class gift: an audio visual system for the cafeteria and SAC room, which will be used to enhance the rooms and create more spaces on campus to express student voice.

After the final photo had been captured and the last graduate departed, the sun set on the baseball field and also on the class of 2016.