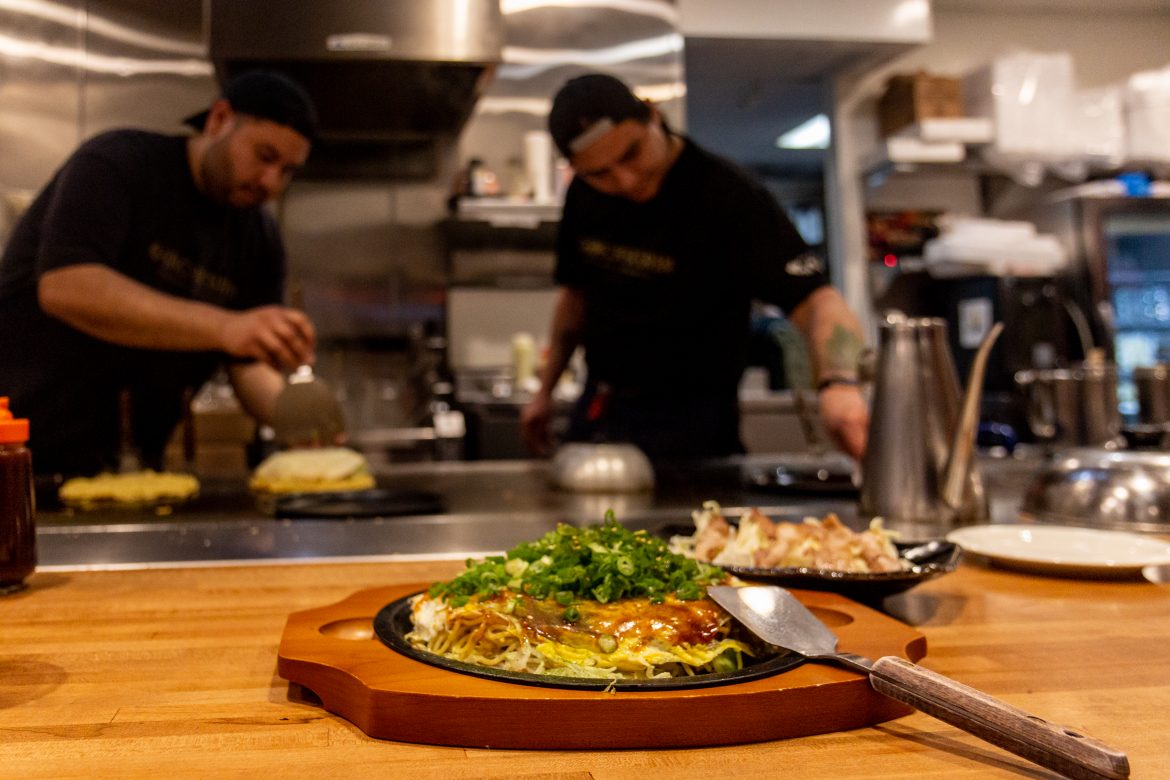 Hiroshima, Japan is often synonymous with destruction and suffering at the hands of the first atomic bomb ever dropped. The result was a city left in shambles and a world that would never be the same. As the people of Hiroshima began to rebuild the city, chefs would set up tents on the streets. Inside, one could find a teppanyaki (flat top grill) and four stools. The struggling people of Hiroshima would congregate here after extremely trying days. These tents were places of communion, laughter, and hope; the origin of okonomiyaki.

With little rice, almost no meat, and an impending food shortage, the chefs were forced to improvise in post-war Japan. The lack of rice was made up for in flour, an essential ingredient in making a thin, grilled pancake, which was then topped with flour noodles. Cabbage and bean sprouts, both cheap food staples, were added to make the savory dish more filling. As time passed and the city grew into the metropolis it is today, it became more common to find versions of the dish all over Hiroshima. Because of the dish’s historical significance, and ingenuity, the people of Japan have designated okonomiyaki as “Hiroshima’s Soul Food.”

The chefs at Chinchikurin in Little Tokyo greet customers with an extensive menu and a warm “irasshaimase!” which translates to “Hello, welcome to our restaurant!” A meat of choice, whether it be tender beef, chashu (pork belly), or ikaten (fried squid), can be added to the base of the plate. Okonomiyaki sauce, which is made from Worcester sauce and dates, is spread over a thinly prepared egg and laid over the platter. Despite these new additions and combinations to okonomiyaki, Chinchikurin never loses focus of the original flour pancake, noodles, cabbage, and bean sprouts.

Guests are able to sit at small tables with a teppanyaki and four stools, much like the tents in Hiroshima decades ago. Once the food is placed in front of you, chopsticks and a hera — a spatula traditionally used to eat okonomiyaki — are handed to those ready to devour the dish. Every presentational aspect of the restaurant, from the seating, to preserved photographs and slideshows of old okonomiyaki tents, contribute to the overall genuine Hiroshima experience.

At first glance to a novice customer, the dish is an unusual compilation of ingredients you would never think mesh well together. Despite any apprehension, each bite of the okonomiyaki was absolutely delicious. I ordered “The Hiroshima,” which included ikaten, chashu, and green onions. The pungent fried seafood flavor was balanced by the green onions and distinct flavor of the okonomiyaki sauce. The only issue was the cost: the dish was built during a time of poverty but the higher price tag ($15-20) somewhat undermines the purpose of the food, which was to unite people in a time of hardship without hurting your wallet.

Located in Little Tokyo, Chinchikurin is a short 20-minute train ride and an even shorter walk. Guests should be prepared to wait if you arrive during the lunch and dinner rush. But it’s well worth the wait — Chinchikurin serves its guests incredibly flavorful plate and provides an inviting space for all people, which is the ultimate purpose of okonomiyaki.

Senior Andrés Oyaga is super pumped to be taking photos this year for Tiger. He is eager to practice both his photography and editing skills.