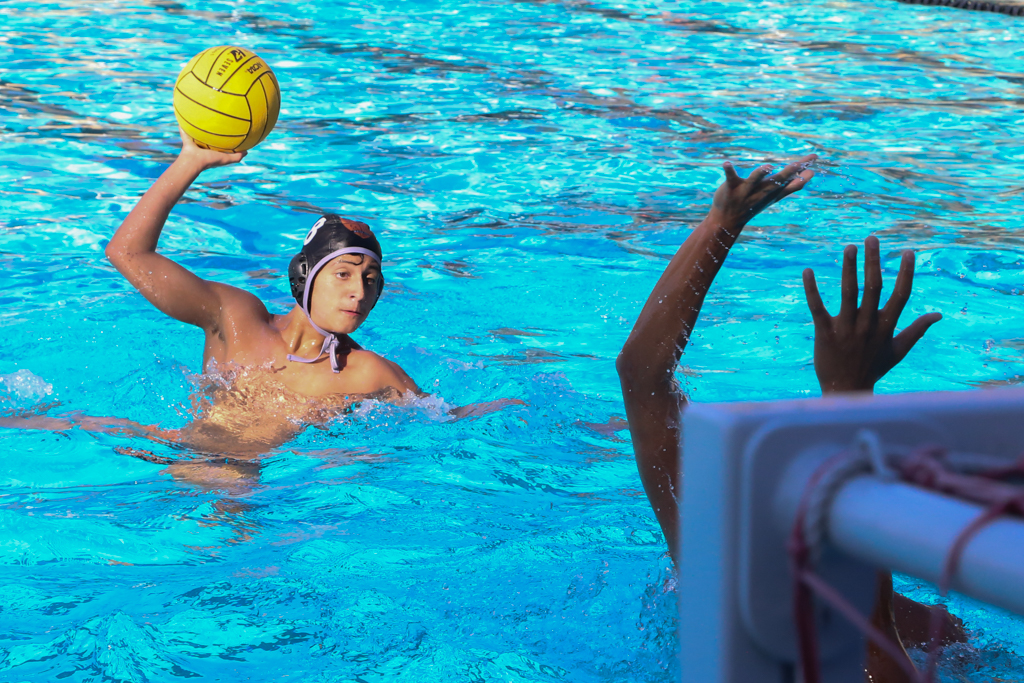 Freshman Maven Palacios squares up on the goal to take a shot.

Boys’ water polo was defeated by Temple City, 9-7, in a spirited match on Thursday, October 19, marking its second loss to the Rams this season. The Rams were superior early on, but the Tigers battled back with incredible effort. The loss, which drops South Pas’ league record to 5-2 and all but eliminates their hope of a Rio Hondo League title, doesn’t significantly diminish the Tigers’ chances of a CIF berth as they sit firmly in second place.

The Tigers’ pregame roar did little to faze the Rams. After senior captain Jasper Lee launched a strike that slammed into the right post, Temple City scored in transition. Lee hit the same post again, and the Rams countered with a shot to the top left portion of the net. Temple City continued to capitalize on its chances, later gaining a 3-0 lead as South Pas struggled to establish an offensive rhythm. The Rams’ intense pressure on the Tigers’ outside attackers forced a contested shot or a pass inside, where Temple City would intercept the pass. South Pas’ frustration manifested, as Coach Mike Gonzalez was issued a yellow card after the first period.

Temple City maintained its momentum in the second period, as a Ram attacker spun and scored despite being guarded by a trio of South Pas defenders. Seconds later, the Rams fired a shot into the bottom left corner, extending their lead to 5-0. South Pas called a timeout to regroup and discuss strategy. From that point forward, the Tigers grabbed control of the game. Freshman Dominic Kline rifled a shot that ricocheted off the top post but didn’t cross the goal line. Freshman goalie Liam Markus made a flurry of quality saves before senior Alex Fonseca launched a strike that hit the right post and landed in the left side of the net for the first South Pas goal. The half ended with a score of 5-1.

Temple City and freshman Maven Palacios traded goals amidst numerous fouls. As the third period progressed, the Tigers continued to control play. Taking a feed from freshman sensation Eddie Lane-Flanigan, Kline brought Temple City’s lead to three goals. Unfortunately, the Rams later capitalized on their limited opportunities, preventing the Tigers from minimizing the deficit in the third quarter. The horn sounded, and the third period ended with a tally of 7-3.

At the start of the fourth quarter, Kline took advantage of a Ram ejection and completed his hat trick with a laser to the top left corner of the net. Sophomore Evan Kowal brought the score to 7-5 with 5:44 remaining as he rocketed a strike through the hands of the Ram goalie. An ejection on the Tigers allowed the Rams to extend their lead to 8-5 before a Temple City player was ejected from the game. A heated conversation between the Temple City coach and a referee ensued, and the Tigers were awarded a penalty shot. Lane-Flanigan made a brilliant strike to the bottom right corner look effortless, bringing the deficit back to two goals with 4:18 to play and igniting the crowd. A controversial foul call on the Tigers led to a Rams goal, and Lane-Flanigan responded with a powerful putback on a rebound. Despite a fierce effort, South Pas couldn’t capitalize on its opportunities in the final three and a half minutes, and the game ended with a 9-7 score.

Boys’ water polo will face off against Monrovia on Tuesday, October 21, at Monrovia High School.