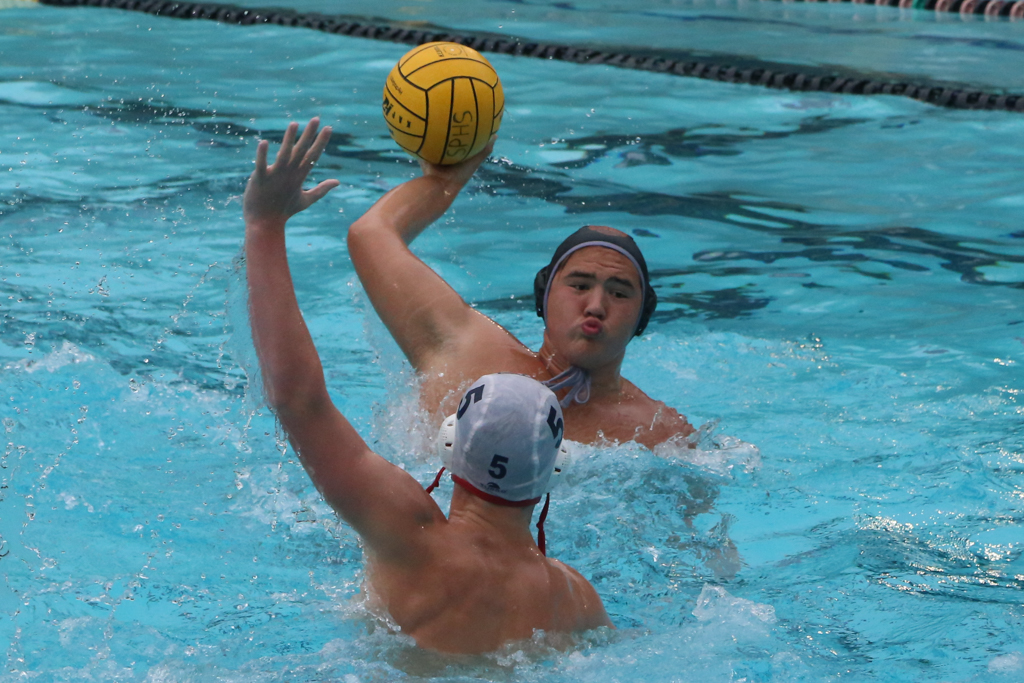 Senior Jasper Lee pulls back a shot over an ensuing defender.

In the first round of Division IV CIF, boys’ water polo routed Martin Luther King 16-8 on Tuesday, October 3. The Tigers displayed an excellent defense, stealing the ball and forcing turnovers on the vast majority of Wolves’ possessions. The squad also demonstrated its offensive dominance early on, and continued to do so as the game progressed.

In most of their games, South Pas was unable to click on offense from the start, which has put significant pressure on its defense. That was not the case against King, where the Tigers’ attack exploded thanks to fantastic efforts from sophomore Evan Kowal. After freshman Dominic Kline fired a strike off the top left post, the ball landed on the goal line, and Kowal followed up the play and shoved the ball in the bottom right corner. On the ensuing King possession, Kowal stole the ball and strided forward, launching a bullet that ricocheted off the left post and landed in the right side of the net. The Wolves managed to gain some momentum, as they threw a shot into the left side of the net to bring the score to 2-1. However, the Tigers responded quickly. From roughly nine meters away, Kline hurtled a rocket into the bottom left corner, before freshman Maven Palacios rifled a strike into the bottom left corner. The first quarter ended with a tally of 4-1.

Kline continued to expose the Wolves’ goalie’s achilles heel – the bottom left corner – as he launched yet another laser. After a goal by King brought the score to 5-2, the show known as Kline’s scoring routine resumed, as the freshman phenom threw an additional strike to the bottom left corner. Senior captain Jasper Lee tacked on a goal of his own, as he effortlessly fired a bullet into the right side of the net from approximately eight meters out. With 4:51 remaining in the second period, South Pas had already scored seven goals, the same amount they totaled in an earlier game against King in the San Diego tournament. Kline tallied his fourth goal of the game with a bullet from the left side, extending the Tigers’ lead to 8-2. Throughout the first half, South Pas executed its defensive plan to perfection, consistently intercepting passes and collapsing on Wolf attackers, forcing them to cough up the ball. Following a steal by freshman Eddie Lane-Flanigan, Kowal lasered a low strike into the bottom right corner to complete his hat trick. For his fourth and South Pas’ tenth goal, Kowal rifled the ball into the bottom left corner from the left side. The first half finalized with a score of 10-2.

King struck first in the second half, throwing an accurate, off-balance shot into the top left section of the goal. The Tigers then shut the door, suffocating the Wolves’ attack and revving up their high-powered attack. Jasper Lee launched into the air, firing a strike past the unprepared King goalie and into the right side of the net. Continuing his rampage from the first half, Kowal cut to the middle and received a pass before rocketing a bullet into the bottom left corner to increase South Pas’ lead to 12-3. Playing like the game was tied, the Tigers outmuscled and outplayed the Wolves, forcing King to commit offensive fouls and relinquish possession. Comparable to a great white shark, Lane-Flanigan launched out of the water with authority, planting a laser in the top left corner with 2:22 left in the third period. After some back-and-forth, the third quarter ended with a score of 13-3.

Seconds into the fourth quarter, Palacios stole the ball before passing to a cutting, open Kline, who fired a shot into, once again, the bottom left corner. After a great steal by senior Owen Carlson, Kline received a cross-pool transition pass and put the Tigers up 15-3. Following a King goal, a highlight-reel play by Jasper Lee epitomized the Tigers’ performance: while in the middle of the pool, Lee faded away and simultaneously lofted a perfect lob that tapped the left post and found the net for his third goal of the game. With roughly 3:00 remaining, Coach Michael Gonzalez made some lineup changes, inserting juniors Luke Quezada, Uday Sidhu, and Joshua Lee into the game. Although four King goals would be scored during that time, the Wolves held a man advantage for a few of the goals, which placed the juniors in a tough spot. The game ended with a tally of 16-8.

“We played a great game. We all had the right mindset and played hard,“Kowal said. “We’re on to Montebello.”

A focused, smart coach, Gonzalez had a similar view of the team’s performance:

“I thought the boys did a great job considering it’s their first real experience in the postseason. We did a good job of adjusting to the goals we gave up at center.” Coach Michael Gonzales said.” Kids still looked nervous, but we needed this game to get that out of our system. We will be ready for Montebello on Thursday.”

Boys’ water polo will face Montebello at Montebello High School in the second round of CIF on Thursday, November 2, at 5:00 pm. The Tigers defeated the scrappy Montebello squad in a preseason scrimmage in late August.

In the news this week, October 30th – November 7th