Boys’ water polo bounces back from loss with victory over Monrovia 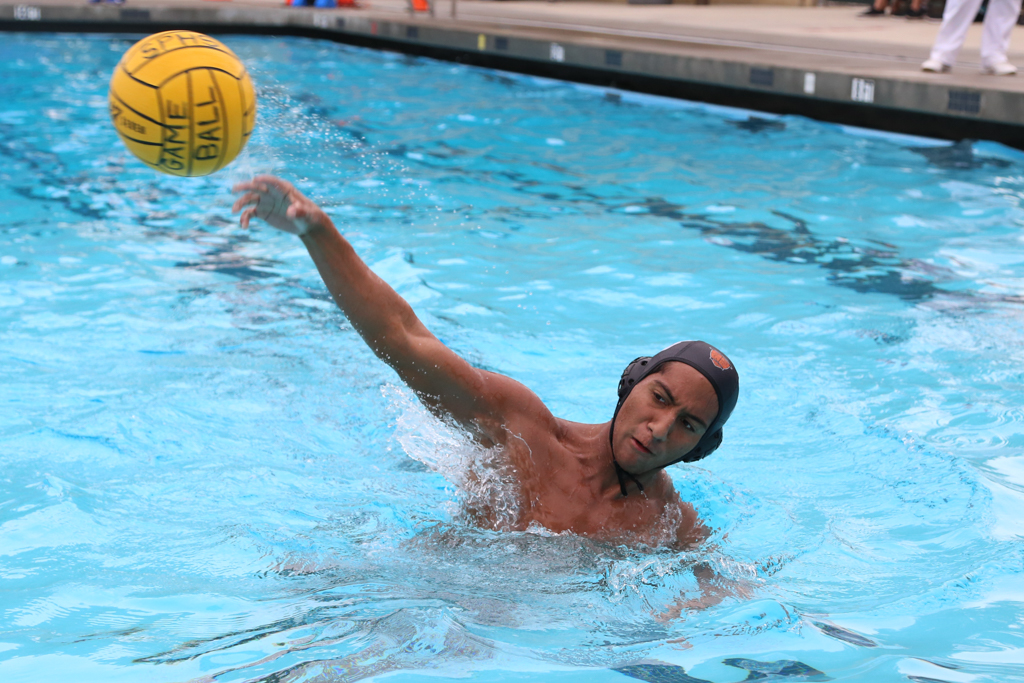 Following a devastating loss to Temple City, the boys’ water polo team rebounded on Thursday, October 27, with a 12-6 win over the Monrovia Wildcats.  The team used a heavy amount of subs in the game, including junior Alex Fonseca, who made his varsity debut in the second quarter.  Despite their reliance on bench players in the game, they still managed to tear Monrovia apart in transition and assert their strong press defense. The game was the third to last regular season game for many South Pas seniors and allowed them to celebrate the proud tradition of tomfoolery and domination within the program.

The match was similar to a scrimmage for the South Pas offense, as they were able to move the ball fluidly through the Monrovia defense and practice communication before their big game against La Cañada on Tuesday. After losing to Temple City earlier in the week, the team came out dominantly in the first quarter.  Senior Spencer Gurley opened scoring with a drive and score in five meter, giving South Pas an early 1-0 lead.  Senior Leo Sonner continued to be a big contributor for the South Pas offense, with two scores in transition in the first few minutes of the game. South Pasadena rolled to a 4-1 lead at the end of the first, after senior Cameron Benitez finished a Sonner rebound in two meter. Unlike their most recent victory against San Marino, the team did not need big performances to win the game.  Their success against Monrovia was more reliant on their continuity as a team, and collective performance on defense.

South Pas came out looking slightly less organized in the second quarter. Benitez scored first for South Pas, spinning and evading defenders near the goal to blow the ball past the Monrovia goalie. An avalanche of subs entered the game following a deep shot from senior DJ Myer that raised the score to 6-3.  Although South Pas was winning by a large margin, a series of arrant passes and turnovers allowed Monrovia to stay in the game. While the defense was working efficiently, they were allowing too many open shots on senior goalkeeper Robert Decker. The wildcats staged a small comeback at the end of the second, scoring two unanswered goals to make the score 6-5.

South Pasadena came back looking more prepared, holding only a small lead in the third quarter. Their offense was moving the ball well, and feeding Sonner, who was nearly unstoppable in transition. His monstrous four point third quarter included a nice shot from the perimeter, two scores in transition, and one goal over the middle on a pass from senior Nic Madrigal. By the time Sonner finished his demolition of the Wildcats’ defense, the game was practically over.

Players off the bench were able to distill the Monrovia offense for the remainder of the game, holding the wildcats to only one point in the second half. Their offense was continually powered by senior Kinan Rodriguez and Anderes Limon, who each scored once in the fourth.

Although the team is no longer contending for a league championship, the new competitive play rules may grant South Pas an opportunity to enter the constantly shifting CIF bracket. While the team did perform below their standard from last season, their potential could easily carry them a great distance if they do make a postseason appearance.  They will try to increase their odds of making the tournament on Tuesday, November 1, when they face the first place La Canada Spartans on the road. While winning the remainder of their games does improve their chances, a CIF berth would depend heavily on the losses of other contending teams.