Top Posts
Teachers voice concern over adopted learning models
Community may get a chance to vote on...
SPUSD outlines plans for distance learning during the...
Anti-Zionism cannot be equated with anti-Semitism
Anything goes?
L.A. complies with statewide protections and improvements for...
LARPing: an activity to experience the game beyond...
Residents voice encounters with the SPPD at virtual...
Why affirmative action is necessary
CIF announces athletic calendar for 2020-2021 school year
Home Featured Boys’ volleyball tops Jordan High School in CIF round one playoffs
FeaturedSportsWeb Exclusive 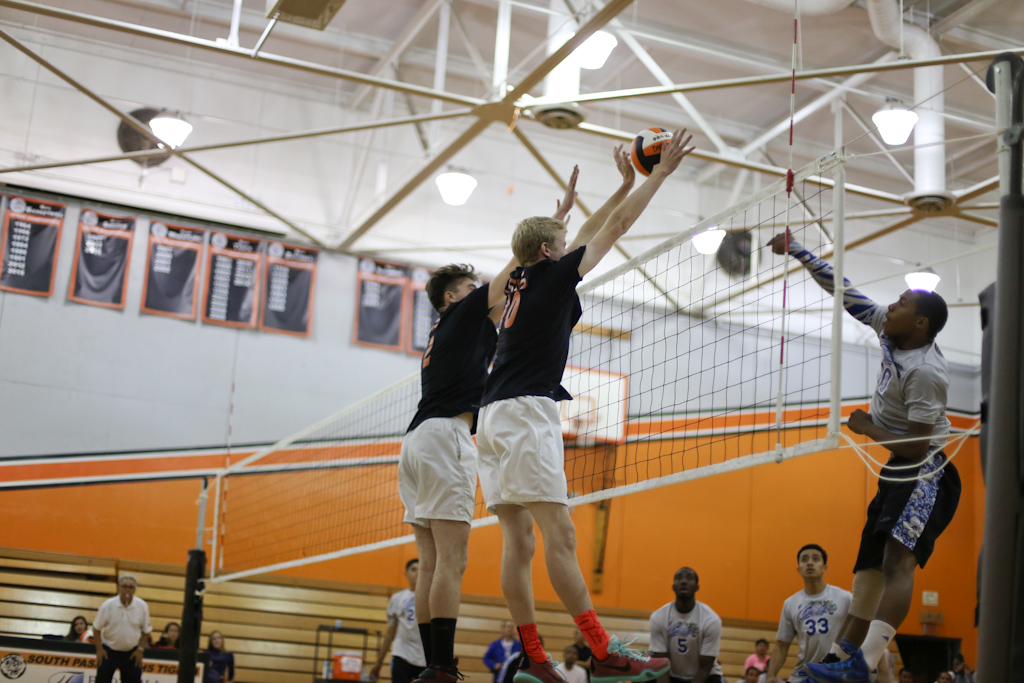 The boys’ volleyball team powered through the first round of CIF-SS Division II playoffs against Jordan High School on Tuesday, May 12, topping the Panthers in four-sets by scores of 25-21, 25-18, 22-25, 25-13. Although the visiting team held an evident size advantage against the Tigers, South Pasadena managed to work around it and advance to the second round of the postseason and rise to a 24-1-1 overall record.

Jordan utilized its edge in height right from the start of the match, establishing an early 6-8 lead off of solid blocking. Tiger hitters initially had a difficult time trying to penetrate the Panther defense and made errors on offensive attempts, furthering the deficit to 12-17, which forced a South Pas timeout from Coach Benjamin Diaz. The Tigers would bounce back after the break, however, and tie up the first set matchup at  17-17 with a 5-0 run started by junior Max Luck’s crucial kills and blocks that sent the crowd into a frenzy. South Pas did not look back from this point on; the Tigers switched the momentum on their favor to force Panther mistakes in hitting and receiving serves, eventually completing the comeback at 25-21.

Both teams showcased improved gameplay throughout the second set and kept the match even all the way to 7-7. Then, junior Scott Kawakami scored two aces with strategic serving to end the tight back-and-forth trades and turn the game flow in the Tigers’ control. Looking to finish out the set and establish a significant 2-0 lead in sets, South Pas sparked a 11-3 run from consistent defensive efforts from Kawakami and junior Alex Nakagawa to build up a significant 18-10 edge over the visiting team. The Tigers easily dropped the Panthers 25-18 and aimed to sweep the opponent for a first round 3-0 victory.

Looking to avoid the embarrassment of losing in three sets, the Jordan Panthers stepped up their game and quickly built a 4-0 lead. Junior Greg Luck would not allow the Tigers to flounder, however, and led the charge in erasing the deficit and coming right back to a point away from an almost equal match at 10-11. The Panthers fired back with their size advantage, creating a wall on the net to block many of Tiger kill attempts and go up 16-11. South Pas countered the visiting team’s run as the Tigers made a surge of their own to even up the match at 17-17 through superb serving and setting from both senior Aydin Pasebani and freshman Cole Schroeder. The Tigers would lose the tight battle in the third set as they saw themselves making multiple mental mistakes of leaving large empty spots on the South Pasadena’s side of the court for the Panthers to hit toward and gain easy points. South Pas gave up a set to Jordan with the set score 25-22.

The Tigers looked to bounce back from the sloppiness during crunch time of the previous period and they did just that, putting up points on the scoreboard with fantastic offensive plays under the Luck brothers’ strong threat on the net. South Pas went up 14-6 and forced a Panther timeout. Sophomore Matt Scholtz, who was recently moved up from the JV squad, came in with the Tigers up 22-12. Scholtz immediately made an impact by completing a kill and following it up with an ace. However, it was a Greg Luck kill that sealed the game, ending the 25-13 set victory and clinching a berth to the second round of the playoffs for the Tigers.

“They evidently had a size advantage, but we had the home court advantage behind the cheers of our encouraging fans,” junior Matthew Ng said. “ We were able to bring our A-game and we hope to bring out the same level of intensity and energy in our upcoming playoff matchup.”

South Pasadena will travel a long distance to Camarillo for the second-round matchup against Camarillo Scorpions on Thursday. The Tigers hope to improve to a 25-1-1 overall record and most importantly, a spot to the semi-finals in the CIF-SS Division II playoffs.