Top Posts
CIF postpones practice and competition start dates for...
‘Borat Subsequent Moviefilm’ suffers from sequel syndrome
Athletics has potential to be more than competition...
Calculus for a Cause set to host virtual...
On America’s pseudo-democracy and paths of amelioration
Economic frustration must be directed at the extremely...
TAAGLAA: Drive-in movies
Public school P.E. curriculum needs to be reformed
Coronavirus surge results in greater restrictions
The unexpected feminism of ‘The Queen’s Gambit’
Home Featured Boys’ tennis strives for consistency in Rio Hondo League play
FeaturedSportsWeb Exclusive 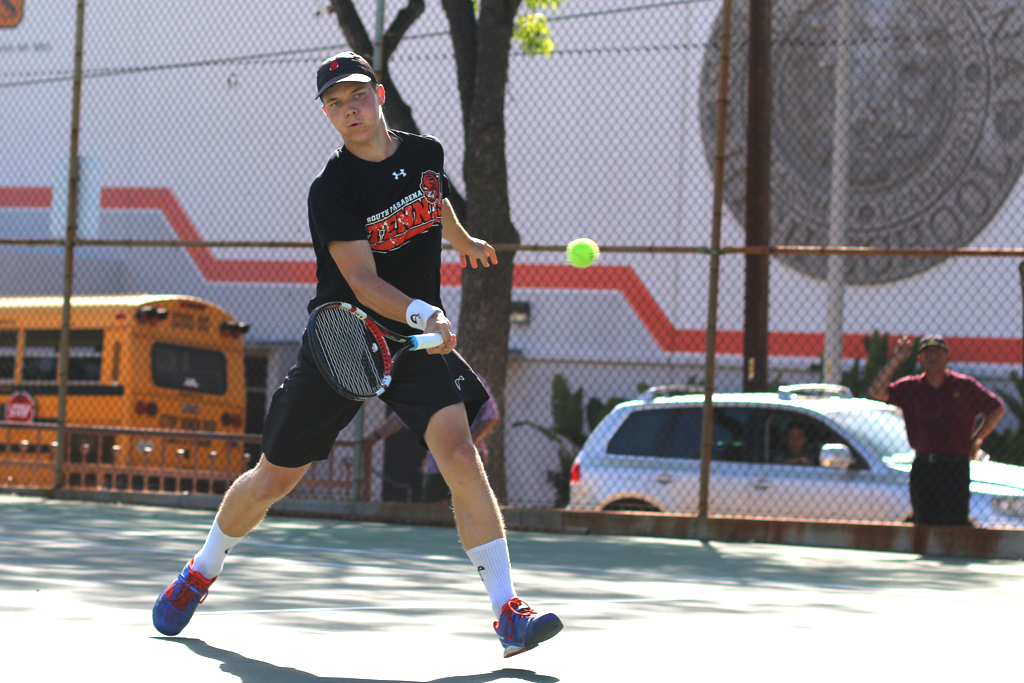 The varsity boys’ tennis team faltered against the first-place San Marino Titans in a one-sided match, losing 17-1 in the away match. Despite the loss, the Tigers have solidified their place as the second best team in the Rio Hondo league, after sweeping Monrovia 18-0 last Friday and defeating La Canada on April 1 with a 13-5 score.

Two of South Pasadena’s four losses of the season came from the nationally-ranked San Marino team, which returns many of its players from last year’s CIF championship group. Nevertheless, the Tigers were able to adjust to the fast-paced style of the experienced Titans with sophomore Simon Stans defeating one of the Titans in singles play. South Pasadena’s record through league now stands at 3-3 and 8-4 overall.

Raju finished his singles 2 matches 2-6 and 0-6. Stans lost his first two games 0-6 and 0-6, but was able to defeat San Marino player John Carter 7-5 in a tightly contested match. On the doubles side, juniors Kevin Huang and Jason Cai finished 2-6, 2-6 and 1-6. The other two teams in juniors Anthony Chen and Hoyt Gong, along with freshman Eamon Hornish and senior Nick Samson  were not able to defeat the aggressive Titan doubles teams.

On March 25, the Tigers also experienced a setback when then-coach Marivick Mamiit stepped down from the head coach position after deciding to join the police academy. Since then, past-JV coach Karlos Huschke-Favela has been leading the way for the Tigers as they look to qualify for the CIF playoffs.

The Tigers have counted on their flashes of resilience all season, and hope that they can bounce back from the loss quickly.

“The next game is very important because it could help solidify our spot in CIF,” Raju said. “We plan on practicing on our consistency and conditioning for our next match.”

The Tigers now look forward to their next game in Friday, April 22, where they will face off against a La Canada team that has beaten the Tigers once already this season.

“I’m really looking forward to Friday’s game,” Stans said. “It is going be great playing at our home court, and I think we will do great in both singles and doubles matches because our team is more motivated the second time around.”