Boys’ soccer: Tulin comes through in the clutch again to keep Tigers undefeated 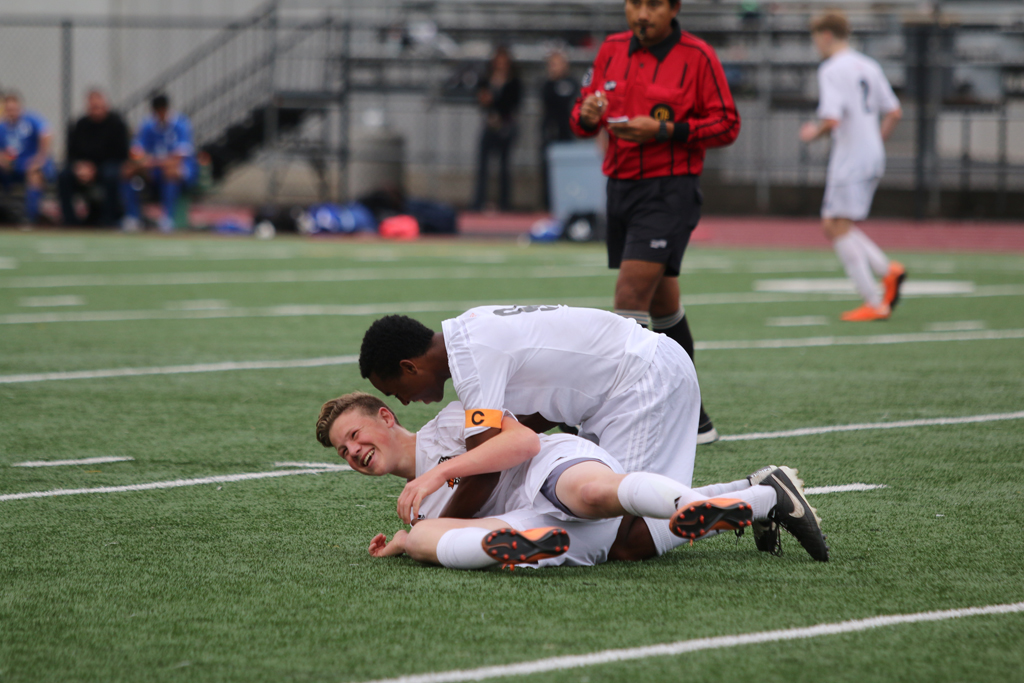 By lifting the Tigers to their second straight last-minute ending with his game-winning goal on Wednesday, junior James Tulin has solidified the nickname Mr. Clutch. After a physically intense game left the Tigers in a 2-2 situation with the end in sight, Tulin fired a goal in the San Marino net that put the Tigers up, ultimately winning the game. This clutch performance from Tulin is identical to the team’s game last week against Monrovia, when he saved the Tigers from a 2-2 tie with an eleventh hour goal. The win keeps the Tigers undefeated in league at 5-0.

The Tigers played with great forcefulness on defense, led by senior captain Oscar Jaime III. Jaime made himself present in the box, defending multiple Titan crosses and ruining countless opportunities for San Marino.

South Pas’ offense came out aggressive and assertive. About eight minutes in, senior Jordan Jackmon carried the ball down the sideline, and crossed it into the middle of the field. What looked to be like a quality cross ended up in the goalie’s hands. After ten minutes of play the Titans seemed to have found their offensive footing. Despite an improvement in play by the Tigers, fouls and offsides calls contained their offensive threat. Despite this, the Tigers continued to get closer and closer to the box. Then, in the 17th minute, senior Ramon Gutierrez executed a corner kick beautifully into the middle of the field where junior James Anderson was waiting to head the ball into the back of the net, giving the Tigers a 1-0 lead.

Continuing to make plays on defense, Jaime stopped San Marino’s counter attack with authority, hindering their offense with great defensive execution. The Titans caught a break when the Tigers were called for an unintentional handball in the box, setting San Marino up for a penalty kick. The Titans scored the equalizer on the resulting kick, tying the game at 1-1. Soon after, Jaime was awarded a yellow card for an overly aggressive tackle, which gave the Titans a chance to take the lead with a free kick from just outside the box. A powerful strike from San Marino just missed the top of the goal post, keeping the game tied. As the first half was coming to an end, the Titans made one final effort to go up, but were ultimately unsuccessful. The game went to halftime tied at 1-1.

The Tigers came out in the second half just as aggressively as in the first, and were presented with another chance when Gutierrez was given a free kick. He blasted his shot off the goalie’s and rebounded the save for a second chance, but missed wide. In the Tigers’ next possession, junior Oskar Hernandez weaved through a few defenders and placed the ball in senior Kevin Yonami’s possession, where it was cleared by Titan defenders.

On San Marino’s counter attack, senior goalie Sam Hoadley-Brill was caught a little too far out of the box when he was one on one with a attacker. The Titan striker came out with ball and took a shot at the abandoned goal, which just sailed over Jaime’s head. Junior Clayton Kabealo was the last line of defense, and after realizing he wouldn’t be able to prevent the goal any other way, stuck his hand out and caught the ball before it made it’s way into the net. He was immediately rewarded with a red card and the Titans were given another penalty kick. San Marino fired this in for their second goal of the game, taking the lead midway through the second half.

“The red card in the second half really opened up our eyes and shocked us into the fight for the win,” Jaime said. “In the first half, we had to step to the ball quicker, not allowing the other team to connect their passes. On offense, we had to create more opportunities and finish the ones that came our way.”

Later on in the half, the Tigers had a chance to tie the game up with a corner kick. Gutierrez laced a ball a little low, which rebounded all the way back to him on the sideline. A great second effort by Gutierrez set Jackmon up perfectly for a header. The Gutierrez-Jackmon hookup put the Tigers equal with the Titans at 2-2. The Tigers weren’t done there as Gutierrez passed it to Hernandez, who placed it in front of Tulin with room to run. Tulin was open down the sideline as he took a shot. The San Marino goalie couldn’t contain the sheer power of Tulin’s blast, and, despite him initially saving the ball, its momentum carried both it and the goalie past the goal line, just barely giving the Tigers the 3-2 lead with just minutes to spare. The Titans had a few more chances to tie the game up, but most offensive attempts by them were shut down by a revitalized Tiger defense. The final whistle was blown, and the Tigers celebrated their tense comeback victory in front of their home crowd.

“San Marino played a good game which deviated from our game. We couldn’t control the ball or keep possession for long periods of time, and there may have been a few questionable calls which got our team frustrated,” junior Animesh Mangu said. “We showed the grit we’ve had all season and fought back despite not playing one of the best games of the season. Down one man and a goal, we showed why we are undefeated in Rio Hondo.”

Immediately after the game ended an infuriated San Marino coach sprinted across the field to argue with the line judge who called the crucial final goal. The confrontation got heated, and post-game ceremonies were put on hold as the red-faced Titan coach could be heard screaming at the official throughout the entire stadium. Eventually, after being corralled by his colleagues, the coach was given a yellow card.

The Tigers are on the road this Friday, January 28, when they will look to improve their record to 6-0 with a win over Blair High School.