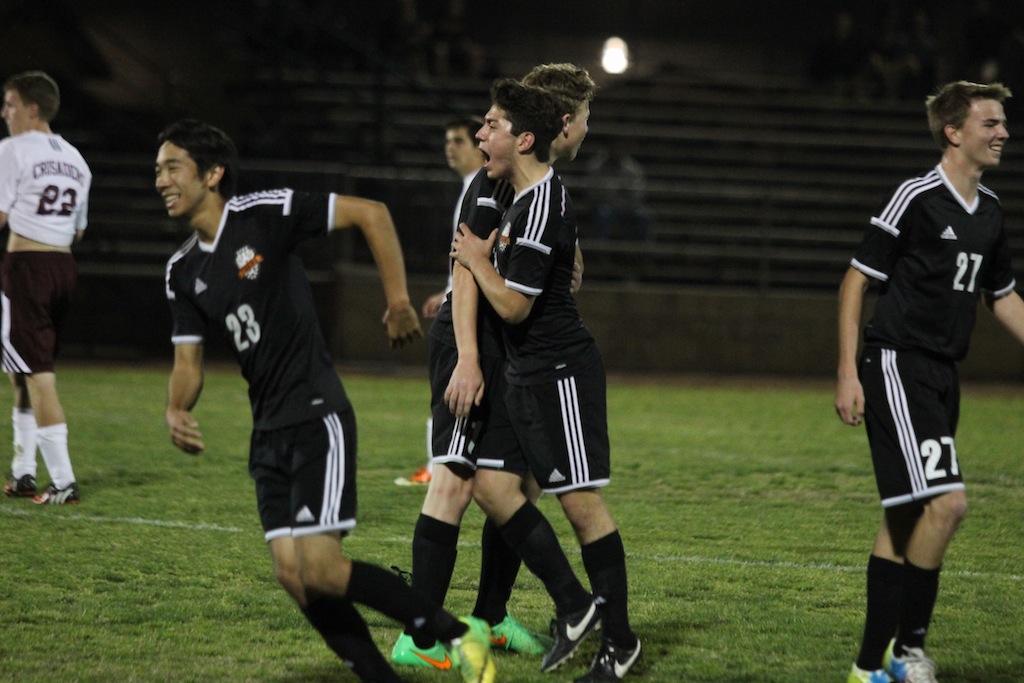 The boys’ soccer team advanced to CIF quarterfinals on Wednesday, February 25, after a 2-1 road win over the Valley Christian Crusaders. The physical game saw numerous cards and fouls, and the two teams were visibly frustrated. The Tigers, however, kept their composure, and outlasted the Crusaders to secure a second round win. The win was especially impressive as the Tigers were missing four key players due to injuries, including senior captain Oscar Jaime III and senior Patrick Nelson.

The game was broken open a minute into the game, when senior speedster Justin Fernandez crossed the ball in with his head, giving junior Oskar Hernandez an easy tap in goal. The Crusaders took some time to get their offense going, but found their footing 15 minutes in, when a deep throw in was deflected into the Tigers’ goal, tying the game up at 1-1. Neither team could break through the opposing team’s defense, and the half ended with the score at 1-1.

The Crusaders were looking to score right away in the second half, and took a shot which nailed the Tiger crossbar, but missed. The Tigers were now on the counterattack against a chippy Valley defense. The Crusaders were larger in stature, and used this to their advantage by out-muscling the South Pas strikers. The height difference came into play as well, when Crusader defenders towered over Tiger attackers on corner kicks and throw ins. The Tigers started using the one physical advantage they had on the Crusaders: speed.

Senior Sam Anuakpado, whose blazing speed has given defenses trouble all season long, was fed a through ball, which initially seemed out of reach. Anuakpado turned on the afterburners, and bolted past the Valley defenders on his way to a breakaway goal. Possession bounced back and forth between the two teams, and the physicality of the game rose. Players on both teams were being manhandled by defenders, and the liberal referee chose to play on more often than not. This was a detriment to both teams, as the Tigers couldn’t get much going with Valley’s defense outmatching them physically, and the Crusaders began to get heated, and couldn’t keep their mind in the game. Valley created a couple of chances for their seldom-used strikers, but senior Kevin Yonami was there to track both of them down. The Crusaders were overeager to score the equalizer, and had multiple offsides penalties called on them.

Senior captain Ramon Gutierrez had been controlling possession in the midfield all game, when midway though the second half he hit the ground in serious pain. Play stopped for about a minute, and Gutierrez got up and chose to play though the pain. The Tigers used this to start their attack on the Valley goal back up, and Fernandez was the first to take a shot, missing just up and to the left. Fernandez had another chance, when he received the ball just outside the box, and took a shot while falling backwards on one leg. This shot too, would miss just over the top of the goal. Anuakpado had another breakaway which seemed promising, as he crossed the ball into the box. Junior James Tulin was there, but couldn’t handle the high pass. Senior Jordan Jackmon ended up with the ball, but couldn’t find an opportunity for a clean shot, and missed to the left.

Jackmon and Anuakpado sped the ball up the field, but neither of them could net the ball. Valley had a chance when, after a counterattack, a big throw in acted as a cross into the South Pas box. The ensuing shot went off the crossbar, and the Tigers avoided a narrow goal. Anuakpado and a Crusader defender began to get overly physical with each other, and Valley was given a yellow. Another throw in for the Crusaders threatened the Tiger goal, but goalie Sam Hoadley-Brill was there to stop it. Valley made one final push, but the Tiger defense was ready. The penalized Crusader was given a second yellow, and soon after a different player on Valley received a card. The Crusaders couldn’t find any chances on goal, and South Pas iced the game, up 2-1.

The Tigers take on Rancho Mirage on the road in Palm Springs this Friday in CIF quarterfinals. The number one seeded Tigers will look to advance to semis with their fourth straight win.

Wrestling team fails to qualify for Masters after CIF individuals

Girls’ basketball advances to semis with win over St. Joseph