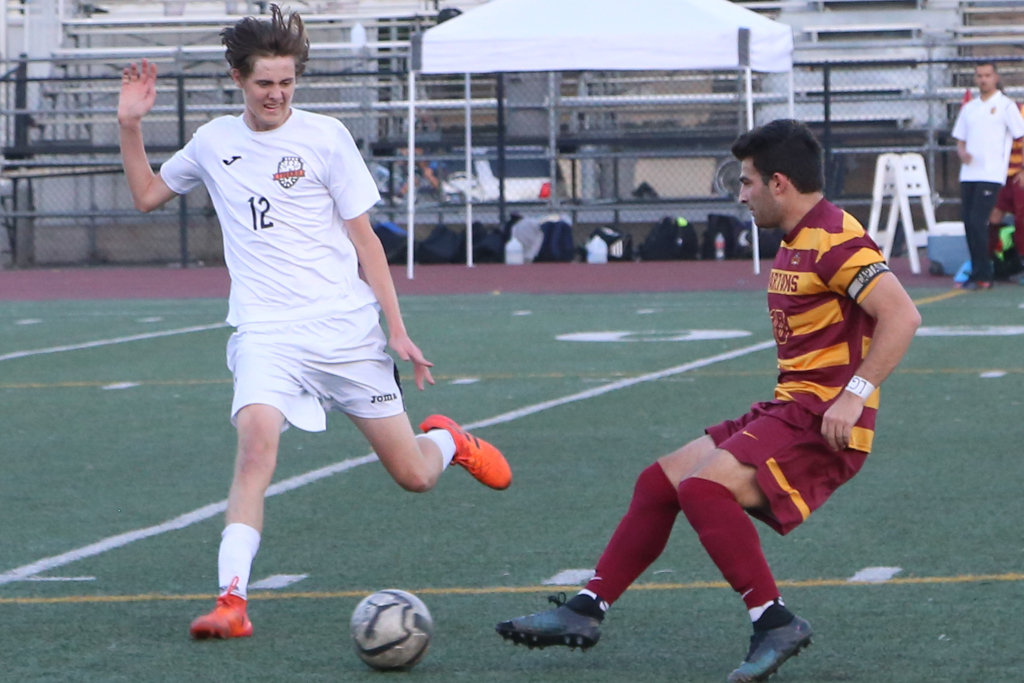 Junior Eamon Hornish battles for a ball near midfield during the stalemate between the South Pas and La Cañada.

Boys’ soccer secured a 0-0 tie in a high-stakes matchup against the first-place La Canada Spartans on Friday, February 2. With the draw, the Tigers drop back to fourth in the Rio Hondo League, now finding themselves outside a CIF postseason berth.

The first half featured a series of missed opportunities and solid defensive play, which kept the two teams scoreless. On the offensive side of the ball, the Tigers best chance came off a shot from senior forward Jack Renken. Renken, South Pas’ leading scorer, cleared a La Canada corner kick and dribbled past multiple defenders to the Spartan box. However, once in scoring position, he failed to get it past the opposing keeper. For South Pas, senior goalie Jack Gallagher made numerous stops in the goal, including a diving save during a Spartan breakaway in the dying moments of the half. Along with Gallagher, strong defense from senior Hank Rainey and junior Sage Pierone kept La Canada off the scoreboard.

The second half was also defined by errant shots and strokes of good fortune for the respective defenses. Sophomore Kevin Kang had two shot attempts in a span of five minutes in the half, but both just narrowly missed (the first one tipped and saved by the goalie and the latter just high).

The half rumbled on, with both teams struggling to convert on the offensive side of the ball. Finally, with just two minutes remaining in the game, La Canada thought they got their lucky break. Following a La Canada throw in, a Spartan player found himself open and took a shot, which was deposited into the back of the net. The potential game-winning goal was called back, however, as the referee ruled that the Spartan player had brought his foot over the line on the throw in. The game ended moments later as a 0-0 tie.

South Pas’ biggest game of the year will come next Tuesday, February 6 against the Temple City Rams. The Rams are currently in third place in the Rio Hondo League with a 4-4 league record. If Temple City beats South Pas, the Rams will clinch third place and knock the Tigers out of postseason contention. Temple City won the last matchup between the two teams by a score of 3-1.