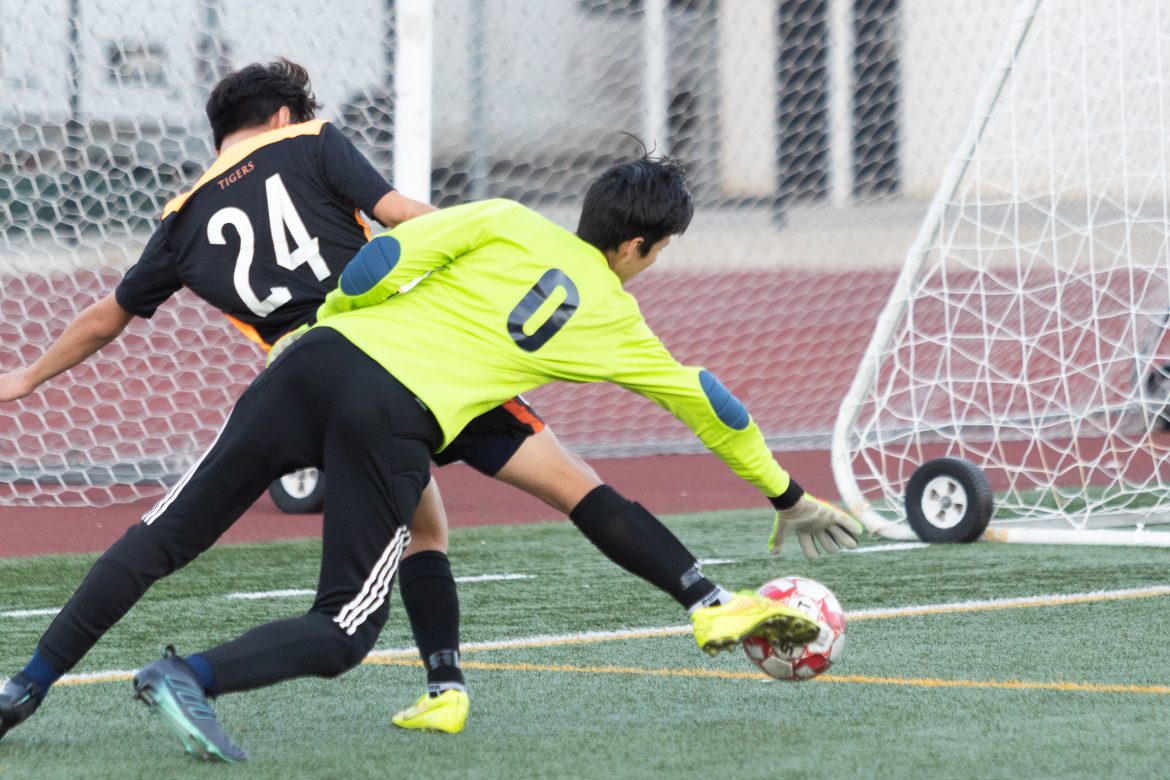 The Tigers scored six first half goals and had no trouble dispatching the Vikings.

Boys’ soccer blew past Blair by a score of 9-0 in a road match on Tuesday, January 29. The win marks the Tigers’ fourth consecutive triumph in league and improves their league record to 6-3.

The Tigers entered the first half in dominant fashion, immediately wresting control of the ball and advancing towards the Viking goalpost before the Blair players could collect themselves. South Pas’ superior speed, coupled with tight passes stemming from a strong formation, saw the team dominate the midfield. The visiting offensive quickly reached and bombarded the post, with sophomores Kevin Ebata and Caleb Lee claiming two goals each before twenty minutes had expired on the clock. A 4-0 lead proved unsatisfactory for the Tigers who, despite being forced to confront a gradually recovering Viking defense, were unrelenting in their attacks. The half ended after two more successful runs on the goal in an astounding 6-0, leaving little doubt that the Tigers would hold onto a strong lead for the remainder of the match.

The second half proved to be as one-sided as the first, with the Tigers beating out Blair on both offensive and defensive fronts. South Pas rarely surrendered ball control to the Vikings thanks to both masterful offensive maneuvers in individual plays and consistent pressure to catch out the clearly drained home backline. The Tiger midfield skillfully executed the latter, with junior Jake Han and freshman Arden Benitez making crucial plays to frequently advance the ball well within shooting range. Benitez claimed the first goal of the half near the halfway mark, setting the score at 7-0. Soon after, Benitez crossed the ball to midfielder Jonah Beadle, assisting the senior in his first goal of the season. Senior Addison Foord utilized a skillful header to finally dispatch the Vikings, with the half ending in a decisive 9-0 win for the Tigers.

The boys’ team hopes to go out on a high note in its final scheduled match of league play on Thursday, January 31 against Temple City at home.