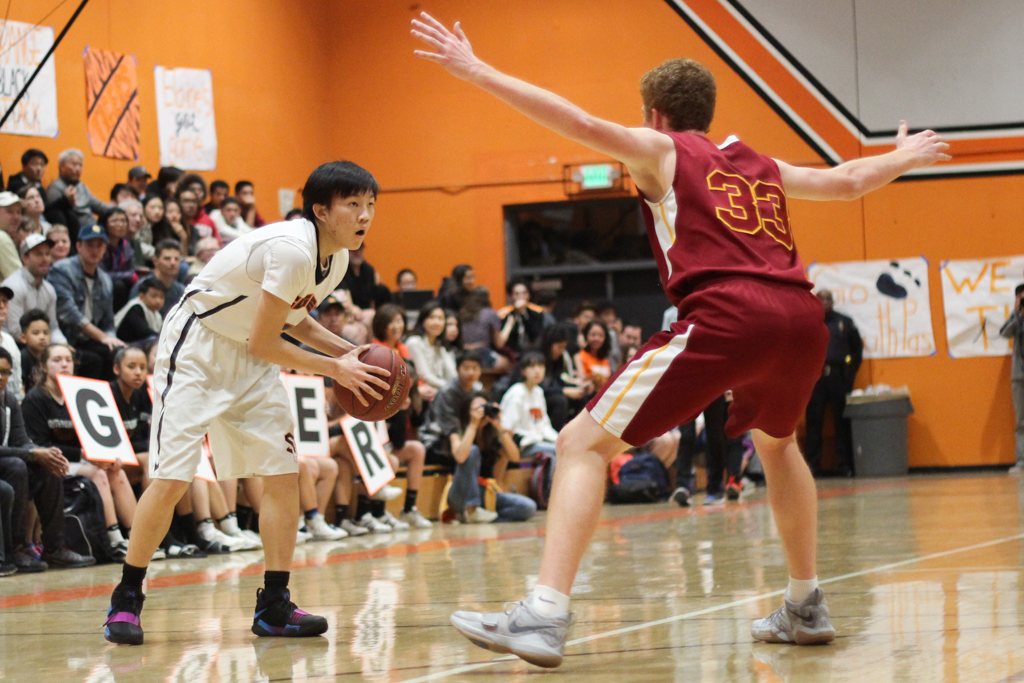 Senior Matt Mayemura squares up his defender, preparing to make a move. The Tigers would fall 56-40 the rival Titans.

Boys’ basketball suffered a 56-40 loss to the rival San Marino Titans in their first league game of 2019 on Saturday, January 5. Although the Tigers were able to fight their way back into the game in the second half, the slow start from South Pas proved to be too costly.

From the opening tip, the Tigers were unable to find their rhythm on the offensive end of the floor. Plagued by turnovers all night long, along with a cold outside shooting night, South Pas had trouble manufacturing offense against the taller Titan defenders. Aside from two field goals from lefty seniors Louis Jamerson and Sebastian Au-Rivera, the Tigers found hardly any good looks in the first quarter. Au-Rivera finished with 13 points and was the Tigers’ leading scorer. On the other end of the floor, the Tigers allowed dribble penetration and easy layups to San Marino. South Pas quickly found themselves trailing 26-12 at halftime.

In the second half, the Tigers began to mount a comeback behind senior Jack Gordon’s play off the bench. With a three-point jump shot and a finish the lane in the third quarter, Gordon helped give the Tigers new life. Along with eight more points from Au-Rivera in the fourth quarter, South Pas climbed back to down just seven with four minutes remaining. Unfortunately for SPHS, a pair of three-point baskets from San Marino sealed the deal.

“We started off very slow offensively, but we preach resilience and brought more energy in the second half,” Gordon said. “I tried to be aggressive when I got in the game, but only scoring 12 points in the first half won’t be enough to get the job done in league.”

South Pas will hope to even their league record at 1-1 when they travel to Temple City on Tuesday night to take on the Rams.