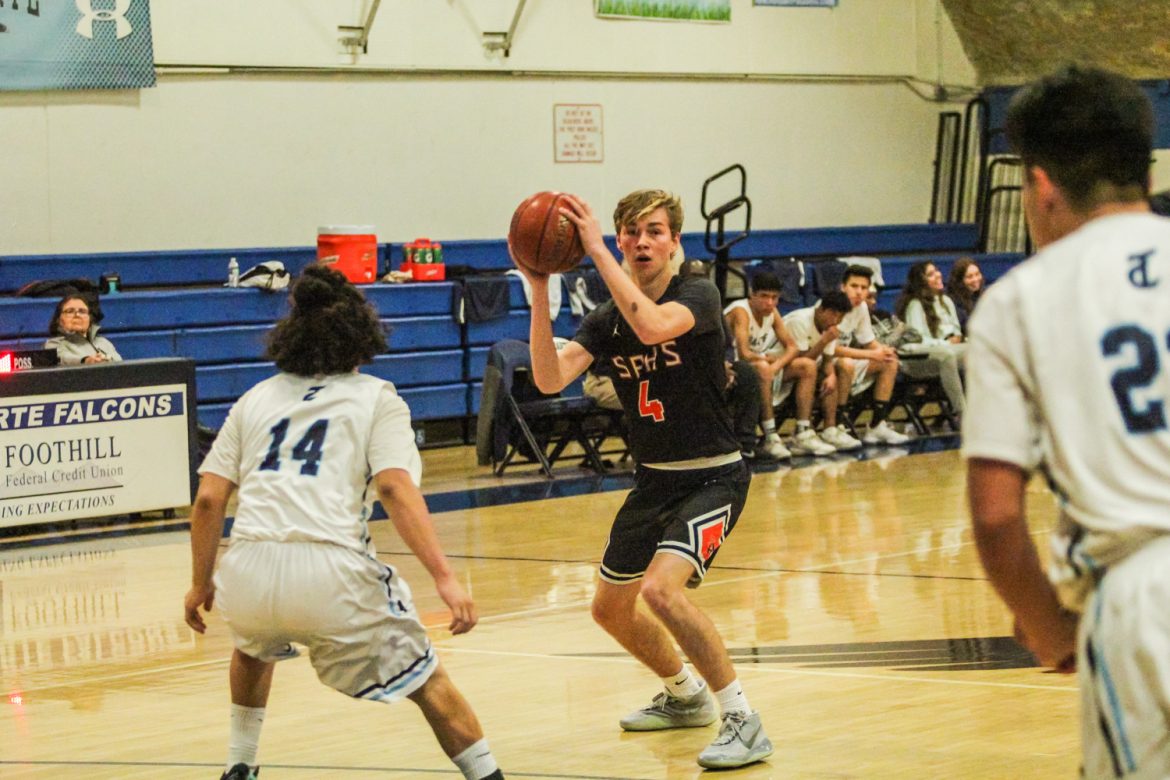 The Tigers look to rebound against Alemany on Saturday, Apr. 17.

Boys basketball suffered a narrow 44-41 defeat against the Flintridge Prep Wolves in its season opener on Friday, Apr. 16. In a slow-paced slugfest filled with whistles and turnovers, the Tigers were unable to take advantage of opportunities down the stretch, and took its first loss in the new SPHS gym.

“It was a little struggle at first,” junior guard Dillon Akers said. “[Junior center Sage Wayans and I] grew up playing together and senior [twins Tyler Johnson and Chase Johnson] have been playing together their whole lives, so getting used to playing as a whole after being duos our whole basketball careers was a challenge.”

Those chemistry issues manifested in a high number of turnovers that plagued South Pas throughout the game. And although the team flashed signs of a suffocating defense for a few possessions, it was unable to contain Flintridge Prep’s dribble penetration in the second half.

The first quarter brought an ugly eight minutes of jungle ball. Both teams struggled offensively, throwing errant passes and being careless with the ball. Akers finally drained a triple for the Tigers’ first points of the season, and the Wolves took a 10-5 lead into the second period.

South Pas stormed out of the gates in the second quarter with 11 unanswered points to take a 16-10 lead. The squad flew across the hardwood, mixing in a variety of defensive looks to turn multiple turnovers into baskets, including a smooth euro-step layup from junior forward Niko Lawrence.

Akers continued the Tigers’ success in transition: The transfer from Buckley snagged a Wolves’ airball and snapped a half-court outlet to a streaking junior Ezekiel Pannell for another lay in.

But Flintridge Prep remained calm and chipped away at the lead as South Pas’ momentum evaporated. Without the usual rowdy crowd, the home team went cold offensively and saw its lead dwindle down to 19-18.

“It’s a completely different energy in the gym,” Akers said. “For someone who feeds off of the fans being able to cheer, it’s a lot harder trying to recreate that with just the bench.”

The Wolves switched to a 2-3 zone to begin the second half, forcing a handful of Tiger turnovers. On the other end, the South Pas defense faltered, allowing easy dribble penetration; Flintridge Prep seized a 27-22 lead after a series of free throws and layups.

As the opposition continued to find ways to score, Chase Johnson kept the Tigers in the game with his jumper. He hit three tough shots, including a high-arcing trey and a stepback bank shot from the top of the key, pulling the Tigers within three.

“I figured that somebody [has to] start hitting shots,” C. Johnson, who finished with a team-high eight points, said. “I also knew that most of [Flintridge Prep] couldn’t really guard me off the dribble and anticipated a drive, so I just started pulling up instead.”

However, two consecutive turnovers allowed the Wolves to sink easy transition buckets, which increased their lead to eight. The Tigers wouldn’t back down and implemented a quick full-court press to force a 10-second violation.

Now with possession of the ball, junior forward Jonny Guy drilled a corner three to cut Flintridge Prep’s advantage to 43-41 with 1:19 remaining. Still, South Pas was unable to get over the hump and missed three potential game-tying shots and Flintridge Prep escaped with the win, 44-41.

“It was a rough start, but towards the end, we really saw what we are capable of doing on a nightly basis,” Akers said. “Overall, we didn’t play our best basketball and didn’t perform the way we wanted to, but as a team, we accomplished a lot when it came towards building our character.”

The Tigers will hit the court again Saturday, Apr. 17, to face Alemany, a CIF Division I team.

“Free throws killed us. Missed layups, turnovers, and we didn’t get into the defense we wanted to play,” C. Johnson said. “Tomorrow, we are playing a much better team and we know what we have to do. Now, it’s just a matter of execution.”